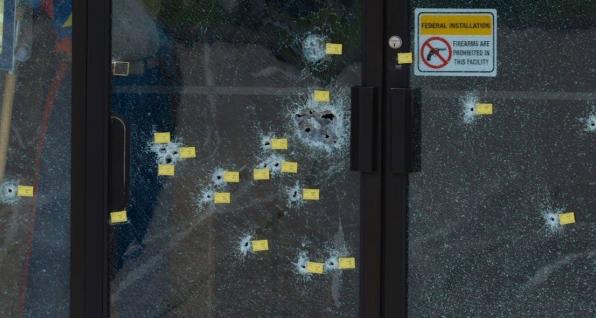 "[T]he Army's chief of staff says the military has to be careful about over-arming itself. Gen. Ray Odierno says that can lead to "accidental discharges and everything else that goes along with "having loaded weapons." - Associated Press, July 15, 2015

No, this isn't an article by famed satire website TheOnion.com. The United States Army's chief of staff really did say that. In the wake of yet another terror attack against our military personnel on United States soil, the most senior uniformed officer assigned to serve in the Department of the Army really did push back against Americans who asked a question even a five year-old who heard about the attack would ask:

"Why didn't the Marines shoot back?"

In the wake of this latest terror attacks on American soil, we are reminded of just how wrong victim zones and gun restrictions are. Like the recent slaughter of a bible study group in South Carolina, this attack proves that disarming good people endangers them, and those around them.

A now-infamous photo of the Chattanooga recuiting center's bullet-ridden glass door with a "no-guns" sign has served as a wake-up call to many Americans, who are proving to have no patience for seeing their service members gunned down without the ability to fight back. That's why the governors of Florida, Louisiana, Arkansas, Oklahoma, Texas and Indiana have ordered National Guard members at offices and other facilities to be armed in the wake of attacks that left five servicemen dead in Tennessee. Utah's governor said the National Guard was authorized to carry weapons on military facilities last year.

In his announcement, Texas Governor Greg Abbott observed that "it has become clear that our military personnel must have the ability to defend themselves against these type of attacks on our own soil." Texas was the site of another deadly terrorist attack on our service members at Fort Hood in 2009.

According to NBC News, Sen. Ron Johnson, a Republican who represents Wisconsin and is chairman of the Senate Homeland Security and Governmental Affairs Committee, says he will introduce legislation "calling for the termination of regulations that prohibit members of the Armed Forces from carrying certain firearms on military installations."

"By disarming the Armed Forces, gun-free policies at military facilities have made our men and women in uniform easy targets for terrorist attacks," Johnson said.

Here in Ohio, Senators Joe Uecker (R) and Randy Gardner (R) have introduced SB 199, which aims to allow military members the ability to carry firearms for their defense and security. House legislation is also expected to be introduced this week.

Senator Uecker told Buckeye Firearms Association "Service men and women fight each day to protect our freedoms. These are our sons and daughters, brothers and sisters, moms and dads. They are constantly on high alert at home and abroad to looming terrorist threats. We need to protect our military members as they have so bravely protected us."

Senator Gardner told Buckeye Firearms Association “We trust members of the armed forces to protect us overseas. It only makes sense that we give them greater opportunity to protect themselves and their families when they are back home.”

We offer thoughts and prayers to the murdered, and to their friends and families left to carry on. Buckeye State residents are especially touched by the loss of one of our own - U.S. Navy Petty Officer 2nd Class Randall Smith of Paulding Co., OH.

Disarming our military members has had the most severe unintended consequences. We thank the legislators in the Statehouse, the various governors and officials in Washington D.C. who seek to right this wrong. It is unconscionable that the very men and women who carry arms to protect our nation in foreign lands are denied the basic right of self defense on American soil.

Our service members and combat-tested veterans are trusted around the world to bring piece to war torn areas. They must be trusted with firearms here too, so that others cannot wage war on them on their bases, recruiting centers or anywhere else.