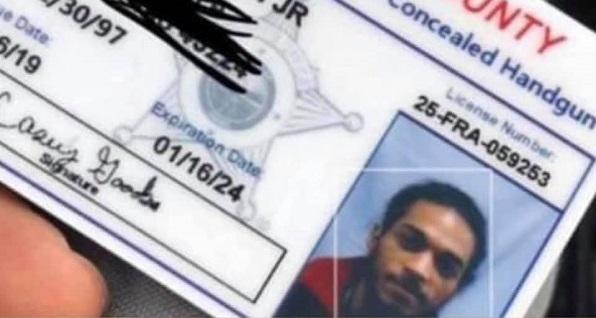 I believe Ohio's Second Amendment community should demand them as well.

Family members and activists say that Casey Christopher Goodson Jr., 23, was carrying a Subway sandwich and was on his way back from the dentist's office when he was fatally shot in the back three times by a Franklin County Sheriff's office SWAT deputy who is assigned to a U.S. Marshal's office fugitive task force.

Family friend Heather Johnson, 32, spoke early Sunday afternoon with The Dispatch about Goodson, on behalf of his family.

"Casey was 23 years old, he never had any type of crimes. He was good, he worked at the Gap, he loved his family," said Johnson, of the North Side. "He just enjoyed being a big brother and enjoyed being with his family, he loved them very much."

According to Peter Tobin, the U.S. Marshal for the Southern District of Ohio, a fugitive task force that included marshals and Franklin County Sheriff's office SWAT members had just finished an unsuccessful search for a suspect early Friday afternoon when Goodson drove by, reportedly waving a handgun at a sheriff's SWAT deputy.

Tobin said the SWAT deputy went to confront the man about waving the handgun. The man was already out of his vehicle outside of a residence in the 3900 block of Estates Place and was told to drop his gun, a command heard by at least one witness, Tobin said.

When the man with the gun did not drop his weapon, Tobin said, the deputy shot him. The man, who was not the target of the original fugitive raid, was transported to OhioHealth Riverside Methodist Hospital, where he later died.

A handgun was recovered, Tobin said, but he did not say from where.

Tobin said he believes the shooting was justified, but added that the Columbus police Critical Incident Response Team (CIRT) will conduct an investigation that will be reviewed by the Franklin County prosecutor's office. The matter also will be presented to a county grand jury for consideration.

Speaking through their attorney, Goodwin's family members dispute this account of events:

Casey was shot and killed as he unlocked his door and entered his home. His death was witnessed by his 72-year-old Grandmother and two toddlers who were near the door. Casey was coming home from a dentist appointment that day. As Casey lie on the ground dying, the unopened Subway sandwiches that he brought for himself and his family sat next to him in a pool of blood. Even hours after his death, the keys that he used to let himself in the house as he was shot and killed hung in the door – a reminder to his family of how close he was to safety.

Casey is not alleged to have committed any crimes, has no criminal background, and was not the target of any investigation. Casey was licensed to carry a concealed weapon and Ohio does not prohibit the open carrying of firearms. It is troubling that authorities have already stated that they believe the shooting to be justified, prior to any investigation taking place and before any information has been released to the family. At this point, witness testimony and physical evidence raise serious concerns about why Casey was even confronted, let alone why he was shot dead while entering his own home.

"They are lying! My brother literally walked across the yard, walked into the back fence to get to the side door, had his subway [sandwich] and mask in one hand keys in the other, UNLOCKED AND OPENED THE DOOR and stepped in the house before" he was shot, Harper wrote.

"He was very safe and respectful when it came to guns, he was a licensed gun holder," he said. "That allegation does not line up with who Casey was, just because of the level of gun safety he tried to maintain."

Most will agree that it is best to withhold judgment until all the facts come in. But I hope that all concealed handgun license-holders will agree that this situation is very concerning.

First, let me say that I agree with the family's attorney in this: no law enforcement spokesperson should be saying the shooting was justified before an investigation has been done. Such statements cause a lack of trust for family members and others as to whether a fair and impartial weighing of the facts will be done at all.

Cause for additional concern is the fact that the Ohio Bureau of Criminal Investigation declined a request by Columbus police on Monday to lead the investigation and questioned the decision to wait three days before requesting help:

Steve Irwin, press secretary with the Ohio Attorney General's Office, said in a statement, "Not knowing all the reasons as to why so much time has passed before the case was referred to BCI, we cannot accept this case."

Irwin said usually when the agency is called to assist, it happens sooner so agents can be on the scene to document any evidence.

"Three days later after the crime scene has been dismantled and the witness have all dispersed does not work.”

What's more, any hope that body camera footage could help to clear up discrepancies between these accounts is dashed by the fact that the Franklin Co. sheriff's office does not have body cameras. In the age we live in, and considering the frail relationship between law enforcement and the black community in particular, a law enforcement entity's decision not to employ body camera technology is a problem waiting to happen.

As I read this article, my mind immediately returned to an August incident involving Darren Cooper, a black Ohio CHL-holder who, while sitting in his car eating his breakfast and talking on this phone at 8:47 in the morning, found himself surrounded by Ravenna, OH police officers.

Reports say at least two of the officers had their guns unholstered. One officer had his AR-15 at the ready. The reason? A woman in a dentist office across the street called 911 and reported a man sitting in his car waving a "pistol" around, acting "erratically."

Police searched his car and found nothing. As I wrote at the time and as I thought again as I read about Goodson's death, I am forced to wonder how different Cooper's situation might have turned out if he had been carrying that day.

Incidents like Goodson's and Cooper's cause me, as a white person, to wonder - what would it be like if, instead of being seen by most officers as one of the "good guys" when they learned I was carrying, I was instead immediately seen as a threat? What would it be like if my family literally feared for my life if I was carrying (or even if I was unarmed) and got pulled over on a run to the pharmacy or grocery because I "fit the description?" Would this change my decision to exercise my Second Amendment right to bear arms?

In the wake of accounts like these, I have begun to ask more questions of my black friends about their experiences with law enforcement. I recently wrote about what I am learning, and gave suggestions as to what we all can do about it, here.

For those who may be interested, Goodson's family is organizing what they want to be peaceful rally at the Ohio Statehouse on Saturday, December 12 at 12:00p.m.