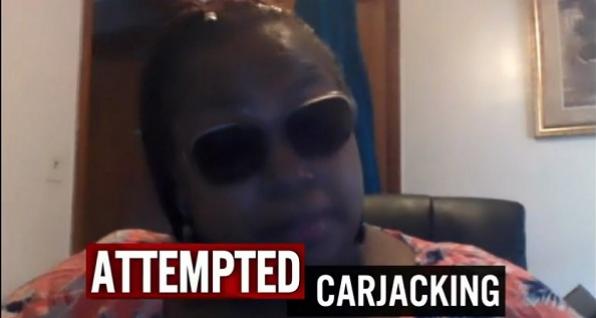 Cleveland Lyft driver punched, choked, threatened with a knife, then fired for fighting back

A Cleveland Lyft driver found herself in a dangerous situation recently when two young men who she picked up began attacking her.

Cynthia Norman said she picked up a pair of young men — likely in their 20s — at an apartment complex in Cleveland’s Nottingham neighborhood around 1:00 a.m. Sunday.

As she arrived at the destination, the NEO Sports Plant, formerly known as the Euclid Sports Plant, she became concerned as it appeared the facility was closed.

That’s when the ride turned violent.

“I had to fight with these two men. I had one choking me from the back,” Norman told 19 News.

Norman said the other passenger, breaking Lyft’s COVID-19 protocol, insisted on sitting in the front seat.

She said he started punching her in the face as the man in the backseat choked her.

Cynthia told WOIO one of the men was armed with a knife, and that all she could think about was "Am I going to walk away from this dead or alive?...They didn't know I was going to fight back."

Norman told 19 News she then grabbed her gun from the center console and started shooting.

The two men fled on foot, leaving behind the cell phone they stole from her.

It’s unclear if they were wounded.

Norman drove to the 5th district police station and reported the incident.

According to a police report obtained by 19 News, the men are facing attempted kidnapping and attempted aggravated robbery charges - but no arrests have yet been made.

To make matters all the worse for Cynthia, she is now being victimized a second time - having been fired by Lyft for having exercised her right to defend herself.

Norman is frustrated that her supplemental income has been taken away by Lyft, which has a zero-tolerance policy for drivers carrying weapons -- even if they’re legally carried.

“What if you’re getting attacked? What are you supposed to do then?” she wondered.

Despite the fact that Cynthia is not facing any charges, a spokesperson for Lyft told 19 News the company stands by its decision.

This incident is a perfect example of why Ohio's self-defense law needed to be reformed, as was just accomplished via passage of SB 175 (Remove Duty to Retreat).

Under Ohio's Castle Doctrine law, passed in 2008, if someone unlawfully enters or attempts to enter a citizen's lawfully occupied home, or theirs or an immediate family member's occupied car, citizens have an initial presumption that they may act in self defense, and will not be second-guessed by the State. But Norman was driving a rental vehicle. In 2012, a man sought to claim self-defense under Ohio's Castle Doctrine law after using his gun to threaten a man who tried to enter his girlfriend's vehicle. His efforts failed.

When SB 175 becomes law on April 6, future Cynthia Normans are not going to have to be second-guessed about whether or not they had some "duty to retreat" from a violent encounter such as this one, so long as they are in ANY place in which the person lawfully has a right to be.