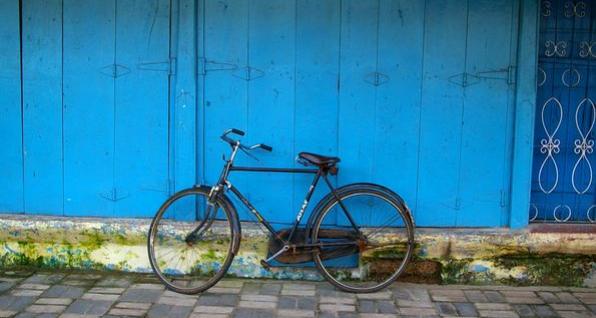 Criminal Mindset: “I Saw an Opportunity and I Took It.”

A couple weeks ago we got a call about a stolen bicycle. A college-aged female rode her bike to a local drug store and went inside. She didn’t lock up the bike. When she came out a couple minutes later, the bike was gone.

Fortunately, several witnesses saw the theft and got a good description of the suspect. I found him and arrested him (still riding the stolen bike) about 20 minutes later.

In the grand scheme of things, not a big deal. A theft. An arrest. It happens every day.

While I was speaking with my prisoner during the arrest process, I recognized that most of you will never be in such a position to talk candidly with a thief (who also had past arrests for felonious assault, kidnapping, rape, and a host of other crimes). Since I get this “honor” quite regularly, I’m happy to share what I learn with you all.

Our thief today is homeless. He’s 32 years old and overweight. He’s a regular consumer of crack cocaine. He has no job and no place to live. He sometimes stays at friends’ apartments, but his permanent address is a local homeless shelter. The sum total of his possessions consisted of a change of clothes, a broken phone, and less than $4 cash.

When I asked the man why he stole the bike, his comment was enlightening:

“I took it because I have the chance to stay at my friend’s place tonight instead of the shelter. My friend lives in (the next town over) and it would be about a four hour walk to get there. It rained all day yesterday and it looks like it’s going to rain some more today. I just didn’t want to spend four hours walking in the fucking rain and getting soaking wet again. I figured a bike would be faster.”

He continued by saying: “I knew it was wrong to steal the bike, but I just don’t care. I didn’t want to get wet no more. I saw an opportunity and I took it. I’d do the same thing all over again if I got the chance. Biking is just faster than walking.”

The guy wasn’t rude or trying to play the role of a badass. He was just describing the daily realities for someone who lives in a world very different from the one in which you and I reside.

He wasn’t mentally ill. He knew right from wrong. But he had absolutely no remorse about taking a bike from some girl who probably needs it as just badly as he did. The thought of what the victim would experience didn’t even register in his mind. He “saw an opportunity” and took it. He took a college girl’s only means of transportation, because he didn’t want to be inconvenienced by a long walk.

This is what most folks don’t understand about serious criminals. The fact that the victim of the crime would be affected in a negative manner is not even an afterthought. Your feelings and concerns mean absolutely NOTHING to the criminal. He doesn’t care if you live or die, let alone how “inconvenienced” you will be if he takes all of your stuff or beats you within an inch of your life. If you literally had ZERO concern about the well being of your neighbors and fellow humans, what kind of atrocities would you be capable of committing? That’s something that few people consider.

Unfortunately, the majority of the hard core criminals I encounter feel the same way. You are literally nothing more than an obstacle they must overcome to achieve their goal. Most of the serious criminals out there think you and I are merely pawns on the chessboard of life. They will destroy everything you know and love if it means that they will benefit in the wake of the destruction. You are completely expendable in their eyes.

Recognize that. Recognize also that we aren’t going to be able to “fix” many of these criminals. They are out there among us every day and can’t be avoided.

One of the only things you and I can do is to reduce the “opportunities” for people like this to act on their urges. The criminal is going to commit crimes. The only thing we can do is to harden ourselves and take actions to ensure that the WE aren’t targeted. You can’t stop people like this because they don’t operate with the same mental processes that you have. They don’t have a care in the world if they hurt, kill, or inconvenience you. If it will help them get what they want, they’ll do it. That is a crucial concept that most “good” people can’t comprehend.

Harden the targets. Make it tough for the criminals and they will more often than not move past you to find an easier victim. As sad as it seems, that’s truly your best hope. The only way you can win this game is by not playing. Remove the criminal’s “opportunities” and you will have a minuscule chance of being victimized. Career criminals don’t like hard work. If you make it hard on them, you will be deselected from their victim pool.

Think about what “opportunities” you might be inadvertently creating for the potential criminals you encounter. Do the work. Remove the “opportunity” from the equation and your chance of being a crime victim drops into the “slim to none” territory.

There are people like my prisoner all around you every single day. If you don’t understand how they think, your name might soon be filling the “victim” box on my next police report.