#Don'tDigTheRig (Of XDs and Sticky Holsters)

Concealed Nation has a regular feature on its website called #DIGTHERIG. It consists of reader submitted photos about their individual chosen concealed carry weapon and holster choices.

A huge variety of guns and holsters are featured. All are carried by someone. Unfortunately, some of the choices are less than optimal. Concealed Nation doesn’t provide any commentary about whether the CCW choices are good or bad. I fear that leads a lot of uneducated readers to think they are making good choices with regards to CCW weapons just because they are carrying a gun that is similar to one of the guns featured on the website. That’s not a good idea.

While most of the gun/holster combinations featured are completely adequate, some are less than ideal. When I see some of these sub-optimal choices, I will highlight them here, telling my readers why I think that they should be making better choices. I’m going to call my series #DON’TDIGTHERIG.

This installment takes a look at Joe and his Sticky Holsters. 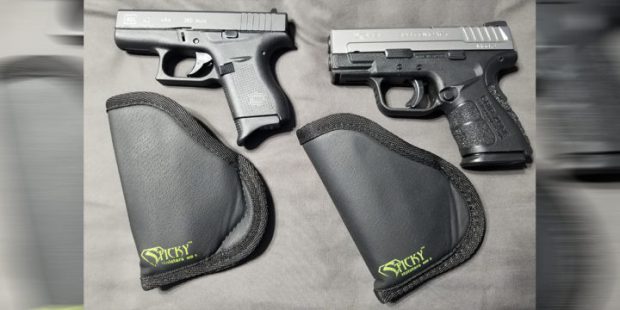 I don’t have any issue with the Glock 42. It’s a quality gun and I occasionally carry one myself. It’s an exceptionally good choice for anyone who is extremely sensitive to recoil. It’s a very pleasant and accurate gun to shoot.

I’ve written about the Springfield XD pistols before. I don’t care for them. Some of them are very accurate. Most are gentle shooting and have decent triggers. The problem is that they malfunction more often than comparable sized pistols from Glock, Smith and Wesson, Sig, and Walther. Parts break more often as well.

The gun’s main selling point seems to be “it’s not a Glock.” Most people who initially buy them just don’t like Glocks for whatever reason. They want something with Glock-like performance without Gaston’s name written on the slide. It’s a bad choice. The XD isn’t as good as the Glock (or several other different subcompact pistols).

Other folks attracted to the XD like the grip safety. This crowd is often the new CCW carrier who doesn’t yet feel comfortable carrying with a loaded chamber. They like that the grip safety provides an additional element of security for carry. If you don’t feel comfortable carrying with a loaded chamber, you need more training, not a gun that makes shooting more difficult.

In my classes, the XD pistols are not horrible performers, but they do malfunction at a rate higher than I see with comparable Glock or S&W pistols. The magazines seem to be a big issue. I’ve seen more weakened springs and bent feed lips than in other manufacturers’ products. Beyond that, the grip safety creates some issues with shooters who have small or weak hands. A problem occurs when students have a suboptimal grip and don’t fully depress the grip safety. Since the grip safety must be depressed in order to rack the slide in some versions, they can’t properly charge their pistols or perform malfunction clearing drills.

I know a lot of you XD users will say “That’s never happened to me!” My question to you is: have you ever practiced after really fatiguing your grip to simulate a life or death struggle? When is the last time you’ve worked support side one handed malfunction clearances? That’s where I really see a lot of failures. Most casual shooters will never see such a thing because they don’t train hard enough to induce the malfunctions.

What about the Sticky holsters? I don’t care for them either. They are marketed as a dual pocket/inside the waistband holster without any clips, loops, or attachment points. Holsters that try to do too many things always end up doing none of them well.

The holsters have a “sticky” outer finish that is supposed to hold the holster in place when carried inside the waistband. They actually work OK as a pocket holster, but fail as a quality IWB rig. They simply don’t stay in place during extreme physical movement.

I’ve had a couple students try to use the sticky holster during some extreme close quarters shooting and groundfighting classes I’ve taught. Guns were constantly falling out as the students fought and rolled. If the gun did manage to stay inside the pants, the holster moved significantly and didn’t create a consistent drawstroke. If you carry an IWB holster you want it FIRMLY attached to the belt so that it doesn’t move around. There’s a reason that every other IWB holster has a clip or loop belt attachment. You also want the holster to be molded with enough retention to retain the gun if you have to run or fight.

The Sticky holster doesn’t meet those criteria when carried inside the waistband. If you have one, use it for pocket carry only.

Joe also mentions that he uses the Sticky holster to carry the gun in a car:

This is another bad plan. You car is not a holster. Carry the gun on your person. If you are attacked in the vehicle, you may have to bail out quickly. You may not have enough time to grab the pistol holstered between the seats. Some vehicle attacks involve crashes. Either the criminal intentionally crashes into your car or you attempt to run over the criminal. A gun between the seats isn’t likely to stay there after a high impact crash. You don’t want to be digging around under your car seat looking for your pistol after a carjacker rams your vehicle.

Again, carry the gun on your person, not in your car. Carry it in a real inside the waistband holster with sturdy molding and a secure attachment to your belt. Ditch the Sticky holsters.

Equipment isn’t the most important factor in winning your defensive encounter. With that said, you don’t want to intentionally diminish your performance by using bad gear. It’s hard enough to win a gunfight when everything goes well. It’s a lot harder when you have sub optimal equipment.