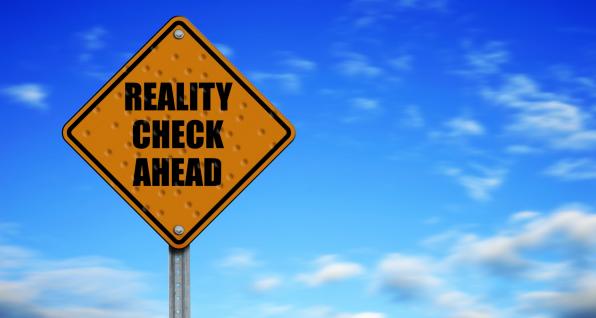 A Failure to Acknowledge Reality

I took a call a couple of weeks ago at work. A woman was reporting that she had been “attacked” by an aggressive dog several times over the last year. As I talked to her to find out what happened, I learned that a neighbor’s dog regularly barks at her as she walks past the neighbor’s house. The dog is restrained by an “invisible fence” and does not leave its yard. The woman told me “Every time I walk past that house, the dog barks aggressively and runs straight at me. It scares me to death.”

After ascertaining that the dog has never bitten her, never left its own yard, and is merely acting territorial and barking, I informed the caller that the dog’s owner had not violated any laws and that as a police officer, I couldn’t do anything about the situation. I made the very simple suggestion that if this dog scares her so badly, maybe she should walk on the other side of the road when she goes past the dog’s yard. It seemed like a reasonable course of action to me. The dog doesn’t get territorial and charge, she doesn’t get scared. The woman was irate that I suggested such a thing.

“I shouldn’t have to adjust my walking path to accommodate my neighbor’s dog! I pay taxes in this community! This is my neighborhood! I should be able to walk wherever I want!”

Of course she was right. But being right doesn’t always protect you from negative consequences. The woman was failing to acknowledge reality. The reality is that she knows the dog will bark at her when she walks past the house. She knows there is nothing I can do about that. Yet she persists in repeatedly taking the same course of action even though she knows that she will be scared by the dog again and again. That isn’t a smart way to live your life.

To illustrate my point, I asked the woman another question:

“Do you lock the doors on your house when you go to work?”

She replied: “Of course!”

“Well, you shouldn’t HAVE to lock your doors. It’s your house and no one should try to steal from you. You have every right to leave your doors unlocked, yet in this case you acknowledge reality and take basic precautions because the world is not the way you want it to be. The world is the way it is. You may not like it, but you have to deal with it. Walking on the other side of the road to avoid an aggressive dog is the same thing as locking your doors when you leave the house. It’s accepting the reality of the situation."

I should have known better. Instead of understanding the logical inconsistency in her thought process, she began to berate me for pointing it out. She was upset that I wouldn’t arrest the homeowner thereby ensuring that she could walk past his house any time she wanted without being scared by a barking dog. She told me that she REFUSED to alter her life to accommodate the actions of an aggressive dog and quickly ushered me out of her house.

“I shouldn’t have to remove my iPod earbuds when I’m jogging in a dangerous area. I’m entitled to listen to music when I work out…..”

“I should be able to leave my laptop computer on the front seat of my car when I go shopping. It’s my property! No one should break in and steal it!…..”

“This is a safe city! I should be able to leave my purse unattended on the restaurant table while I go to the bathroom. I can’t believe someone would steal it!……”

“I should be able to yell obscenities at anyone I choose. Just because I called that guy a mother #$%&^ doesn’t give him the right to hit me……”

You may be right, but if you fail to acknowledge reality, you will still lose. The world is not how it should be. You don’t have to like that. You can work to change it. But if you ignorantly refuse to acknowledge reality you are taking the first step on the path to ensuring that your name will occupy the “victim” box on my next police report.