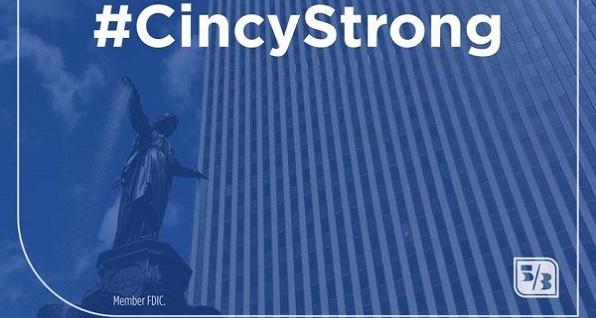 The company's "no-guns" policy, enforced not only at its headquarters but also at all of its branches, did not stop the attack.

The company's security turnstiles did not stop the attack.

The company's unarmed security guards did not stop the attack.

The courts did not stop the attack.

Existing gun control laws did not stop the attack.

What stopped the attack was "good guys" with guns - police officers who responded to the scene.

It is an undebatable fact that the shortest response time saves lives. As such, the way to limit the number of casualties when such an attack occurs is to have armed personnel on scene, ready to respond faster.

Fifth Third's corporate plan involves unarmed security guards, "no-guns" signs, and a long wait for police to bring guns to end the carnage. The results speak for themselves.

Rather than highlight these truths, the media are once again clamoring to blame the Constitution of the United States, blame the so-called lack of adequate gun control laws, and blame millions of law-abiding Americans who safely exercise their right to bear arms each and every day.

"Why did Fifth Third chose to call UNARMED employees 'security'?, or

"Why does Fifth Third disarm law-abiding employees and customers who have their concealed handgun licenses?", or

"Why do Fifth Third decision-makers believe a bank robber, or a determined killer like this one, are going to obey "no-guns" signs?" ,or

"What's "strong" about Americans being helpless and having the police come to save them?" (h/t David Codrea)

They give the killer instant fame by publishing his name, ignoring evidence that perpetrators and plotters look to past attacks both for inspiration and operational details, in hopes of causing even greater carnage.

The Cincinnati Enquirer has declared, "Enough."

ENOUGH with the misplaced blame.

ENOUGH with the celebritiziation of killers.

ENOUGH with the false promises that gun control could prevent these attacks.

In this case, the "no-guns" policies at Fifth Third Bank ensured that it would be far too long.

Victim Zones: We have to move the goal posts

Does YOUR financial institution support your Second Amendment rights?

Fifth Third Bank robbery: not even the guards are armed