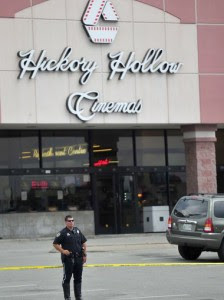 In case you missed it, a deranged suspect attempted to commit mass murder at a Tennessee movie theater [last week]. The suspect initiated his attack in the theater by using pepper spray against several people. As they became disoriented from the effects of the spray, he began hacking at them with an axe. He also had an airsoft pistol and a fake backpack bomb. He was killed by responding officers after he pointed the airsoft gun at them. For more details, check out this article.

Movie theaters seem to be a hotspot for active killers recently. You can read my advice for staying safe at a theater in the article I posted [recently] entitled Surviving a Movie Theater Shooting. Besides those tactics, let’s talk a little bit about defeating pepper spray.

News reports are still sketchy, but it seems like the would be killer in [last week's] attack deployed quite a bit of pepper spray. He was wearing a surgical mask to protect himself and responding officers were seen wearing gas masks. Several people were treated for the pepper spray exposure. Interestingly, the Batman movie theater shooter in Aurora, Colorado initiated his attack with tear gas as well.

Have you thought about how you might fight through the effects of pepper spray if you are attacked in a similar manner?

Pepper spray and tear gas can make life miserable for you if you are sprayed, but there are ways to fight through the effects. I say this as an instructor with pepper spray/tear gas teaching certifications through my state as well as through several different commercial entities. I’ve been sprayed more than 50 times myself in training and on the street. I won’t lie. It sucks, but you can fight through it.

It’s unclear whether [the] attacker used a hand held spray unit or a grenade. If your attacker is using a hand-held pepper spray container, I think the first step to consider is retreating. Most small cans of chemical irritant have a very limited range. The small keychain type sprays only shoot about five feet. The larger canisters that cops carry shoot a stream that is 10-15 feet. Excepting the large fire extinguisher-style cans, you would be out of range of any commonly carried chemical spray if you could get at least 20 feet away. 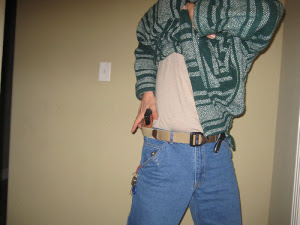 If you can’t escape or shield, recognize that you are going to be sprayed. Know in advance how you will react. You can usually continue fighting, but some people panic when they are hit with the spray for the first time. Their panic leads to a freezing response that makes them unlikely to be able to defend themselves. The spray is painful. It makes you cough and your eyes burn. But most of you can fight through the pain as long as you know what to expect.

You don’t want your first exposure to be on the street while you are fighting a criminal. It would be a great idea if you had someone spray you in a controlled situation first so that you aren’t shocked by the effects when you have to fight it on the street. If you don’t want to take a full spray to the face, squirt some pepper spray onto a gauze pad and wipe the corner of your eye with it. You’ll get a good idea of what the spray feels like and still be able to decontaminate relatively quickly.

A very small percentage of people are allergic to red peppers and will have a serious allergic reaction if exposed to OC spray. If you feel your face and throat swelling, get hives, or have serious difficulty breathing after exposure, seek medical help! That’s another reason I advocate an advance exposure to OC. You don’t want to find out that you have a potentially fatal allergy while you are fighting the bad guy!

If you are still in the fight and decontamination options aren’t available, you’ll have to flush your eyes the natural way, by blinking rapidly. Close your eyes as hard as possible, open them quickly and repeat until the tears start flowing. It will be painful to open your eyes at first and you won’t want to do this, but I promise you’ll decontaminate much more quickly than if you kept your eyes closed.

If the criminal presses the attack after he sprays you, you will have to keep fighting no matter how badly you are exposed. Continue to blink and strobe your eyes as rapidly as possible. If you wear contact lenses, rip them out of your eyes as quickly as possible. The soft lenses absorb the chemical and will both prolong and enhance the eye irritation. Don’t worry about saving the lenses. Once they become soaked in pepper spray, you’ll never be able to wear them again.

If you direct hit in the eyes, you may not even be able to blink or strobe. You may have to physically pry your eyelid open with your non-dominant hand. Prying your eye open with the off hand will provide enough vision that you will be able to find and target your opponent or line up the sights on your weapon.

Having some type of bandanna with which to cover your mouth and nose as you evacuate the area will also be useful. The bandanna isn’t a gas mask, but will certainly filter out some of the gas and prevent it from entering your lungs. As I mentioned in the movie theater shooting article, I carry a triangular bandage as a first aid tool whenever I’m out in public. That same bandage would make a great improvised gas mask as well.

The key thing to remember is that even though your eyes are burning and you have difficulty breathing, you CAN still fight through a chemical irritant exposure. Calm down. Control your breathing. Blink and strobe your eyes. If necessary, physically pry an eyelid open so that you can see. Solve the problem and get yourself to safety.