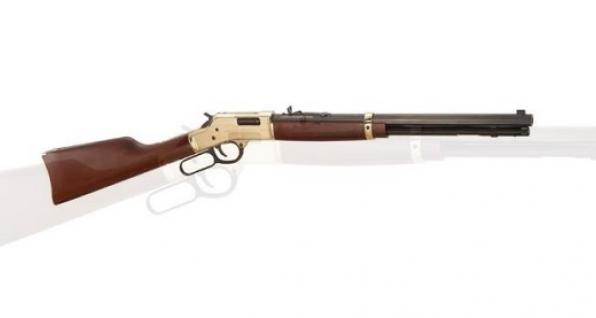 The Henry Repeating Arms Company has been around since 1996 and is probably best known for their brass-framed .22-caliber lever-action rifles. More recently they have expanded their offerings beyond just lever-action rifles to include centerfire cartridges, and rifles made of carbon steel and stainless steel. In 2015-2016, Henry brought out their Big Boy lever-action rifles and chambered them for pistol-caliber cartridges like the .357 Magnum/.38 Special, .41 Magnum, .44 Magnum/.44 Special, and .45 Colt. In 2017, they added the .327 Federal Magnum/.32 H&R Magnum chambering to their line-up.

I have been intrigued by the .327 Federal Magnum cartridge since it was introduced in 2007-2008 as a joint development effort between Federal Cartridge Corporation and the Sturm, Ruger Corporation. It was made by lengthening the .32 H&R Magnum cartridge (introduced in 1984), which itself was a lengthened .32 S&W Long cartridge (introduced in 1896), and earlier .32 S&W cartridge (introduced in 1878). It was initially chambered in Ruger’s 3-inch SP-101 double-action revolver, a competitor of S&W’s small J-frame revolver. Ruger’s idea was to be able to offer a cartridge that approached the .357 Magnum in velocity and muzzle energy but, because it was smaller in diameter, six rounds could be accommodated in the cylinder instead of just five. Depending on bullet weight, muzzle velocities of the cartridge range from about 1,300 fps to almost 1,650 fps with muzzle energies in the 430 to 640 ft-lb. range, measured from the 3-inch SP-101 and 51⁄2-inch Ruger Blackhawk revolvers.

I got a Ruger SP-101 in .327 Federal in 2009 and was impressed with how accurate the cartridge was when fired out of the gun’s short barrel. Since then I’ve thought it would be an excellent small game cartridge chambered in a rifle—specifically in a Ruger bolt-action rifle like their 77/357. Alas, Ruger has not seen fit to do this. However, Marlin did chamber it in one of their lever-action rifles targeted at the cowboy action shooting community. It never caught on because the gun in that caliber was not as reliable as cowboy action shooters demanded, so Marlin stopped offering it.

The American-made Henry rifles have a well-deserved reputation for reliability, outstanding customer service, and they have a life-time guarantee. Despite this, they have never interested me that much because their design is different from the traditional lever-action designs of the 19th Century in that they lack a loading gate to insert cartridges through. Instead cartridges are loaded into the guns by twisting the endcap on the under-barrel tubular magazine and withdrawing a long inner magazine tube that includes a spring and plunger. Cartridges are then placed into the tubular magazine through an opening on the underside near the muzzle end and the inner tube is reinserted. (Very recently, Henry has introduced a model of their lever-action rifle that includes a traditional loading gate.) However, my interest in Henry rifles changed when I noticed one chambered in .327 Federal/.32 H&R Magnum with a steel frame at a local gun shop.

I asked the salesman if I could see it. The rifle felt well-made and the action was smooth. The price on the tag was just under $760, but the salesman said they could do better than that. I asked how much less so he went to confer with the owner. When he came back, he said I could have it for $685 - about 10% off - so I decided to get it. (I suspect the shop had the gun in their inventory for some time since mine left the factory in August 2017, and that is why I got a deal on it two years later.) Henry lists the MSRP for this rifle at $893. It is also available with a brass-frame for an MSRP of $945.

Other variations include ones with carbine-length barrels (161⁄2 inches) and ones with octagonal barrels. My Henry Big Boy has a 20-inch round steel barrel, steel frame, a straight American Walnut stock with checkering on the fore-end and on the pistol grip area, a thick rubber recoil pad, sling swivel studs, a steel fore-end cap and buttplate. The sights consist of an adjustable buckhorn rear sight and a brass-bead front sight on a post. The receiver is drilled and tapped so a scope can be mounted. The gun’s overall length is 37.5-inches, weighs 7 lbs. (the ones with brass frames are heavier), and has a transfer bar safety. Magazine capacity is listed as 10 rounds in .327 Federal, but I was able to get 11 rounds into the rifle’s magazine without any problem. (I was also able to fit 12 of the .32 H&R Magnum cartridges into the tubular magazine.)

A few days after getting it, I had a chance to fire a few rounds during an impromptu session at a friend’s shooting range. I did my initial shooting at about 20 yards from a kneeling position. My rounds seemed to be hitting the target 3-4 inches low and about 4-5 inches to the right of my point of aim, so I decided that I needed to adjust the sights before I shot it anymore. (A few friends at the range that day did want to try it, so I let them after telling them that it was shooting low and to the right.)

It was another couple of days before I got a chance to take it to my local gun club range where I could shoot it off a rest — my MTM Case-Gard pistol rest — and see where the bullets were hitting compared to my point of aim at 25 yards. The accompanying photo shows the results. 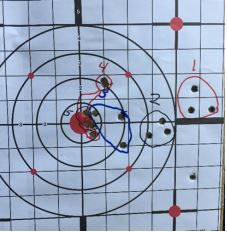 Of my first three shots, only one hit the target a little over 41⁄2 inches right and 21⁄2 inches low. These three shots were fired using some .327 Federal reloads that I had so I decided to switch to factory loads — 100 gr Federal American Eagle Jacketed Soft Points. These have an advertised muzzle velocity of 1,500 fps and a muzzle energy of 500 ft-lbs., but I suspect both are considerably higher coming out of the 20-inch barrel on my Henry Big Boy. This time my hits were about 1-inch high, but still about 41⁄2 inches to the right of my point of aim (see the group labeled “1” in the accompanying photo).

Before shooting again, I decided to raise the rear sight up one notch in the ramp and to drift-adjust the sight to the left. (I forgot to bring a hammer and punch with me, but I had another tool in my shooting bag that I could use as a punch and a block of 4x4 wood that was on the shooting table at the range that I could use as a hammer — “Buckshot” would be so proud of me!) I gave it a couple of taps and fired another three shots. This time my group was about at the right elevation, but 3 inches to the right (see the group labeled “2”). Another windage adjustment was made and another three shots fired. Now the group was centered about 11⁄2 inches right (see group “3”).

Yet another windage adjustment resulted in Group “4” being about 3⁄4 inch right, although two rounds were a little high. I attributed that to my poor vision — I could only see my aiming point on the target if I used my regular eyeglasses, and that meant my sights were blurry — so I made another adjustment which resulted in three rounds hitting the right half of the 1-inch bullseye (see group “5). That was about as good as I could expect given the rather crude method needed to make windage adjustments, so I left things right there. The accompanying photo shows how far to the left I had to push the rear sight in it’s dovetail to get my hits in the center of the target. In my experience, this is not unusual for this type of rear sight on a lever-action rifle.

Next I shot some .32 H&R Magnum loads — 95 gr Federal lead semi-wadcutters with an advertised muzzle velocity of 1,020 fps and a muzzle energy of 220 ft-lbs., but again I think they were probably higher coming from my rifle. Since the muzzle velocity was so much lower than it was for the .327 Federals, I expected my bullets would impact the target lower, and they did — by about 4 inches. I had to raise the rear sight up two notches to get my bullets hitting the center of the target, but they were a little high. Since I may well shoot both the .327 Federal and the .32 H&R Magnum in this rifle, just knowing how I need to set the elevation for each is very helpful. (I may decided to use this rifle, along with a couple of Ruger SSM single-action revolvers that I have chambered in .32 H&R Magnum, if I decide to once again participate in cowboy action shooting events.)

The only modification that I’ve made to my Henry Big Boy is to put a leather wrap from Palo Verde Gunworks on the lever to make it easier to manipulate the action quickly. I may install a big loop lever (available from Henry) as my fingers feel a little squeezed with the leather wrap in place.

The Henry Big Boy did not disappoint me at all. The quality of construction appears to be excellent and the action certainly is smooth. Accuracy is very acceptable for a gun of this nature. I did not experience any malfunctions while shooting it. About the only “negative” is the cost of ammunition for it. Since it is not a very popular cartridge, there are not many companies making .327 Federal and as a result they are quite expensive compared to other pistol-caliber cartridges — about $33 per 50 rounds at my local gun shop, with .32 H&R Magnum not being much cheaper. Fortunately, I have the equipment needed to reload both cartridges so that should lower my shooting costs some.

The .327 Federal may be a little small for hunting deer-size game, but it is certainly more than capable of taking coyotes, etc., within about 100 yards. Ballistically, the .327 Federal is on par with the .30 Carbine (which I have used for deer hunting when I was a teenager living in Michigan) and the old .32-20 (.32 WCF) cartridge, which was quite popular in the Old West chambered in Colt single-action revolvers and Winchester lever-action rifles. It can be used in a home defense mode, especially in those jurisdictions that frown on the AR-15 and other semi-automatic-style rifles. The .32 H&R Magnum is a less-capable round, but certainly nothing to be sneezed at and it is a reasonable self-defense cartridge for individuals that might be recoil-sensitive. Out of a rifle, shooting the .32 H&R Magnum produces about the same felt recoil as shooting a .22 Long Rifle cartridge does.

So, I am happy with my decision to get the Henry Big Boy. Maybe now I’ll start competing in cowboy action shooting again since my local gun club does put on monthly matches.