On November 20, the National Fraternal Order of Police (FOP) sent a letter to Roger Goodell, Commissioner of the National Football Leage (NFL), asking him to reconsider the League's ban on concealed carry. 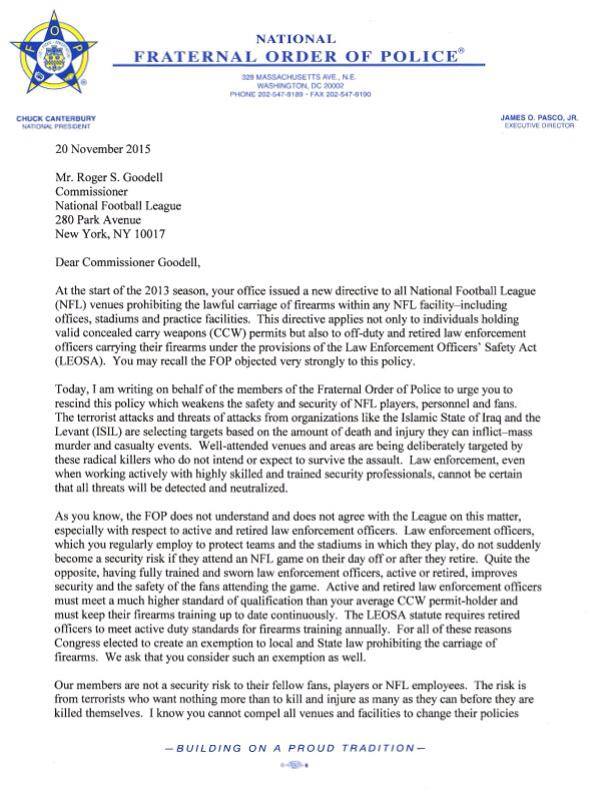 Today, I am writing on behalf of the members of the Fraternal Order of Police to urge you to rescind this policy which weakens the safety and security of NFL players, personnel and fans. The terrorist attacks and threats of attacks from organizations like the Islamic State of Iraq and the Levant (ISIL) are selecting targets based on the amount of death and injury they can inflict - mass murder and casualty events. Well-attended venues and areas are being deliberately targeted by the radical killers who do not intend or expect to survive the assault. Law enforcement, even when working actively with highly trained and skilled security professionals, cannot be certain that all threats will be detected and neutralized.

As you know, the FOP does not understand and does not agree with the League on this matter...

...I know you cannot compel all venues and facilities to change their policies with respect to lawful carriage of firearms, but you can lift the current prohibition, which I strongly urge you to do.

In coverage of this development, Cincinnati's Fox affiliate, WXIX, reports that the Ohio FOP has reached out to the two NFL teams here in the Buckeye State:

"The Ohio FOP has reached out to the owners of the Bengals and the Browns to try and get them to rescind this policy that acts contrary to common sense," said president of the FOP of Ohio Jay McDonald. "Law enforcement officers should be able to help defend themselves and the lives of their fellow citizens in large scale events like an NFL game."

Hamilton County Sheriff Jim Neil, who made news last week in his support for Buckeye Firearms Foundation's FASTER training for school faculty and administrators, told WXIX that he agrees with the proposal to allow all off-duty officers and CHL holders to have weapons inside Paul Brown Stadium.

"A weapon in a trained hand is a deterrent for those who want to do harm," said Neil.

According to WXIX, a representative for the Bengals acknowledged awareness of the letter, but refused comment.