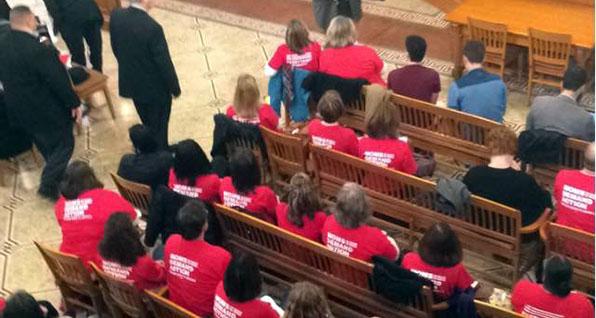 Full Scale War: Bloomberg and Allies Come Out in Force Against H.B. 228

On Tuesday, December 4, 2018, opponents of H.B. 228 packed the hearing room for the Ohio Senate Government Oversight and Reform Committee and in a cacophonous din proclaimed that the Four Horsemen of the Apocalypse will roam free if these bills pass.

This wasn't just the usual collection of hair-on-fire gun bill opponents. This was a well-orchestrated assault bringing together one of the broadest coalitions of anti-gun activists and organizations we've ever seen. And behind it all, the Michael Bloomberg sponsored Everytown for Gun Safety and red-shirted Moms Demand Action.

First, opponents of H.B. 142 came to the podium. This bill would modify the requirement that a concealed handgun licensee notify a law enforcement officer that the licensee is carrying a concealed handgun when stopped. The change would be to replace the confusing wording about notifying "promptly" to simply requiring the licensee to provide the license when asked for a driver's license.

Opponents included Ohioans for Concealed Carry and Ohio Gun Owners, with both organizations saying they preferred no change over this bill, which they believe doesn't go far enough. Maybe, but if we can change the law for the better, why not take the win for the benefit of gun owners? Every pro-gun law ever passed in Ohio has been an incremental improvement. Nothing prevents us from coming back next year to make more changes.

The Fraternal Order of Police and The Ohio Association of Chiefs of Police also testified against the bill on the grounds of "officer safety," though it was not clear how officers are put in any danger by being handed a license rather than having a nervous citizen blurt out "I have a gun!" If anything, current law could very well put law-abiding citizens in danger by forcing them to figure out how to promptly and properly notify an officer.

Then the circus began, with a parade of ill-informed opponents to H.B. 228, many of whom had never read the bill or had any idea of the contents. Wild and reckless predictions filled the hearing room, including escalating racial warfare and skyrocketing murder rates.

In reality, H.B. 228 would make a variety of simple but necessary changes, such as shifting the burden of proof to the prosecution for claims of self defense to bring Ohio into alignment with 49 other states, eliminating the confusing and dangerous "duty to retreat" for victims of violent crime, and removing the absurd requirement to post "no guns" signs in buildings where firearms have been specifically approved.

In all, more than 40 opponents railed against the bill over the course of nearly 5 hours, dragging out the hearing late into the evening, ending at 11:40 p.m. Most of those presenting testimony ignored the actual changes proposed and virtue signalled their dislike for widespread firearm ownership.

Observing from the gallery last night, I can say with certainly that we've entered a new age of gun rights in Ohio. No longer is this merely a debate within our state over what gun laws should be. Now it is full-scale war, lead and funded by outside forces who seek to control our destiny. Bloomberg's Everytown is now pulling the strings and coordinating the attack, from legislation to litigation to grassroots organizing.

Clearly, we need Ohio's 4 million gun owners to step up and do their part as we wage this war. We can't do it alone. Now more than ever, we need YOU to support Buckeye Firearms Association with your donations, membership, and activism.