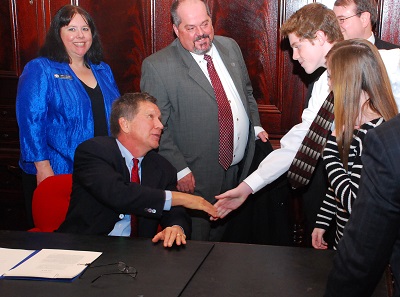 Governor John Kasich signed HB 234 (Allow Noise Suppressors While Hunting) on Friday, December 19. It will become effective on March 23, 2015. A signing ceremony was held at the statehouse to allow the many people involved to witness the signing of this significant piece of legislation.

HB 234 started out as a simple bill to allow the use of suppressors while hunting. Suppressors are legal. Hunting is legal. Essentially the only questions was, “should it be legal to chew gum and walk at the same time?” This bill should have swept through the statehouse quickly, but confusion about what a suppressor does (it’s not a “silencer”) and myths about their use by poachers and assassins (not anywhere near as often as Hollywood portrays) caused delays. There was also confusion about the process of addressing the issue legislatively versus via hunting regulations. As a result, time, money and energy were needed to pass as simple of bill as one could have on firearms.

In any lame duck session, it is common to combine or “Christmas tree” bills by hanging on other provisions in a bill that legislators think will pass. This session was no different. Portions of HB 203 (Concealed Carry & Self-Defense Law Reform), HB 191 (Align Firearms Definitions), SB 338 (Concealed Carry Reform), and HB 454 (Rule Modification for Concealed Carry in School Zones) were amended into a giant substitute bill in the Senate, as it became apparent that only one gun bill was going to reach the Governor’s desk this session. Unfortunately, the HB 454 sections were removed before passage, but some other provisions were picked up.

Representatives Cheryl Grossman (R) and John Becker (R) obviously deserve thanks, as it was their bill that completed the process and will become law. Senator Joe Uecker (R) has also been outstanding to work with as his bill, SB 338 was introduced, fast tracked, delayed, modified, and finally died. His work on his bill allowed for amendments into HB 234 before passage. Senator Uecker is certainly a team player who put in significant effort that resulted in a better final product for gun owners.

Representative Terry Johnson (R) also deserves huge credit for his work on HB 203 - another bill that will not become law, but his work getting his bill through the House with a strong vote under difficult circumstances deserves strong mention. Johnson never quit on his bill, the contents, or the ideals he continually strives for. He has worked three firearms bills though the Ohio House, but only HB 495 became law (last session). It would be easy to overlook Johnson, but that would be a huge mistake. His work on the issues made it possible to amend large sections of HB 203 into HB 234 in the Senate. Johnson is a consummate professional who puts the cause of restoring our Second Amendment rights above himself.

Chairman Bill Coley (R) has had his work cut out for him in the Senate Civil Justice Committee. With many gun bills, extreme emotions, and little time, he packed the most amount of meat he could into one bill and moved it through his committee. While he was not able to bring all groups on board, changes were made at the behest of the NRA, Buckeye Firearms Association, Buckeye State Sheriff Association, Ohio Prosecuting Attorneys Association, American Silencer Association, and numerous legislators. That is a tall task, especially under the time constraints of a lame duck session.

In the end, HB 234 is a fairly complicated 88 page act that is the product of many people’s hard work. We must also thank Speaker Bill Batchelder (R), Senate President Keith Faber (R) and Senator Larry Obhof (R) for their leadership in passing a good bill, and coordinating efforts to bring it all together on time.

As we have done with past large bills, we will cover various aspects of the bill in a series of articles to help gun owners understand the various changes to Ohio law.

Here are the issues addressed in HB234:

Each of these is an improvement to current law for gun owners. While different people will benefit from different sections of the bill, no group of gun owners is being harmed to help out some other group. Some provisions of this bill will take time before the benefit is felt by many people, but in time we expect this bill to benefit most gun owners.

Lastly, we thank all gun owners who took the time to call/write/email their elected officials. A special thanks goes out to those who worked on campaigns for endorsed candidates. Without grassroots support for the work we do, we would not have the success we’ve had.