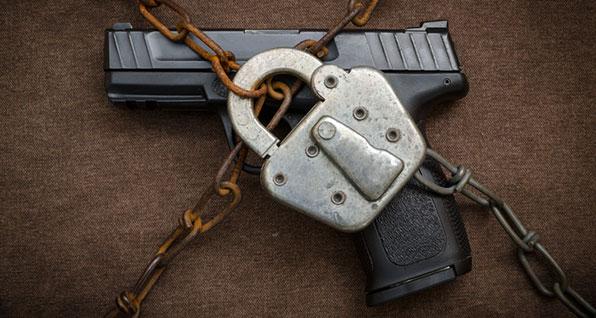 H.R. 127 - The Federal Bill That Seeks to Crush Personal Gun Ownership in America

H.R. 127, sponsored by Shelia Jackson Lee (D-TX) in the 117th Congress is one of the most outrageous and aggressive anti-gun bills ever introduced. While it falls short of banning guns outright and repealing the Second Amendment, it comes very close to doing just that.

The scope and ferocity of this bill cannot be overstated. This is legislation intended to punish law-abiding gun owners and crush personal gun ownership in America.

Note that H.R. 127 is federal legislation, not state legislation. Click here for complete information on this bill, including the text. As of the date of this article, there are no co-sponsors and there have been no hearings or actions taken on this legislation.

This licensing system would be controlled by the U.S. Attorney General and implemented through the Bureau of Alcohol, Tobacco, Firearms and Explosives (ATF).

To get a license to possess a firearm or ammunition, you would need to navigate a maze of governmental red tape and endure extraordinary invasions of privacy.

3. Submit to a psychological evaluation to prove that you are fit to possess a firearm, with standards set by the U.S. Attorney General. The evaluation would be performed by a licensed psychologist who must also be approved by the U.S. Attorney General. At the discretion of the psychologist, the evaluation may extend to other members of your household, and may additionally include interviews of your spouse, former spouse, and at least 2 other family members or associates.

4. Complete a minimum 24-hour "training course" on the use, safety, and storage of firearms, certified by the U.S. Attorney General.

In addition, this license must be renewed each year for the first 5 years and then renewed every 3 years thereafter.

Your license would be denied if you have ever been hospitalized "with a mental illness, disturbance, or diagnosis (including depression, homicidal ideation, suicidal ideation, attempted suicide, or addiction to a controlled substance ... or a brain disease (including dementia or Alzheimer’s)" or "on account of conduct that endangers self or others."

The U.S. Attorney General may also deny your license if the psychologist performing your evaluation determines that you have "a chronic mental illness or disturbance, or a brain disease," are "addicted to a controlled substance ... or alcohol," or have "attempted to commit suicide," or "prior psychological treatment or evaluation" indicates that you have "engaged in conduct that posed a danger to self or others."

Given how difficult it is to define addiction and given that nearly half of Americans may qualify for a psychiatric diagnosis at some point, the bar is low for denial of licenses.

Like the licensing system, the registration system would be controlled by the U.S. Attorney General and implemented through the ATF. It would include every firearm in the United States.

For every firearm you possess or purchase, you would be required to submit to the ATF the make, model, and serial number; your identity; date acquired; location of its storage; and the identity of anyone to whom you loan the firearm and for what time period.

The resulting database and all the information in it would be accessible to the public, law enforcement, all branches of the armed forces, and all state and local governments.

Other than the $800 annual fee for firearm liability insurance, H.R. 127 remains silent on the cost to gun owners. However, we know all the other parts of this new licensing and registration scheme will impose fees as well.

What would all this add up to? No one knows. But let's take an educated guess. We'll be generous and assume that the fee for the license and background check will be just $50 and the psychological evaluation would be a mere $100. Let's further assume that private trainers will be generous and charge just $300 for 24 hours (3 days) of training. This totals $1,250 the first year just for the basic license to possess a gun.

To renew this license, you would have to pay all these fees again, except that the training would drop to 8 hours, so we'll say $100 for that. That brings the total annual fee to $1,050 for years 2 through 5.

In this scenario, the grand total for the first 5 years of legal gun ownership would add up to $5,450. And this doesn't include the cost of a gun, ammunition, or any related fees for a concealed handgun class, holster, or other costs. Of course, if you choose to display an antique firearm or own a modern rifle, you would pony up more cash for those additional licenses.

And remember, we're being generous with these assumed costs. They would almost certainly be higher.

In addition to it being unlawful for you to possess a gun without a license or without registering it with the federal government, there are other restrictions.

It would be unlawful for you to sell, give, or loan a firearm or ammunition to another person unless the U.S. Attorney General is notified of the sale or gift.

It would be unlawful for you to transfer a firearm or ammunition to an unlicensed person.

It would be unlawful for you to transfer a firearm to an individual who is not 18 years of age.

It would be unlawful for you to possess ammunition that is .50 caliber or greater.

It would be unlawful to possess large capacity magazines, meaning any ammunition feeding devise that can hold more than 10 rounds, with the exception of .22 rimfire in an attached tubular device.

And what are the consequences for violating these new laws? H.R. 127 imposes staggering fines anywhere up to $150,000 and prison sentences up to 40 years. It is literally possible for you to spend more time in prison for violating one of these gun regulations than for murder.

So what are we to make of this breathtaking bill? Is it likely to pass?

Given that we're now living under a Democrat federal administration with the advantage of a Democrat-controlled House of Representatives and an evenly split Senate where a Democrat Vice President could cast the deciding vote, it would be foolish to rule out passage of this bill.

However, let's not panic. As stated at the beginning of this article, there are no co-sponsors yet, a sign that there is currently no support for the bill. Also given that mid-term elections are coming up in 2022, Democrats are unlikely to risk losing seats in the House or Senate by passing such an aggressive gun control bill two years into President Biden's term.

But it's worth watching closely because if there's one thing we know, all it takes is one act of violence to create public outrage and a thirst to blame and punish law-abiding gun owners for a crime they didn't commit.

This bill also raises some serious and frightening questions:

Do we really want one person, the U.S. Attorney General, a political appointee, to have nearly total control over all the firearms in the country?

Do we actually want this one political appointee to mandate the contents of firearm training, set the standards for psychological testing, and personally approve the psychologists to do this testing?

Are we not at all concerned about the massive risk of abuse from consolidating so much power in the hands of one political appointee?

Do we trust hand-selected psychologists to be fair in their evaluations given the hostility toward guns in the medical community?

Do we trust one agency, the ATF, to administer and enforce such a sweeping licensing and firearm registration system?

Is it even legal for the U.S. Attorney General to both mandate and sell firearms liability insurance?

What is the rationale for giving the general public access to a database for the exact location of every firearm in the country?

What sort of risk would citizens face if criminals could use the database to target homes with firearms?

What is the reason for giving the U.S. armed forces and all state and local governments access to this database?

Why would we set up a system where only the rich could afford to comply with the law and own guns while the poor would be forced to choose between remaining defenseless or breaking the law?

Why would we impose such harsh penalties that would invariably impact minorities and at-risk communities at a higher rate?

What precedent would such laws set for checks and balances in the U.S. and how would it affect our notion of liberty and individual rights?

My guess is that these and other questions never occurred to Shelia Jackson Lee and would not concern her if they were pointed out. H.R. 127 is less a serious effort to reduce crime than it is a kick in the teeth for gun owners and their civil rights. And most likely, it's a way for Lee, who claims to be a civil-rights champion, to grandstand and virtue signal with no regard for the legal and financial fallout it would rain on millions of law-abiding citizens.