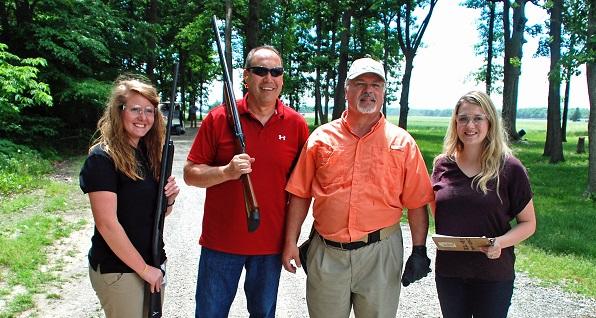 Shooters dodged the predicted thunderstorms to complete the fifty-bird sporting clays shoot of the Ohio Legislative Sportsmen's Caucus. Many shooters agreed that the windy conditions preceding the storm resulted in a few extra missed targets. The wind certainly made many of the targets jump and dance just as I pulled the trigger. The shoot was once again held at the Cardinal Center Sporting Clays clubhouse and course. The Cardinal Center is a premier shooting sports complex located outside Marengo in Morrow County.

John Culclasure, the Congressional Sportsmen Caucus Appalachian State Manager, welcomed everyone to the event. He noted, "There is a good turnout despite the concern about the potential thunderstorms. Overall, a good turnout for the event with the legislators, ODNR personnel and other state partners. It is an excellent opportunity to get folks together to build relationships. It is wonderful to celebrate our sporting heritage and conservation contributions of the sportsmen and women of Ohio"

After those opening remarks and a safety briefing by Cardinal Center staff, the shooters headed to the golf carts and the sporting clays course. There are two course available at Cardinal. Both are laid out along fields, meadows and through wooded setting providing a great outdoor shooting experience. Shots range from close to farther distances, incoming, crossing and outgoing targets present the shooters with ample variety and challenges. Cardinal Center staff explained the operation of the equipment and ensured the water jugs were full on the hot humid afternoon.

There were several new or less experienced sporting clays shooters in attendance and they were paired with experienced shooters for mentoring along the way. I had the pleasure of being in a squad with ODNR Legislative Aide Katie Hegarty and Senator Joe Uecker's aide Lindsay Hendricks. Both were new to the shooting sports with Hegarty explaining that fishing is her passion. Sporting clays is harder for beginners as the targets change in size, speed and direction of flight with each station. However, the ladies did break some targets much to the enjoyment of the others in the squad. Such is the camaraderie of the shooting sports.

Senator Joe Uecker (R-Clermont County), who is the co-chair of the Ohio Sportsmen Caucus, addressed the group following the BBQ dinner. The Senator said, "I'm happy to see everyone here today. It's really important to understand and remember what the shooting sports means to us in Ohio. We have a whole lot of constituents in this arena. It does help us to come together. It's a great day for all of us to be together. We are working on various pieces of legislation. There is always Second Amendment legislation. We have a piece of knife and manufacturing legislation right now. We recently passed a sportsmen license package bill that is awaiting final action in the House., That is really important piece of hunting and fishing related legislation. It's better for all Ohioans when we can work together and stay on top of important issues. It's been a pleasure to be with everyone today."

Todd Rathner, of the Knife Rights organization, was attending his first caucus event. He said, "Thank you for allowing us to be a sponsor of this event. We work with the National Legislative Sportsmen Caucus at other events. They do a great job holding events and have a national event with legislators from across the country. It gives everyone an important opportunity to be able to discuss issues."

Ohio Wildlife Council member, Jim Samuels, summed up the day for a lot of shooters saying, "It was great day to shoot especially since we avoided the downpour from the storms. It can't be emphasized enough that we need a good productive relationship with our legislators on both sides of the aisle and in both chambers. Those who support us, like the ones with us today, understand the issues. It is also even more important to work with those legislators who don't have a sporting heritage to bring them to understand what sportsmen are about. We have a lot to do with the health of forests, fields, farmers and wildlife. It is important that we educate them on what it means to have a healthy environment in Ohio.

It is critical for sportsmen to get involved, reach out to the legislatures and communicate with those who don't understand us to promote and protect the rights and freedoms that the sportsmen and women of Ohio enjoy. The sportsmen caucus shoot is one event that promotes cooperation in promoting and preserving our shooting and conservation heritage.

Okey to the People: "This is our house!"
END_OF_DOCUMENT_TOKEN_TO_BE_REPLACED