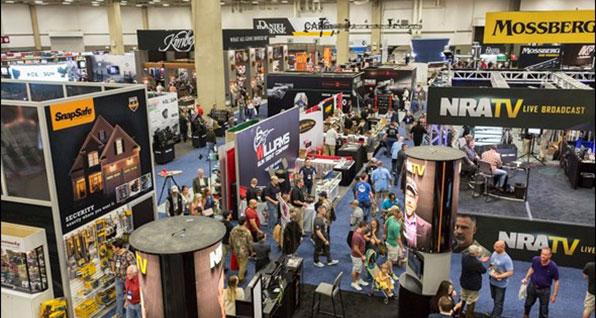 A look back at my first NRA Annual Meetings, and why I keep going back

I first attended the NRA member meetings in 2002. It was in the wake of the 9/11 terrorist attacks. My company was in turmoil and furloughing pilots and the economy was a mess. I had an April vacation and my wife and I had no plans or ideas on where to go or what to do. Seeing an advertisement in the NRA magazine, I joked to her that we could go. I was not really serious, but she was. She asked me questions that I had no answers for. We owned guns and shot, but we were not serious gun people. I didn’t imagine we would fit in with “that crowd.”

So, I started researching. The meetings are free for members, so you can do the event on the cheap. There was acres of guns and gear – the largest gun show on earth, but you can’t buy guns – just look and learn (i.e. education, with no pressure to buy). There are also seminars and meetings and speeches. And of course, there are other events that require buying tickets. Some are nominal fees and include a nice meal. Others are $500/person affairs.

I chose a few things I though we would enjoy. We discussed and learned and planned. There was only one way to find out if we like it, and that was to try it. And so we did.

I remember standing in line behind another couple. We chatted to kill the time. They asked us how many NRA meetings we had been to. We noted it was our first. They had been coming every year for 20-30 years – a nonsensical number to me at the time. I could not understand why anyone would keep coming back to the same event year after year.

The meetings were very enjoyable. We had a good mix of walking the exhibit hall floors, attending free events and paid events. We played some bucket raffles but marveled at the money some people bid on auction items.

The entire affair was nothing like I expected. It was bigger in every way. It was patriotic. At event after event we said the Pledge of Allegiance and/or sang the National Anthem. Prayer was offered before meals. There were not crazy gun nuts – they were just like us. The politeness of the attendees stood out from the general population.

I got to see - in person - the people in the magazines and TV. We heard them give speeches, and we even met a few. Charlton Heston kissed my wife’s hand, something she will fondly remember for the rest of her life.

In the years following we had kids. BFA could not afford to send anyone, but I thought we should be there, so I went alone, paying my own way and trying to do everything on the cheap. I started meeting other leaders in the firearms movement and getting to know them professionally and personally.

Several years ago, I proposed that BFA should get a booth at the show. We looked into it, but the cost was prohibitive, and we didn’t have enough volunteers to man a booth for a show of that duration. The idea was a pipe dream.

About a year ago, Dean Rieck proposed we get booth space for the 2019 show. It was expensive, but Indiana is close to Ohio and we had grown to have enough volunteers. We made the big decision and started working on the details.

We were impressed by how many of you stopped by to say hi, shake our hands, meet us in person or just say “thank you” for the work we do. That means a lot to a group of volunteers who are paid only with words. Thanks to everyone who stopped by.

I spent considerable time on my own, as did other BFA people. We each took time working the booth, but we also each had events we wanted to attend, lectures we wanted to learn from, people we needed to talk to, and products we wanted to learn about. There is no way to measure the amount of information we learned, or relationships started/built on, the ideas discussed and the benefit to BFA from having so many people participating and learning.

So, we are already planning to attend the NRA show in Nashville. Mark your calendars for April 16-20, 2020. Nashville is a town that is known for a great time. We look forward to seeing many of you there.

A special thanks to all our members. You are the ones who enable us to accomplish great work. We are all part of the same team, and each of you plays an important part. Thank you.