Lt. Gov. Mary Taylor met with a group of approximately thirty sportsmen leaders at the Clark County Sportsmen Club. The group represented a true cross-section of the Ohio sportsmen and women.

In addition to the host club, representative were present from the Greene County Fish and Game Association, Ohio Gun Collectors Association (OGCA), Ohio State Trappers Association (OSTA), Buckeye Firearms Association and even a Lake Erie Charter Boat Captain. The issues and questions presented to Taylor were as diverse as the group.

After the sportsmen introduced themselves, Taylor made it clear she was at the club to listen to sportsmen and not to make a speech. Doug Erwin, who helped organize the meeting, suggested that Taylor make a few comments. She commented, "Thanks for showing up and making your voice heard for sportsmen. We've being doing events like this across Ohio to meet more groups. I am here to listen to what is on your mind. We understand the importance of fishing, hunting and trapping in Ohio. We have great natural resources and share the common goal of protecting them for generations to come." She ensured copious notes would be taken. She said if she didn't know an answer, she would say so, and promised to get back to individual who asked the question.

Tom Ferrell, President of the Clark County Sportsmen Club, presented concerns with the grant system the Division of Wildlife uses to distribute the license writing fee monies back to the sportsmen clubs. Ferrell noted that it is very difficult for small clubs like his to have the resources to apply for the grants. He said that applying for the grants is often done six months or more in advance. His club may get requests for support of shooting events from local organizations at any time throughout the year. While the system may work for larger clubs who have more resources, it is not serving the needs of the smaller club. Ferrell is looking for the Division to be more pro-active to better help the smaller clubs.

Tom Bowersox, representing the OGCA, discussed Camp Perry and especially the rumors surrounding a possible move by the National Matches from the current location. Bowersox also noted there is a continuing need for updates and renovations at Camp Perry. Taylor responded that she didn't know of any plans for it to move. She added that she attended the First Shot ceremony last year and the Camp Perry National Matches are a critically important shooting and economic event. The rumors may be fueled by some changes in the National Match schedule for 2014 and 2015. The World PALMA Rifle Championships will be held at Camp Perry in 2015. Many teams competing in this long-range competition will be traveling to Camp Perry in 2014 for practice or "rehearsal" matches. Thus there are scheduling conflicts on certain ranges during the National Matches with some of the events to be fired in Bristol, Indiana and not at Camp Perry.

There was additional discussion regarding the exodus of the Amateur Trapshooting Association (ATA) Grand American event from Dayton to Illinois. Shooters wanted to know if there is any possibility this event could be lured back to Ohio. The most likely location would be the Cardinal Center at Marengo which currently hosts the Ohio State Trapshoot along with other major events. The loss of the Grand American has caused a ripple effect to the many shooting clubs throughout Ohio. These clubs have lost revenue as many shooters abandoned the sport following the move of the Grand American. Shooters emphasized the need for Ohio to regain this shooting event. They encouraged the Lt. Governor to do more to promote the firearms industry and attract more makers to Ohio. 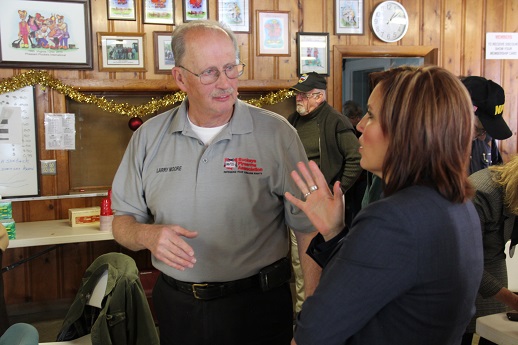 The fishermen in the group wanted updates on the much publicized algae problems especially for Grand Lake St. Mary's and Lake Erie. Charter operator, Charles Crum, noted that the algae blooms hurt the Lake Erie sport fishing industry in many ways. Not only do the blooms reduce fishing and the charter business, they also incur additional expense with boat maintenance especially the engine cooling systems. Taylor provided updates on the state actions and progress at Grand Lake St. Mary's. She also noted that the problem at Lake Erie is a very complex issue that is being aggressively pursued by the ODNR and Kasich Administration. Crum also expressed concerns over the continuing poor walleye hatches saying, "There are a lot of fish being taken with charters, private boats and Canadian commercial operators fishing right on the border line. It is a heavily-fished body of water and the walleye are getting hit hard. It may not be popular but we really need to take another look at closing the season for the spawning walleye. We have to examine methods to protect the spawn and the walleye resource."

Events such as these are to be expected leading up to the November 2014 election. It is good that the Kasich administration and the Lt. Governor are open to listening to sportsmen. It is a testament to the voting power sportsmen hold. After providing the questions to Taylor, sportsmen can now see what answers they get. More importantly sportsmen can evaluate the administration on their actions and decide to vote accordingly. This writer is very comfortable talking to Mary Taylor. I just hope the rest of the administration is paying attention when she returns to Columbus.