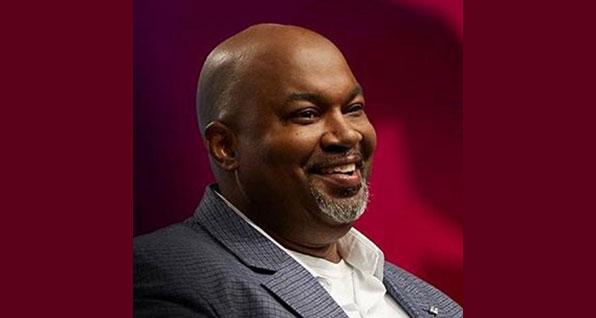 UPDATE March 14, 2020: As a result of the coronavirus and Governor DeWine's order banning events of 100 or more people, the Buckeye Bash scheduled for April 4 has been postponed. We ask for your patience as we watch how this situation develops and consider our options. It is possible that we will reschedule, but we'll see how things go. We will announce our plans as we have more information.

When Mark Robinson walked to the podium at a Greensboro, NC City Council meeting in 2018, he intended to give Council Members a piece of his mind. But he had no idea that the words he was about to speak would go viral and change his life forever.

Soon after the Parkland, FL murders, Mark's hometown City Council tried to cancel the annual Gun and Knife Show at the city's Coliseum, seeking to "do something" in response to gun violence. At the time, Mark didn't even own a gun, but he sensed that something was perverse about Council Members punishing peaceful, law-abiding citizens for a crime committed by an unstable person in another state.

Mark stood up, not even sure about what he was going to say, but understanding that taking away Constitutional rights was wrong. The speech he delivered was captured on video and posted on YouTube by several different people who were inspired by his impassioned words.

The speech quickly went viral, leading to a guest appearance on Fox & Friends and an invitation to speak at the NRA national convention in Dallas along with President Donald Trump and Vice President Mike Pence. His passion and love for the Constitution has now inspired him to run for Lt. Governor of North Carolina.

Buckeye Firearms Foundation is honored to announce that Mark will deliver the keynote address at our Buckeye Bash on April 4, 2020, at the Villa Milano in Columbus, OH.

Here is the video of Mark's speech:

Mark grew up poor in Greensboro, North Carolina as the ninth of ten children in a green shingled house with a red roof. His father was an abusive alcoholic. Their house had no heat, no AC, and didn’t even have a shower for them to wash.

As a child, Mark ended up in the foster care system. He and two of his brothers went to the same home where they were fortunate to end up with a caring family. Some of his siblings were not so lucky, and ended up in abusive situations. Mark and his siblings were able to move back in with their mother eventually, who was a devout woman of faith, and he credits his mother as being the reason he is the man he is today. She taught him about the Bible, and always told her children they could be whatever they put their minds to.

Towards the end of high school, Mark joined the Army reserves where he served as a medical specialist for three years. After high school he went to NC A&T and while there, worked at a factory. Mark planned on staying at this factory and working his way up, and possibly even retiring with the company, but it wasn’t to be.

While he was working there, NAFTA was implemented, and his job like so many others had wages cut. They were cut so badly in fact, he ended up leaving. After that, he worked at a restaurant as a shift worker before becoming the general manager there, and served in that role for five years. During that time, his wife Yolonda started a day care center which grew rapidly, requiring them to acquire a new building.

Eventually, Mark left his job to work at the center where he taught children and cared for them. After eight years, they decided to sell the business, and Mark went back to work at a furniture factory. While there he attended UNCG, studying history. However, this factory job would also cease to exist when the owners decided to move the plant to Mexico, leaving Mark and dozens of others without jobs. He eventually got a new job at a different furniture factory, and had plans to pursue a full-time teaching career, getting his masters and then PhD so that he could become a professor, but it was not to be.

On April 3, 2018, Mark’s life changed when he stood up against the Greensboro City Council in a speech which has been seen over 150,000,000 times. Since that speech, he has served on the NRA National Outreach Board, has appeared on Fox and Friends, has been interviewed by Lara Trump, and traveled the state and nation spreading the conservative message.

Mark resides in Greensboro and is happily married to his wife Yolonda, and has two kids, and a grandchild.