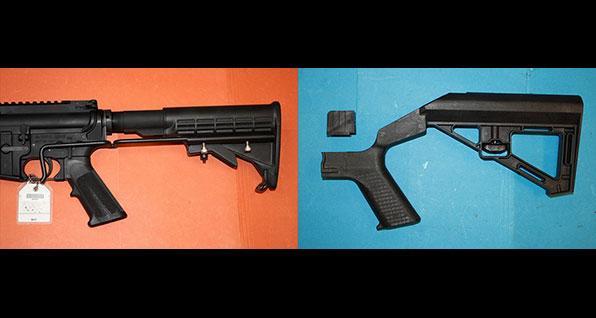 Mainstream media outlets have been devoid of news that yet another court has ruled that a ban on bump stocks instituted by the BATFE at the request of then-President Donald Trump improperly classified the devices as machineguns.

Last March, the U.S. Court of Appeals for the Sixth Circuit ruled that the Bureau of Alcohol, Tobacco, Firearms, and Explosives (ATF) cannot classify bump stocks as machine guns for the purpose of federal firearm regulations. The ruling covers the states of Kentucky, Michigan, Ohio and Tennessee.

At the time of his conviction, Private Akazahg was in Hawaii on the Marine Corps base in Kaneohe Bay. He was found to be in the possession of two bump stocks, and convicted of possessing two machine guns in violation of the UCMJ or Uniform Code of Military Justice.

As explained in the ruling:

"In 1986, Congress passed the Firearms Owners' Protection Act [FOPA], banning possession of machine guns not owned before 1986. FOPA also banned any parts, to include frames and receivers, which were part of a machine gun or were designed for converting a weapon into a machine gun. The current statute at issue is 26 U.S.C. § 5845(b), which defines what a machine gun is. Due to having a bump stock, Appellant was charged under the statute which states that a machine gun is "any weapon which shoots, is designed to shoot, or can be readily restored to shoot, automatically, more than one shot, without manual reloading, by a single function of the trigger."

Akazahg's defense argued that bump stocks did not meet the legal definition of a machine gun. The U.S. Navy-Marine Corp Court of Appeals has now agreed.

In its ruling, the court provides a detailed review of the history of bumpstocks, and emphasizes that the ATF never considered bumpstocks to be machineguns until President Trump ordered ATF to reclassify them as machineguns.

"...the President directed the Bureau of Alcohol, Tobacco, Firearms, and Explosives [ATF] to issue a new interpretation of a rule—that contradicted the ATF's previous interpretation—governing legislation from the 1930s. This Executive-Branch change in statutory interpretation aimed to outlaw bump stocks prospectively, without a change in existing statutes."

And so we have it - yet another court has ruled that Trump and the ATF illegally bypassed Congress to create law. To emphasize this point, they note that a bill called “Closing the Bump Stock Loophole” had been introduced in Congress before Trump acted, intending to change the law to treat bump stocks as machine guns. The bill failed to pass in either the House or Senate.

As such, the Court declared:

We decline to step into the role of the legislature when the legislature has not been clear about whether Appellant’s conduct was criminal. Judge Henry Friendly described the rule of lenity as “the instinctive distaste against men languishing in prison unless the law-maker has clearly said they should.” Here, we express that distaste.

The court concluded with this:

We conclude that Charge VII, Specification 1, by alleging Appellant’s possession of a bump stock violated the prohibition against possessing a “machinegun” as defined under 26 U.S.C. § 5845(b), fails to state an offense punishable under the UCMJ. Accordingly, we determine the finding of guilty for this offense is not correct in law and fact and must be set aside and the specification dismissed.

If these actions are allowed to stand, it will Just. Keep. Happening.