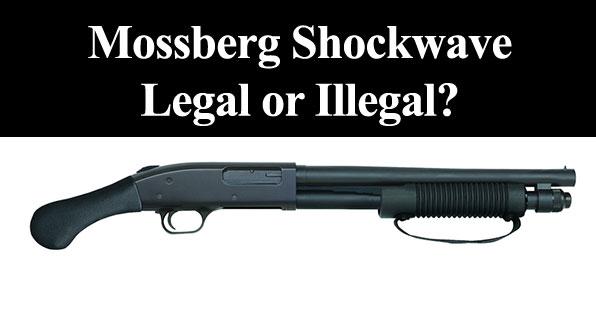 Is the Mossberg 590 Shockwave legal in Ohio?

We've been getting questions about the new Mossberg 590 Shockwave.

It's a 12-gauge, 6-shot shotgun with a 14-inch barrel. It's the barrel length that creates all the questions. The Bureau of Alcohol, Tobacco, Firearms & Explosives has confirmed that the 590 Shockwave is a "firearm" per the Gun Control Act, but it is NOT a Class 3/NFA firearm. You can read their confirmation letter for yourself.

However, while this makes the Shockwave legal on the federal level, what about on the state or local level? Here's a legal opinion prepared by our own Sean Maloney:

The Mossberg Shockwave has a barrel length of 14". Accordingly, with a barrel of less than 16" long, it is considered a "Sawed-off firearm" under Ohio Law. In Ohio, there is no barrel length exception, even with an overall length of 26” or greater. So how is it legal in some states?

Following BATF regulations; if, at the factory during the manufacturing process, a brand-new receiver is fitted with a pistol grip first instead of a shoulder stock, it's considered a Pistol Grip Only (PGO) firearm. Due to the manufacturing process used to build the gun, it doesn't fall under the purview of NFA regulations. Instead, the definitions that apply are found in the Gun Control Act of 1968 (GCA). Under these regulations, the Shockwave is legally considered a “firearm,” not a sawed-off-firearm.

According to the GCA, if the overall length of that firearm, with the pistol grip and barrel installed, is greater than 26", then the barrel can legally be shorter than 18". In the case of the 14" barrel Mossberg 590 Shockwave, the Raptor bird's head grip gives the gun an overall length of 26.32". That makes it a firearm. Although the BATF recognizes it as a "legal" shotgun; under the Ohio Revised Code, it does not meet the requirements.

NOTE: Although the federal government says it's a gun that can be purchased by qualified buyers over the age of 21, some states, like Ohio, have regulations in place banning it and other guns like it.

Unfortunately, for those of us who reside in Ohio, the State of Ohio does not recognize the BATF definition of a "Non-Regulated Shotgun" related to the manufacture and sale of PGO shotguns. Rest assured Buckeye Firearms Association is working on a legislative fix to permit otherwise qualified buyers to be able to legally-purchase the Mossberg 590 Shockwave, and other similar firearms.

However, Ohio Courts routinely turn to common use definitions and use those when a statutory definition is lacking. For instance, the U.S. Code definition of shotgun everyone points to in order to argue it isn't a shotgun would be given great weight. The Ohio Supreme Court has certainly upheld the convictions.

The law will not be interpreted into an absurd result. The common use of shotgun in Ohio is a smooth bore (probably of less than 60 caliber) without regard to shoulder firing or overall length.

So there you have it. According to our legal analysis, the Shockwave 590 is banned in Ohio. It is NOT legal. We don't like it any more than you do. And of course, this ban won't stop any crimes or make anyone safer. But for the moment, that's the way it is.

Sean Maloney is an attorney specializing in gun law and serves as legal counsel for Buckeye Firearms Association, Board Member with both BFA and NRA, and is a Certified NRA Firearm Instructor. His efforts have led to his induction into the NRA-ILA EVC Hall of Fame.