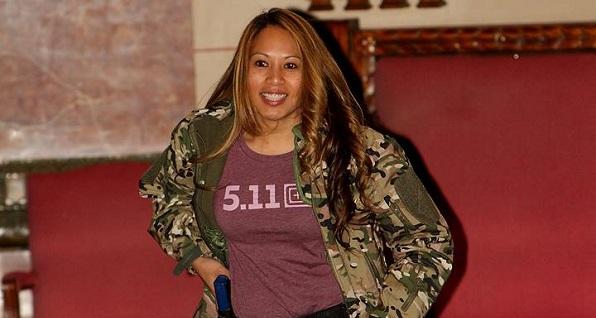 Gun owner turned 2A activist Amanda Suffecool knows the best hope for protecting firearms over the long haul is getting women into the action. She does this through producing Concealed Carry Fashion Shows including one in Kent, Ohio on June 21st. These shows are designed to attract this growing demographic.

When former President B. Obama sealed the Democratic nomination in 2008, Amanda Suffecool started saying, “Someone should do something to protect our rights as gun owners”. That someone became Suffecool who created REALILZE Firearms Awareness Coalition including Eye on the Target Radio.

The mission of REALIZE is to educate citizens as to the historical intent of the Second Amendment to the Constitution of the United States of America, support for responsible gun ownership, and to emphasize firearm education for women who facilitate the transmittal of constitutional awareness and gun ownership to succeeding generations.

An engineer professionally, Suffecool is used to being a woman in a man’s field where she knew women were too scarce in the gun community. Though men dominated this arena, she had the distinct privilege of being raised by a mother who was an NRA & Hunter Safety instructor.

As Suffecool built REALIZE F.A.C. with her brother, Rob Campbell, women entrepreneurs across the country were starting companies in response to the gun industry’s Shrink It & Pink It solution to the growing female demand for products. Simultaneously, concealed carry laws expanded, and record numbers of individuals, male and female, could lawfully carry everyday, in many states.

New Concealed Carry permit holders don’t know exactly how they want to carry, or what is comfortable for them. The options to carry on body include inside the waistband, outside waistband, as well as: undershirts, wraps, girdles, spanks, shirts, pants, shorts, or jackets, shoulder holsters and ankle holsters. Additionally, off body concealment options include purses and bags.

Amanda identified a growing problem. Many great products flooded the market but had limited access by average shooters. Most gun shops are unable to stock an extensive concealed carry selection for lack of space and fear of being stuck with merchandise they can’t sell.

“As an engineer I am wired to fix stuff; this I can fix by bringing the products right to the consumer in a fun, hands-on, try before-you-buy, Fashion Show format,” states Suffecool who has produced several concealed carry fashion shows across the nation.

“We did one in Chicago and HBO did a piece on it. And in 2017 VICE channel did an hour long segment on women and concealed carry which featured our concealed carry fashion show in Independence, Ohio under the title of ‘Packing Heat in Heels’,” continued Suffecool.

On June 21st Suffecool and REALIZE Firearms Awareness Coalition will be producing their third show of 2019 in Kent, Ohio. Collaborating with the Portage County Republican Women’s Club PAC they will be presenting their Under-Cover, concealed carry fashion show, at Underwood Hall of the Kent American Legion.

Using the appeal of familiar names allows attendees to see someone like themselves successfully concealing a firearm. “Everyday people carrying concealed in a variety of ways is the beauty of the concealed carry fashion show,” states Elayne Cross co-author of the book How to Produce a Concealed Carry Fashion Show, with Suffecool.

Local talk radio celebrity, John “Couch Burner” Denning, is taking his pro-gun talk to the runway along with others who want to walk their talk including Portage County Recorder Lori Calcei, Cecilia Robard, Cuyahoga Falls City Council candidate, Rob Campbell co-host of Eye on the Target Radio, and more.

The American conceal carry holder: tall or short, thin or heavy, male or female, old or young, any shape, size, or build, can see the latest options at Under-Cover Concealed Carry Fashion Show in Kent. Tickets are $40 each which includes refreshments. For information visit www.portagegop.com/fashion.