Last week, a "newly-formed" group calling itself "Ohioans for Gun Safety" announced a press conference to discuss their goal to launch a "common sense" ballot initiative to mandate background checks between private individuals in Ohio.

Both the Columbus Dispatch and WCMH (NBC Columbus) covered the event, providing quotes from:

While these media outlets dutifully covered the press conference, in which the group admitted they don't actually have a ballot initiative written (or even that they know for sure they will ever do one), reporters did nothing by way of exploring the background of the people behind the "newly formed" group.

Jonathan Groner is a pediatric trauma surgeon, but what the media never seem to want to mention is that he is a long-time shill for gun ban extremists - a concealed carry protester who once sat on the board of the Ohio Coalition Against Gun Violence.

Press releases from anti-gun rights groups like OCAGV often quote Groner, but only as a medical doctor in Columbus, making no mention of his status an anti-gun rights protester or former OCAGV board member. The obvious intent of this is to give the appearance that Groner is an independent but concerned professional with no duck in the hunt. And time and again, the media has taken the bait.

David Eggert, labeled as the spokesperson and a "founding member" of the newly-minted "Ohioans for Gun Safety," is far from new to the gun control scene. in 2013 he participated in a ProgressOhio gun show protest in Summit County. (Seen at right in this photo by the Akron Beacon Journal's Karen Schiely.) 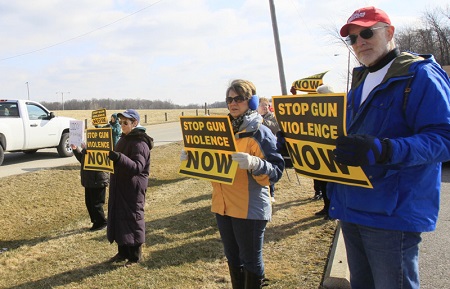 He has testified against reducing the number of "gun free" victim zones in Ohio, suggesting before a House committee that gun owners may become mass murderers if they were “told they are not welcome with their guns” in an establishment.

He has called for gun registration.

Prior to forming this latest gun control group, Eggert founded another one called "God Before Guns: A Multi-Faith Coalition to Reduce Gun Violence."

The phenomenon of gun ban extremists failing to convince the public on their gun control schemes, then rebranding in hopes that poll-tested language like "common sense" and "gun safety" will fool people into supporting the same rejected ideas, is nothing new.

In 2000, Monster.com billionaire Andrew McKelvey committed more than $12 million toward the creation of the "Americans for Gun Safety." McKelvey had always donated to Handgun Control Inc., but eventually decided that the gun control movement's best chance of success was going to come about by fooling Americans into thinking they were actually pro-gun.

"I told them that Handgun Control was the wrong name. I thought what they were doing was great but I thought it could be done differently," McKelvey once told Reuters News Service. (Handgun Control Inc. did eventually take McKelvey's advice, and changed its name to The Brady Campaign to Prevent Gun Violence.)

McKelvey's AGS lasted just a few years, having failed in its mission to disguise its gun control agenda in poll-tested language.

But other gun control outfits decided to try McKelvey's strategy.

The anti-gun Joyce Foundation, which once counted Barack Obama among its board of directors, began funding the "Freedom States Alliance," a network of state level gun-control groups which promoted a blog under the equally misleading name "Gun Guys." The once active blog has gone from several posts a week to having not had even one post since 2010, and FSA itself has also disappeared.

Similarly, gun controllers masquerading as pro-Second Amendment rights advocates under the name of American Hunters and Shooters Association (AHSA) folded up shop in 2010, two years after having been used by the media to prop up the notion that then-presidential candidate Barack Obama was not a threat to gun rights.

"Ohioans for Gun Safety" is just the latest attempt to rebrand gun control, an idea that has been soundly rejected by voters in this state and across the country, again and again and again. The so-called "gun safety" group doesn't even contain one single mention of gun safety on their website. That's because they, like so many that have come and gone before them, aren't about gun safety at all.

They're still all about control.