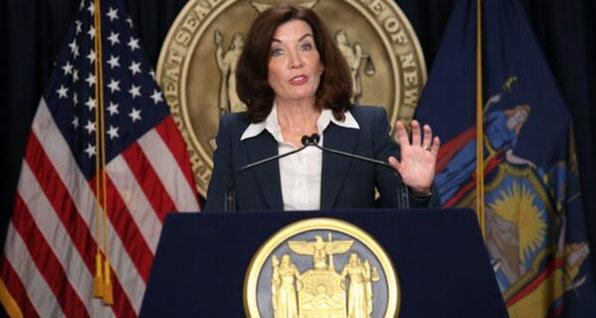 The Hochul Government did not make changes to the New York Gun Law, NY CLS Penal § 400.00 et. seq., to comply with the High Court’s rulings in Bruen, but, rather, drafted the amendments to constrain and, in fact, eliminate lawful concealed handgun carry throughout the State, consistent with her Government’s plans to effectively negate exercise of the fundamental, unalienable natural law right codified in the Second Amendment.

Democrat Governor Hochul would like the public to believe that the amendments comply with the Bruen rulings. They do not. It is all a sham.

But, to machinate such an elaborate hoax to waylay the U.S. Supreme Court and hoodwink the public takes time, money, effort, and cunning, and Kathy Hochul must have had all of that, suggesting she surreptitiously received an advance copy of the decision after November 3, 2021, Oral Argument.

This is reminiscent of the illegal unveiling of a draft opinion of the Dobbs abortion case weeks before the Court released the final and official version of the decision.

The breadth and depth of the amendments to the Gun Law are substantial. They are all collected under the vague, ambiguous, and deceptive title, Concealed Carry Improvement Act (“CCIA”). The title doesn’t illuminate; it deliberately hides and obscures.

Yes, the New York Government did delete the offending words “proper cause” from New York’s Gun Law, NY CLS Penal § 400.00, but doing so changes nothing apropos of compliance with the Bruen rulings. The CCIA is worse, much worse than the Gun Law had been, with the offensive verbiage intact.

Bruen held clearly and categorically the State’s “proper cause” requirement is unconstitutional and inconsistent with the exercise of one’s natural law right of armed self-defense outside the home.

Kathy Hochul and Albany remain undeterred. The State Legislature merely substituted “proper cause” with another verbiage that accomplishes the same thing and, disturbingly, goes beyond the old and problematic “proper cause” requirement. And CCIA maintains the multiple-tier handgun licensing structure.

Those who at present hold a valid New York handgun license, whether “unrestricted” or “restricted,” or hold a highly restrictive home or business premise license, under the original licensing scheme, should have known what was coming.

On June 6th 2022, a few weeks before the official release of the Bruen decision, Hochul signed a ten-bill antigun package into law.

Both Albany and the Hochul Administration had no intention of allowing the U.S. Supreme Court to throw a wrench into the Government’s plan that had, heretofore, been going to plan to eventually reduce lawful armed self-defense to a nullity.

Recall that Hochul’s predecessor, Andrew Cuomo, had successfully fast-tracked into enactment the notorious New York Safe Act of 2013. The enactment of the NY Safe Act was a harbinger of things to come.

At the time Governor Cuomo signed the Act into Law, we at AQ had correctly pointed out that no one should construe the NY Safe Act as the end goal of the Anti-Second Amendment Government’s effort to severely constrain lawful possession and ownership of firearms. NY Safe Act is a work in progress, we stated, in an article posted in AQ, on February 18, 2020. And right, we were.

The NY Safe Act and CCIA, and a plethora of other Anti-Second gun laws, are grandchildren and great-grandchildren of the New York Government’s plan to constrain civilian citizen exercise of the right of the people to keep and bear arms.

The genesis of that plan was hatched well over 100 years. It was the Sullivan Act of 1911. The Sullivan Act ushered handgun licensing into the State.

Through each successive incarnation, the Sullivan Act became progressively worse, progressively constricting and inhibiting the exercise of the natural law right of armed self-defense. And with each successive enactment, the Anti-Second Amendment Government became more emboldened; enacted increasingly dubious and extravagant antigun laws.

On June 24, 2022, just one day after the release of Bruen, Hochul issued a stern warning, albeit couched as a mild;

“reminder, to gun owners that the U.S. Supreme Court’s Thursday decision to strike down New York’s concealed carry law does not mean New York State’s licensure processes and rules do not need to be followed. It does not automatically give current residential permit owners the ability to carry guns outside the home. Gun owners are required by law to follow current restrictions.” So said the Governor.

And she did not bother to hide her bitter anger over the rulings, her hatred of the Second Amendment, her resentment of the U.S. Supreme Court, and her disgust toward those citizens who would dare to exercise their natural law right, codified in the Second Amendment to the U.S. Constitution.

Calling the Bruen rulings “appalling”, Hochul responded to them with affected piety as she simultaneously rebuked the Court that issued them:

“As the case returns to the lower court, we encourage responsible gun owners to continue to follow their current restrictions and always put safety first. While we are disappointed with the Supreme Court’s reckless disregard for the safety of our communities, we are prepared to fight. I am planning for a special session of the legislature where we will explore a wide range of legislative options that will keep us in compliance with this ruling, while also creating a thorough and strict permitting process that prioritizes the safety of our communities. I look forward to working with the legislature, local and county government leaders, and legal experts, and will stop at nothing to protect New Yorkers.” Id. So said, Governor Hochul.

The Governor’s remarks are glaringly, blatantly inconsistent. In one sentence in the afore-recited passage, she expressly contradicts herself.

Hochul says she and the Legislature in Albany “will explore a wide range of legislative options that will keep us in compliance with this ruling, while also creating a thorough and strict permitting process. . . .” Let’s analyze that.

Governor Hochul has just squared the circle. Quite an achievement.

How does that work? If she can get away with this, it doesn’t bode well for those expecting to now be able to exercise their right of armed self-defense in New York unimpeded.

Nonetheless, one is expected to take Hochul and Albany at their word that they drafted the CCIA to comply with the Bruen rulings and allow for armed self-defense in the public realm, even as they clamp down even harder on one’s right to armed self-defense outside the home as well as in it. Her arguments are nonsensical; her actions outrageous. So, then, what else is new? It’s business as usual in New York!

Reprinted with permission of Ammoland.

About The Arbalest Quarrel:

Arbalest Group created `The Arbalest Quarrel’ website for a special purpose. That purpose is to educate the American public about recent Federal and State firearms control legislation. No other website, to our knowledge, provides as deep an analysis or as thorough an analysis. Arbalest Group offers this information free.