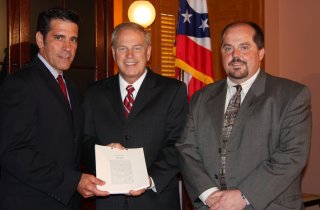 Strickland called the bill “common-sense legislation”, and stressed that it will also clear up ambiguous sections of Ohio's concealed-carry law.

“What we've clarified in this bill I think will go a long way toward providing both law enforcement as well as law-abiding citizens some confidence that what they're doing is, in fact, consistent with the law,” he said.

“I want to thank all parties concerned for working together to make this victims’ rights bill the law in Ohio,” said Chris W. Cox, NRA's chief lobbyist. “When you're confronted by a criminal, you don't have the luxury of time. Under the ‘Castle Doctrine’ provision, if someone breaks into your occupied home or temporary habitation, or your occupied car, you now have an initial presumption that you may act in self defense and you will not be second-guessed by the State. The ability to protect yourself and your family from harm is important no matter where you are.”

Also included in SB184 are several pro-gun provisions that make Ohio's concealed carry laws more “user friendly”. Among these revisions include important clarifications for persons without a Concealed Handgun License (CHL) to legally transport firearms in an automobile, and pick up/drop off abilities for license holders in school safety zones. The bill also designates mandatory legal fees for gun owners who require court orders to have firearms returned to them, decriminalizes concealed carry in privately owned parking garages, allows permit holders to carry a firearm in an unlocked glove compartment or center console and removes the written test requirement for renewal of a concealed handgun license. If your Representative or Senator voted in favor of SB184, you should also call them and thank them. These calls are important so please take the time to thank those who have worked so hard in the last few months to pass this excellent piece of legislation.