HB495: Definition of "unloaded" gun is now fixed for all Ohioans; "No Guns" signs come down in Statehouse parking garage

by Ken Hanson and Sean Maloney

HB495, sponsored by Rep. Terry Johnson (R) and passed into law last December, became effective March 27, 2013, and is now the law of the land. The reforms make three changes to current law:

There are now ways to have a loaded magazine in your vehicle.

The new law allows anyone to have a loaded magazine or speed loader in the vehicle. THERE IS A TWO TIER approach to this.

For someone who does not have a Concealed Handgun License, that person may have loaded magazines or speed loaders in the vehicle so long as:

In addition to that important change, two other changes were made. 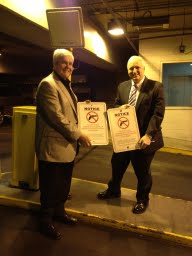 Finally, HB495 gave Ohio handgun licensees permission to store our guns, in our vehicles, parked in the State House Parking Garage in Columbus, Ohio. Representatives Ron Maag (R-62) and Terry Johnson (R-90), after working to pass the law, took time out of their schedules this week for a little manual labor - they removed the "no-guns" signs themselves!

Thank you, Reps. Maag and Johnson, for all your work. We know this is just the beginning, 2013 is going to be a very good year for freedom in Ohio!