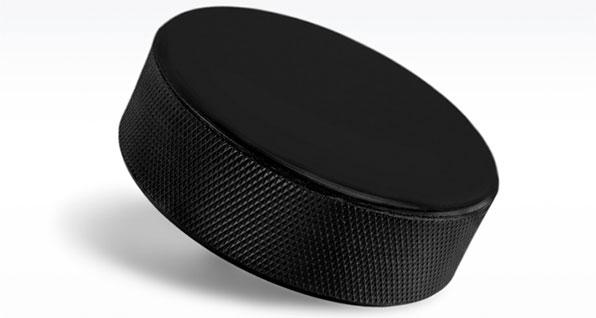 You know the saying: to stop a bad guy with a gun, you need a good guy with a ... hockey puck?

Sounds crazy, but that's what they're saying at Oakland University in Michigan. From Fox News:

A university in suburban Detroit is distributing hockey pucks as a form of self-defense against potential active shooters, according to reports.

"The first thing that came to my mind was a hockey puck. I was a hockey coach for my kids growing up. I remember getting hit in the head with a hockey puck once and it hurt," university police Chief Mark Gordon told Detroit's FOX 2.

Go ahead and make your jokes. This is a pretty easy setup to make fun of these folks for being "dumb puckers." Or maybe we could laugh about people bringing a knife puck to a gun fight.

But that's too easy. Besides, I think this story suggests something positive is happening in schools all over the country. The story goes on to say:

The black discs were distributed earlier this month, and are part of a campaign to raise money for interior locks on classroom doors, the report said.

The effort, spurred by the need for safety education after the Virginia Tech rampage in 2007, will "empower faculty and students to have a plan to have something to defend themselves rather than just freezing in place," Gordon told the Detroit News.

Think about that. This isn't what people used to say. The response to reports about active killers used to be outright denial. But now they're talking about wanting to do something, wanting to respond, wanting to not just freeze and feel helpless. That's progress.

You've probably heard of the 5 stages of grief: denial, anger, bargaining, depression, and acceptance. I'd like to suggest that students, teachers, parents, and even law enforcement have been moving along this sequence rapidly as they struggle with the idea that people in schools must respond immediately to school shootings with lethal force, instead of waiting for someone else with a gun to arrive.

Denial: "School shootings aren't a real problem. Besides, police will show up and protect the kids."

Anger: "Guns in schools? What if someone gets hurt? No way! That's crazy! We have to fight this."

Bargaining: "Maybe schools do need to respond immediately. But what about just throwing rocks or hockey pucks?"

Depression: "I don't like that some teachers are armed. I wish there were another way."

Acceptance: "Well, it seems to work in other schools. Actually, I'm glad someone can respond quickly."

Where people are in this sequence depends on many factors. But clearly, most reports about school security today indicate that, overall, our society is in the bargaining stage. We've overcome our denial of the problem, dealt with the initial anger about having guns in schools, and are now seeking ways to respond to active killers, even if some of those ways are not effective in the real world.

So let's give the folks at Oakland University a pass on the jokes and snarky comments. Along with schools all over America, they're making progress.

We launched our FASTER Saves Lives program back in 2012 after the Sandy Hook Elementary School massacre in Newtown, CT. We offered to train 24 teachers on how to carry a gun at school, stop an active killer, and provide medical care until professional help arrived. Many people rolled their eyes, deeply entrenched in denial. But when more than 1,000 applied for the class, we knew something was happening.

Today, just 6 years later, 2,000 teachers and staff have gone through the program in 250 school districts across 15 states and in 77 of Ohio's 88 counties, with thousands more on a waiting list. And similar programs are popping up coast-to-coast. In fact, 36 states allow teachers to carry firearms at school, and 19 of these states have programs in place. In Texas and Utah, teachers and staff have been carrying guns for more than a decade.

So if the schools in Michigan want to arm their students with hockey pucks, that's fine by me. They're halfway to realizing the brutal truth about active killers: to stop a bad guy with a gun, you need a good guy with a gun.