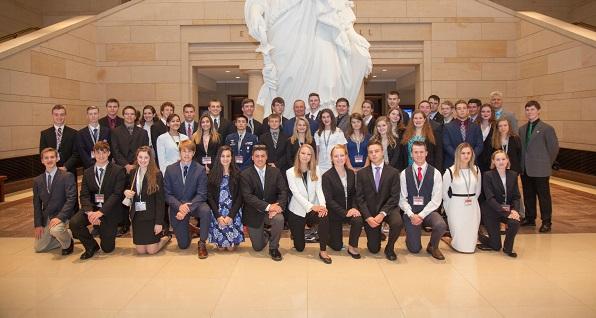 The NRA Youth Education Summit (Y.E.S.) has been taking some of America's brightest and most patriotic youth to Washington DC each summer for over two decades. The high school juniors and seniors spend an action packed week in the capital. They meet the leaders of our country, visit historical places and engage in enlightening competitive debates. The program has enriched and motivated scores of young leaders. The mission of Y.E.S. is explore our American government, Bill of Rights and the U.S. Constitution. It encourages participants to become responsible citizens who participate in the democratic process and return to their community with a proactive voice for the Second Amendment. Y.E.S. also offers up to $50,000 in college scholarships for students who demonstrate strong leadership skills and knowledge especially during the debates and current event seminars.

NRA Board of Directors member Linda Walker notes, "The National Youth Education Summit (Y.E.S.) program is a unique opportunity for some of America’s brightest and scholarly high school students. The students I’ve had the honor of meeting, who were participants, are very special. They are intelligent, very patriotic and enthusiastic to bring back to their communities what they learned over the course of the week they were in Washington, DC. These youths are our future leaders. This program exists because of the generous donations made to NRA’s Foundation, which is an educational division of the NRA.”

One lucky Ohio senior from Coldwater High School was selected to make the trip in 2018. Elizabeth Schoen is a rather shy young lady but highly motivated in learning with a strong love of the outdoors and shooting sports. I first meet her at the League of Ohio Sportsmen Coonskin Cap Brigade outdoor youth education camp. She completed that four-year program and was invited by instructors to return as a Junior Leader at the camp which she has done for about five years. Last summer she was all excited to share her NRA Y.E.S. experience. 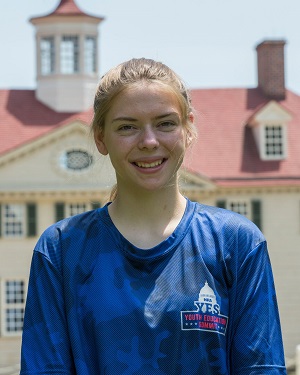 Schoen explained how she was encouraged to apply by her brother and Father saying, "My Dad heard about the program when my brother was eligible. They researched the program and he applied but wasn't accepted. It is a national scholarship so I really didn't expect to win. My first thought was that it would be good practice for writing other scholarship applications. I thought it was a good opportunity to learn. I am so glad I followed through with the application. Being with the NRA leaders and the other young people sounded like one great experience."

The application process is rather challenging. Prospective students must research and submit a paper on a specific topic. Schoen explains, "We had to chose a topic from three subjects. I chose the one "Does the Second Amendment still hold the same meaning today as for our Forefathers". I had to research the Second Amendment and present a conclusion. I concluded that the Second Amendment still holds the same meaning today. The reasons for the amendment have changed. The meaning of the words are used differently today, especially the "well regulated militia" phrase. At that time the militia was the people. There wasn't an actual military. The Founding Fathers feared a permanent army because the British used their army against the people. It is the same as today that our citizens should be well armed and have access to arms. The Founding Fathers wanted citizens to be able to take over the government if it becomes tyranny. The other reason is for self-protection and that is the same today also. But it is also different because then it was the wilderness of a new country but today it is self-defense."

The NRA website explains that every Y.E.S. experience is connected to history. The NRA National Firearms Museum features weapons from wars and other important periods in America’s past. The federal government branches the students visit have preserved Americans’ rights and freedoms since the establishment of the Constitution. Memorials reminded everyone of the greatest leaders, heroes and defenders of freedom in American history. An important part of American’s freedom is our democracy.

Students get a firsthand look at the institutions involved in the democratic process and American politics. They tour the U.S. Capitol, visit the Supreme Court and explore the National Archives where they see the Constitution, Declaration of Independence and Bill of Rights. A current events discussion and formal debate provided the opportunity for the students to engage in the political process by discussing relevant and timely topics.

Schoen comments on her experience, "I've been to Washington DC before. My favorite thing was the Marine Corps parade, the marching band and different parade formations. It was very cool. I also really enjoyed the Marine Corps museum. Another very big part was going to the NRA headquarters. We got to shoot at the NRA range and that was awesome! We shot .22 rifle, pistol and AR-15. We got to shoot different style rifles and pistols. I've shot a lot with my family but there were a couple of people who had never shot previously. It was a real mixed group of shooting experience and everyone had a great time. I learned so much about the NRA. They talked about to us about all the programs the NRA offers. I never realized how many programs the NRA is involved. I didn't realize all the programs that don't involve shooting guns. It's personal protections, Refuse to Be a Victim, Eddie Eagle and they help schools with protection against intruders."

Schoen has brought her experience back to Ohio. She loves to talk about the NRA and to encourage others to apply to the Y.E.S. She adds, "I will speak at the local NRA banquet about the Y.E.S. program. Everyone should definitely submit an application. It's a real opportunity to learn more and meet some amazing people. I'm a shy person and was scared to go. I got so close to the others in the program. We have a group chat. Someone is always talking and texting. It was so much fun. It changed my point of view on many topics. I know it was eye-opening for so many of us."

If you are currently a high school sophomore or junior actively engaged in academics, leadership and community service now is the time to apply. Applications for Y.E.S. 2019 are now open! The Y.E.S. 2019 sessions will be taking place July 8-14 and July 22-28. More information can be found online at https://yes.nra.org/ or by calling the NRA at (800) 672-3888 ext. 1351 or email [email protected].