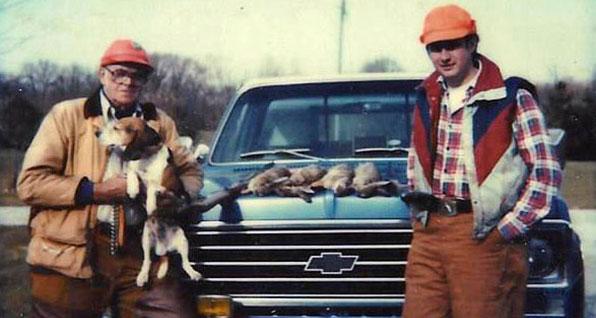 The upland game season is here and I have been running my beagles. I thought about how long I've been hunting with beagles and chasing rabbits. I thought about how that started with family in Kentucky. The next thought was about an old friend and hunting buddy from nearly forty-years ago.

He was an old rabbit hunter when I met him sometime around 1976, as best as I can recall. I was about twenty-six and he was about sixty. We met when I sold him a little female beagle. The years were already telling on him due to breathing issues. He had been a gunner in WWII and flew in the Berlin Airlift. Surviving that was almost a miracle. He was retired, I believe, from culinary work at the University of Dayton. He lived in the country south of Jamestown where he grew a large garden and sold vegetables in the summer. He loved to fish but he really lived for his beagles and rabbit hunting. His name was Aubrey L. Stephens but everyone around town knew him as "Steph."

It was the spring of 1977 when we went to Fairborn for a male pup. Steph wanted to improve the bloodlines in his kennel and this breeder had outstanding beagles with solid champion bloodlines. That pup was named Stephens King and became an anchor in his kennel. It was also bloodlines I kept in my dogs. Along with several of my dogs, we had a very good pack of rabbit hounds. I inherited my love of rabbit hunting and beagles from my family in Kentucky. However, it was hunting with Steph, who was wise in the ways of the hounds and the rabbits, that really made a difference.

I loved hunting with him. We were certainly two kindred spirits separated by a couple of generations. Because of the breathing issues Steph hunted much slower than I did. I had young legs and wanted to cover a lot of ground. He also had his dogs work slower and closer. In those days, without the threat of encountering deer, many guys would simply drop the tailgate and let their dogs range. He taught me to slow down. His motto was "It's not how much cover we walk but how we walk the cover." He taught me to work it thoroughly and stop marching past sitting game. It was a lesson well learned and passed on to my children and, now, grandchildren.

We also shared a loved of side-by-side double barrel shotguns. Steph hunted with an exquisite Charles Daly while I had the working man's Stevens 311, both were in 20-gauge. Steph taught me how to reload shotgun shells and gave me his "secret recipe" for 20-gauge rabbit loads. I still use the old reloader I got from him and still load that same recipe although some powder is not longer available. We had a bit of friendly competition over who would kill rabbits with one-shot or miss. The guy who shot and missed the most would have to buy lunch. It made me much more careful in picking my shots as I didn't have much extra cash to waste with a wife and three young kids at home.

I especially remember one year when he was on a long streak without a miss. We had quite a large pack of hounds, maybe eight or ten. They were running hard. The pack had split and I was confused as to which way the rabbit might go. Suddenly I heard Steph shoot. Then about 20-seconds later I heard another shot. All the dogs got quiet. Some of the dogs would cut back to us at the sound of the shot so I wasn't surprised. I thought, "Finally he has a miss!" When I got to Steph, he was field dressing a rabbit with a number of hounds jumping around him. I asked him what happened? He just smiled and pointed about 20-yards away to the second rabbit in the brush. He hadn't missed! The split pack was running two rabbits and they both passed a little too close to his Charles Daly. I can't remember how long his streak continued, but I'm sure I bought a lot of lunches that year!

While well known for the beagles and his garden patch, he was perhaps better known as a chef for the lavish wild game dinners. He had a second full kitchen in his basement. Not only was he an excellent cook; his presentations always stole the show. Several times a year he prepared a wild game feast for his neighbors. I was blessed to share in many of those. However, there were a number of times after a hunt that I may have stayed just a bit too long and, perhaps, enjoyed just a little too much bourbon with him. That got me in hot water with the wife more than a couple of times.

Several very good years of beagles and hunting soon slipped past. His step continued to slow and the time he was able to spend afield was reduced due to the breathing issues. Finally in the fall of 1983, he was forced to retire the beagles. He and his wife moved north to Bluffton where she had family. I got his beloved King who continued to hunt well for me. I gave him the home for life that I promised Steph. We kept in touch for many years. He passed away in 1995 at the age of 78.

I think about him each hunting season. I suppose if there are beagles and rabbit hounds in Heaven, he is still having a great time. However, it seems memories have hit me a little harder lately. Perhaps it is the aches and pains that come with turning seventy. Perhaps it is my hands with the big knuckles or the weathered and chiseled lines on my face. I am not sure how time went so quickly. It suddenly became clear. I realized that I have become that old rabbit hunter.