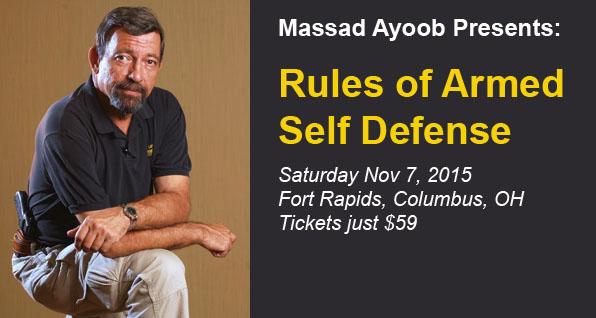 Only 400 seats available - get your tickets today!

This is a practical workshop dealing with real-world situations in the home, at your place of business, and on the street.

[Massad Ayoob] Massad Ayoob has been handgun editor of GUNS magazine and law enforcement editor of AMERICAN HANDGUNNER since the 1970s, and has published thousands of articles in gun magazines, martial arts publications, and law enforcement journals. He is the author of more than a dozen books on firearms, self-defense, and related topics, including “In the Gravest Extreme,” widely considered to be the authoritative text on the topic of the use of lethal force.

Mas has received judicial recognition as an expert witness for the courts in weapons and shooting cases since 1979, and has been a fully sworn and empowered, part time police officer for over four decades. Ayoob founded the Lethal Force Institute in 1981 and served as its director until 2009, and now trains through Massad Ayoob Group. He has appeared on CLE-TV delivering continuing legal education for attorneys, through the American Law Institute and American Bar Association, and has been retained to train attorneys to handle deadly force cases through the Armed Citizens Legal Defense Network. Ayoob served for two years as co-vice chair of the Forensic Evidence Committee of the National Association of Criminal Defense Lawyers. He also appears in each episode of Personal Defense TV (Sportsman’s Channel).