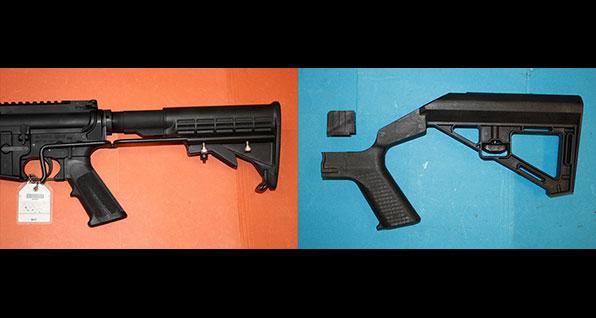 For the record, Buckeye Firearms Association strongly disagrees with the ruling by the Bureau of Alcohol, Tobacco, Firearms, and Explosives (ATF) "clarifying" that bump stocks are "machineguns." We provide the following information for educational purposes only.

Note that lawsuits have been filed in this matter and the possibility exists that there will be court action. Otherwise, this rule goes into effect on March 26, 2019.

On February 20, 2018, President Trump issued a memorandum instructing the Attorney General "to dedicate all available resources to … propose for notice and comment a rule banning all devices that turn legal weapons into machineguns."

In response to that direction, the Department reviewed more than 186,000 public comments and made the decision to make clear that the term "machinegun" as used in the National Firearms Act (NFA), as amended, and Gun Control Act (GCA), as amended, includes all bump-stock-type devices that harness recoil energy to facilitate the continuous operation of a semiautomatic long gun after a single pull of the trigger.

More recently, on December 18, 2018, Acting Attorney General Matthew Whitaker announced that the Department of Justice had amended the regulations of the ATF. The rule was published in the Federal Register on December 26, 2018, and will go into effect 90 days from that date, which is March 26, 2019.

So what should you do if you own a bump stock? The ATF says you must destroy it or abandon it at an ATF field office.

Unlike actual machine guns, there are no exceptions for owning a banned bump stock. Legally, you can't keep it. You can't grandfather it. You can't buy it from a Class III dealer or make it legal even if you were willing to pay the tax and go through the long process you go through to purchase other Class III items. The ATF says you must "divest" yourself of any and all bump stocks. Period.

It is impossible to predict how stringent the government will be on enforcement of this new ban. We will simply point out that if a bump stock is now considered a "machinegun" under federal law, the penalty for illegal possession of a machine gun is imprisonment of up to 10 years, a fine of up to $250,000, or both. In our view, absurd in the extreme. But that's the reality for now.

Crush it. Melt it. Shred it. Destroy it.

For destruction, regardless of manufacturer or model, the ATF says a bump stock must be made incapable of being readily restored to its intended function by, e.g., crushing, melting or shredding the bump stock.

Bump stocks may also be destroyed by cutting, so long as the bump stock is completely severed in the areas constituting critical design features, denoted by the red lines in the specific model of bump stock destruction diagrams.

According to the ATF, destroying a bump stock using any other method may be legally insufficient, such that continued possession of the device may violate 18 U.S.C. 922(o).

Mr. and Mrs. America turn 'em all in!

Your other option is to just hand it over to the ATF. And no, you won't be compensated for the value of the item.

If you choose to go this route, click here to find a field office near you. ATF advises that it is best to make an appointment beforehand.

Townhall.com - Three Pro-Gun Groups File a Lawsuit Over the Bump Stock Ban. Here's What You Need to Know.

WHIO (AM 1290) - This gun device is closer to becoming illegal, but area advocates hope challenges are coming

Dean Rieck, executive director of the Buckeye Firearms Association, said his organization is disappointed there are no exceptions to the federal rule. The government could have allowed owners of existing devices to keep them, for example. Machine guns are banned, but owners of them before laws passed decades ago were allowed to keep them, he said.

The penalty “could be up to 10 years in prison, or a quarter-million dollars in fines, or both,” Rieck said.

“Basically, they’re saying, ‘Give them back to us — hand them in — or destroy them. Period,” he said.

His association has sued Cincinnati and Columbus over bump-stock bans. It won its case against Columbus, but that is under appeal. No decision has been made in the Cincinnati lawsuit.

“We’re very disappointed with this (federal) ruling,” Rieck said. “We urge people to submit comments to tell them not to do this.” (NOTE: The time for public comment is long passed. The reporter misquoted Rieck on this matter.)

Rieck argues forcing people to turn in bump stocks or destroy them may be a constitutional issue because the devices are being taken without financial compensation for their value.