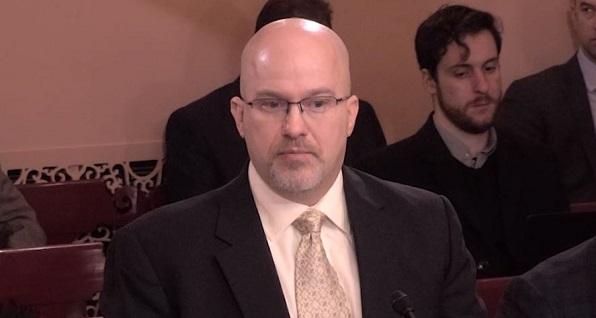 On Wednesday, February 26, 2020, the House Federalism Committee again heard testimony on HB 425 (Duty to Notify). As introduced, HB 425 would modify this rule to clarify when and how to notify to avoid confusion. BFA is also hoping to amend the bill to eliminate the duty to notify entirely.

Etchison's testimony as a 25-year law enforcement veteran was powerful on it's own, and became even more-so as representatives later heard testimony from the Ohio Prosecuting Attorney's Association and the Ohio FOP, both ridiculously claiming that the bill threatens officer safety.

Etchison logically and succinctly explained why the requirement that a legally armed citizen notify law enforcement when they are stopped does not enhance officer safety. He explained to committee members that the way the law is written leaves the legally armed citizen in a position where they can be arbitrarily charged for violating this law since there are no clearly defined guidelines in the law.

Chair Mr. Becker, Vice-Chair Mr. Stoltzfus, Ranking Member Mr. Miller and members of the Committee, thank you for allowing me to testify in support of HB 425.

I am a proponent of this bill who has a somewhat unique perspective, I believe.

And I support this bill.

There are several reasons why I support this bill. First, although the notification requirement has long been touted as an officer safety issue - I disagree. It is a feel good measure added to this law unnecessarily, by well-intentioned police advocates, Command Staff and FOP representatives. One of the first things I was taught as a rookie was to assume everyone you deal with has a gun on them. And it’s one of the first things I have taught my trainees over the years. If it was such a justified officer safety concern then we would see this notification requirement all across the country. That is not the case. And I am not alone in believing this way. I know many Officers and Deputies who are also members of the FOP who feel as I do.

But my real concern about this notification law is with how this law was written and how it could be enforced arbitrarily. For example, let’s look at the wording of the statute. The statute says that a licensee must make that notification “promptly”. In the real world of police and citizen interaction what does “promptly” mean? During the first 5 seconds? 10 seconds? 30 seconds? As with any statute passed by the legislature and signed into law, it is up to the courts or a jury to interpret that statute if it is ambiguous or unclear. In the more than 15 years since this statute was passed it STILL hasn’t really been addressed by the Courts statewide. As far as I can tell the only Court who has addressed this issue is the 11th District Court of Appeals. According to the 11th District, “promptly” is not ambiguous. They said - “To do something ‘promptly’ is to do it without delay and with reasonable speed.” But even then they went on to clarify and say “Certainly, the notification should occur during the initial encounter with the officer.” The initial encounter with the officer could last 10 seconds or it could last 2 minutes. Does that mean notifying anywhere in 2 minutes is doing it “promptly”? Without a standard that applies across the state, how are citizens and the police to know what is and is not required?

With the 11th Districts decision in mind, imagine that you are the legally armed citizen who has been pulled over for speeding. You’re running late and you are on your way to take your small children to school. You’re nervous. Most people are when they’re stopped by the cops. And now your children start crying because they’re scared. And while you are trying to calm them down so that you will be able to hear the officer when he gets to your window you get sidetracked and forget that you have a loaded pistol in the center console. After giving your license to the officer and after he walks back to his car to write the ticket/warning you suddenly realize that you forgot to notify him about your pistol in the center console. What do you do? When he runs your license he will see that you have a Concealed Handgun License. If you do notify when he gets back you just incriminated yourself and have opened yourself up to criminal charges. Do you keep your mouth shut and hope that he doesn’t ask about a firearm? In this case, neither option is a good one.

Another area of the notification law that I believe is ambiguous is the phrase “stopped for a law enforcement purpose”. What exactly does that mean? I can tell you from conversations I have had with many different officers and cadets that “stopped for a law enforcement purpose” means different things to different officers. Some believe that it means any “official” encounter between the police and a legally armed citizen. Such as when you have to make a hit skip report because someone backed into your unoccupied car at Kroger. Other officers believe that it only applies when the legally armed citizen is not free to end the encounter with the officer of their own free will. In other words - that person has been “detained”.

I do not know of a Court case that specifically addresses this. So do we leave the decision on what constitutes “stopped for a law enforcement purpose” up to the individual officer? Nowhere is that phrase defined in the booklet that is required reading for those who wish to obtain their CHL. So once again we have a term/phrase with no definitive answer that is critical to knowing whether or not a violation of the statute has occurred.

About 2 years ago I finally had an opportunity to teach the “2-2O Other Offenses” block in a Basic Police Academy. This is the legal block that covers certain alcohol, firearm and prostitution related offenses. To say I was shocked with how little time was spent covering this portion of the law is an understatement. Nowhere in the lesson plan is the term “promptly” discussed in detail. Nowhere in the lesson plan is the phrase “stopped for a law enforcement purpose” discussed in detail. So now you have individual instructors teaching an important topic without a standard frame of reference to teach by. How are they answering questions about these terms during academy classes?

Overall, we (law enforcement) have done a horrible job in training our officers about the CCW statutes. Notification is just one example. One portion of this law that is clearly defined is the fact that notification is only required when the legally armed citizen is actually carrying their firearm with them. And yet we still have Officers who do not understand that portion of the law.

Notification is an unnecessary requirement for the legally armed citizen and, as written, is a statute that is easily misapplied by law enforcement and should be repealed.

These opinions are my own and are not those of my employer or the State of Ohio.

His entire testimony, including his answers to questions from committee members, can be heard here, beginning at 13:00:

While committee members spent a good deal of time asking Etchison questions, it was interesting to not that not a single question was asked of the OPAA or FOP representatives after their testimony, which came off as typical anti-gun, "sky is falling" rhetoric in the wake of Etchison's powerful testimony.