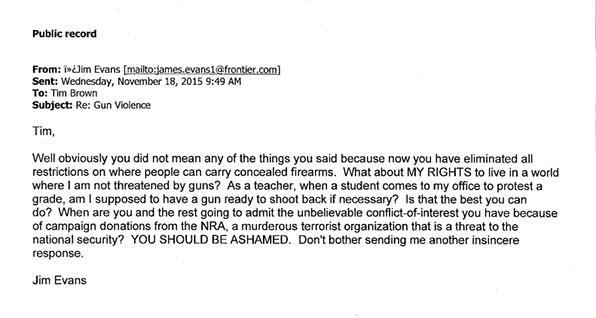 A public records request has revealed that Dr. James E. Evans, a professor of geology at the Bowling Green State University (BGSU), considers the National Rifle Association (NRA), which is the nation's oldest and largest civil rights organization, to be "a murderous terrorist organization that is a threat to national security."

The claim came in an email sent by Evans to Rep. Tim Brown (R-Bowling Green), demanding that Rep. Brown vote against House Bill 48, a bill which seeks to make several critical changes to Ohio firearms laws, including allowing colleges and universities the same right that Ohio's primary and secondary schools already have - the right to choose whether or not to allow concealed carry on their property. The bill was passed out of the House last week on a 68-29 vote, and awaits attention in the Senate.

Mr. Evans, who, ironically, has been a member of BGSU's "Academic Honesty Committee," offers no evidence to back his assertion that the NRA, which teaches firearm competency and safety, influences legislation, participates in or initiates lawsuits, and endorses or opposes various candidates, is a "terrorist organization." (Under the U.S. Code of Federal Regulations, terrorism is "the unlawful use of force and violence against persons or property to intimidate or coerce a government, the civilian population, or any segment thereof, in furtherance of political or social objectives.") Nor does Evans provide evidence to back up his accusations of a threat to national security.

According to his email, Evans seems to labor under the false notion that he has "rights to live in a world where I am not threatened by guns." (I realize I don't have a Ph.D. in the study of rocks, but I've not found that particular "right" enumerated in the Constitution of the United States of America.)

Evans goes on to ask Rep. Brown what he should do "if a student comes to my office to protest a grade. Am I supposed to have a gun ready to shoot back in necessary?" I'm not sure if Brown bothered to answer, given that Evans concluded his letter by saying "don't bother sending me another insincere response," but if he asked me that question, I would inform the nutty professor that there is absolutely nothing stopping a disgruntled student from bringing a gun to his office right now, and that he needs to get his head out of the sand if he believes otherwise. People who want to do violence to others don't care about campus policies or gun bans, but those types of policies are the exact thing that keep peaceable people from being able to defend themselves from such evil.

Finally, Evans asserts that Rep. Brown is operating under an "unbelievable conflict-of-interest" "because of campaign donations from the NRA." The problem with that claim? Rep. Tim Brown has never received a single penny from the NRA.

According to a separate email sent to Rep. Brown from an informant, also obtained by Buckeye Firearms Association through a public records request, it is revealed that Evans participates in a discussion list operating at [email protected], and that he posted additional comments there, presumably to get other faculty members to join his protest. And many did.

In the days leading up to the vote, Rep. Brown received no less than 29 emails from @bgsu.edu email addresses (listed below). 27 other BGSU employees sent a form letter through a website called "the Action Network," which describes itself as "a progressive online organizing platform" that "only work[s] with progressives."

The informant told Brown that not only is the Second Amendment apparently not respected on the [email protected] list, but the First Amendment right to freedom of speech isn't either, at least not for "moderate or conservative viewpoints."

The BGSU campus is a very hostile workplace to anyone who [is] not on the very left side of everything. If anyone ever offers a moderate or conservative point of view on this list-serve they are verbally attacked.

The informant goes on to say that "not everyone feels that it was a bad vote [in favor of HB 48], but it is dangerous to admit as much."

According to the FY2016 First Half Projected SSI Distributions for Universities, BGSU is slated to receive more than $70 million in taxpayer funding next year. Given that gargantuan investment, Ohio taxpayers have a vested interest in ensuring that the money is not being misused.

According to the BGSU website (here and here), the "Handbook of Commonly Shared Employment Policies for BGSU Faculty, Administrative and Classified Staff" states that "It is university policy that all contact with state and federal legislators and governmental agencies be coordinated through the Office of University Relations and Governmental Affairs. That office, working with the President, is responsible for engaging in meaningful dialogue and relationships with government officials and agencies at the local, state and federal levels."

Furthermore, university policy states that "Use of the University letterhead, address, e-mail system or other identification that might associate the content and conclusion of the document with the University should be avoided."

The policy goes on to express that "The aforementioned points on use of the University name, letterhead and e-mail apply specifically to political activities (including lobbying efforts to influence legislation or regulations) by any member of the BGSU community, except in connection with an institutional position taken by the University." (emphasis added)

BGSU's Office of the President has failed to respond to email and phone inquiries about the matter, but at this time, there is no indication that BGSU has taken an "institutional position" on HB 48, or that the efforts coordinated by Evans were "coordinated through the Office of University Relations and Governmental Affairs."

Despite this policy prohibiting their use of BGSU email and name in this way, the following employees of this taxpayer-funded university used their @BGSU.edu email to contact Rep. Brown in opposition to HB 48:

Other emails from BSGU employees were sent via [email protected] or, in a few cases, their own personal email accounts:

While these people have every right to have their own opinions on this issue, they are wrong to make use of university resources in order to attempt to influence this or any other legislation.

We believe prohibiting institutions of higher education from adopting “best practice” protocols for violence including active killer/active shooter is bad policy. HB 48 fixes this problem and gives each institution the ability to do what they believe is best for their staff and students. When it passes in the Senate and is signed by Gov. Kasich, these faculty members can take it up with the parents and students who pay the taxes and tuition through which they are compensated.