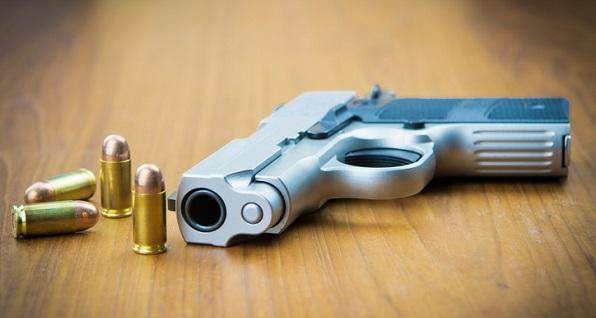 Questioning the Effectiveness of the .380 Auto Cartridge

You folks really like your .380 semi-automatic pistols. Two of the top 10 most read articles on my site are about the .380. Every post I’ve written about this caliber has been consumed voraciously. Lots of the email questions I get from readers concern the .380 as well.

Since my 2011 handgun stopping power study was reproduced in American Handgunner Magazine, I’ve received regular questions about my data, especially data on the smaller caliber weapons.

“The 380 ACP did well in most categories. How come? I thought it was an underpowered round?”

For those of you unfamiliar with my past research, I studied the details of nearly 2000 gunfight incidents. I tracked how well different calibers actually performed in real life. Here’s a summary of the data I reported showing controversial data. Bigger may not be better. 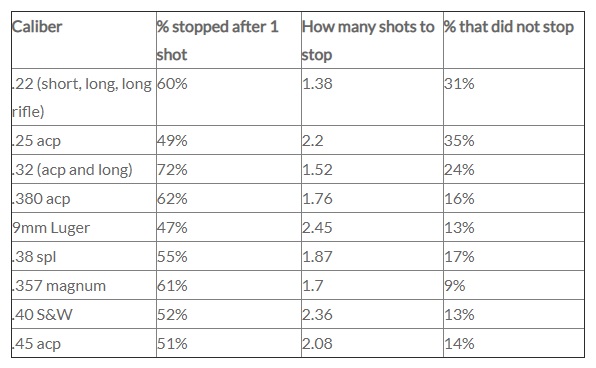 As you can see from the results, the .380 looks to provide better “stopping power” than most of the larger calibers.

The data is what it is. I can’t change that. My study showed that people were stopped with fewer shots from the .380 than with any other service caliber weapon. Does that mean the .380 is the best choice? Not necessarily.

There could be other factors (besides the size of the bullet wound) that caused the smaller number of shots until incapacitation.

I’m just pulling numbers out of thin air, but let’s postulate that it takes five seconds after a person is shot for him to realize he is hit and abort the attack. The actual average time could be higher or lower, but it doesn’t matter. It will still take a few seconds for the bad guy to process the fact that he has been shot and decide it’s in his best interest to escape before being shot again.

If we are dealing with psychological stops and not actual physical incapacitation, firing additional rounds at the attacker during this five second time frame isn’t likely to influence his behavior more quickly. The mental processing takes the time that it takes. Anything that will slow the rate of fire will reduce the number of rounds that the attacker soaks up before he aborts his attack. In other words, the small number of rounds until incapacitation could be more the result of slower firing rate than superior cartridge performance.

Is the .380 likely to have a slower firing rate than a larger caliber? In handguns carried for defensive purposes, yes. Some .380 defensive handguns are of relatively low quality. They can be extremely small and difficult to shoot quickly. Compare your rate of fire between a .380 Ruger LCP and a 9mm Glock. With which pistol can you shoot faster?

Cheap .380 autos are also more prone to having more malfunctions than their full sized counterparts. A malfunction will also decrease the rate of fire. I didn’t factor rate of fire into my study variables. More malfunctions equal fewer shots fired and thereby could have caused the .380 to appear better than many other calibers.

Some of the really small .380s are also difficult to hold when firing. That contributes to slower subsequent shots.

Another fact that many people haven’t considered is the difference between police and armed citizen gunfights. My friend Claude Werner often points out that when a criminal is involved in a gunfight with the police, the stakes are higher. The criminal knows that the cops won’t stop until he’s dead or in jail. That’s not true with a gunfight against an armed citizen. The armed citizen just wants a break in the fight. If he can cause the criminal to flee, he wins and stops shooting.

Many of the gunfights involving 9mm, .40, and .45 calibers in my study were police gunfights. Very few of the .380 data was from police shootings. The very nature of the differences between the victim characteristics in the different gunfights could account for the smaller number of rounds taken by those hit with the .380s.

To wrap this topic up, I will say that if you can put rounds where they need to go on a criminal’s body, the .380 cartridge will probably perform just fine. No one wants to get hit by rounds of any caliber. With that said, and despite the conclusions of my study, I do not believe that the .380 auto works more effectively than a 9mm, .40 S&W. or .45 acp .

Read more about my opinions regarding the .380 cartridge in the article titled Is the .380 ACP an Adequate Caliber for Defensive Use?