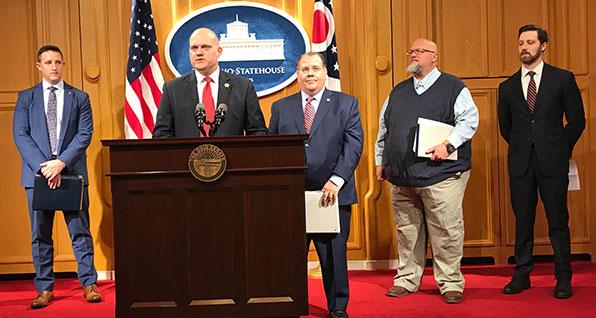 Flanked by both state and national firearms groups that protect the rights of gun owners, State Representative Scott Wiggam (R-Wayne County) and State Senator Tim Schaffer (R-Lancaster) held a news conference at the Ohio Statehouse on Tuesday, May 25, 2021, and announced the introduction of companion bills that define the scope of government power as it relates to firearms during a time of a declared emergency.

"The last year revealed the startling scope of government power during a declared emergency," explained Senator Schaffer. "It is critical that both local and state authorities understand that this power cannot be used to infringe on people's ability to protect themselves and their families."

"Although Governor DeWine's COVID related restrictions did not restrict the rights of gun owners, other states abused their power, going as far as shutting down firearms commerce, including our neighboring Michigan," said BFA Executive Director, Dean Rieck. "This past year provided a clear warning to make sure Ohio laws were crystal clear that an emergency cannot be used as an excuse to seize gun rights."

"Many politicians responded to the fear surrounding the pandemic and the riots that erupted across the country last summer by making it more difficult for the law-abiding to protect themselves, their loved-ones, and their homes," said the NRA-ILA's John Weber. "Restricting the right to self-defense is never the answer when the safety and security of men, women and children are in jeopardy."

The two bills declare firearms possession, transportation, carrying, commerce, training range access as well as hunting and fishing to be life sustaining essential activities. Both local and state government authorities are prohibited from infringing these rights under the guise of a declared emergency either on a local or state level. Further, the legislation provides legal recourse for people who experience unjust infringements on these essential rights.

The bills have broad support with a total of 58 Co-sponsors so far in the House and Senate. Representative Wiggam, Senator Schaffer, BFA, NRA and NSSF jointly called for quick action in both chambers to see these protections enacted.

Listen to our Keep and Bear Radio podcast discussing this legislation: