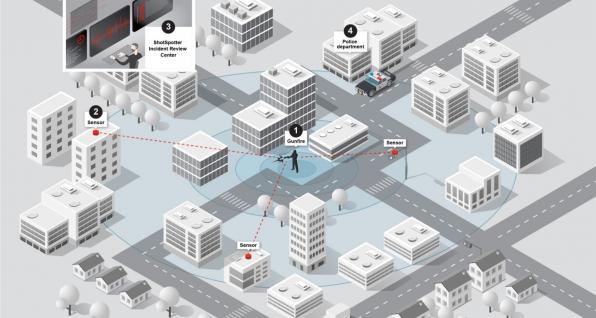 WOUB (NPR Athens) reported recently that despite the investment of hundreds of thousands of taxpayer dollars for ShotSpotter microphones, few crimes have been solved.

Thanks to the new gunshot-detection technology, if a shot is fired in a neighborhood equipped with ShotSpotter microphones, dispatchers get a ping within 60 seconds, alerting them to the location of the shot. Then they put out a call for service, which sends Dayton police officers out to investigate.

In July of 2019, the city of Dayton entered into a $205,000 contract with the California tech company for about 60 microphones. They were installed within a 3-mile radius in Northwest Dayton, a predominantly Black community.

[Major Chris] Malson has worked in the department for 20 years. He says ShotSpotter has helped police become more efficient in finding evidence. Instead of canvassing whole neighborhoods, Malson says, officers can now search specific blocks where the gunshot was picked up.

Since the technology was activated two years ago, his officers have collected over 2,700 shell casings that can be used in criminal investigations.

But while officers may be finding more evidence now, they’re not necessarily stopping crime when it’s happening.

According to data reviewed by WYSO, fewer than 2 percent of ShotSpotter deployments resulted in an arrest. And officers reported incidents of any crime, not just gun crime, only 5 percent of the time.

Got that? All this money, and all these police dispatches, and criminal incidents are only reported 5% of the time, and arrests made only 2% of the time.

WOUB also reports that despite this lack of return on investment, the city recently doubled down on a new contract worth three times what the previous one was:

Attorney Jonathan Manes led the research and says he was shocked at how ineffective ShotSpotter was at leading police to actual shootings.

“So they’re approaching people as if they are potentially the shooter. This isn’t, you know, Officer Friendly walking down the street, just checking in on people,” Manes said. “What the technology claims to do is get police to the scene of a shooting quicker. But if 90 percent of the time police show up and it’s not any kind of that incident, let alone a shooting, I think there’s a real question about whether it’s worth the money.”

Back in November of last year, Dayton almost tripled its spending on ShotSpotter, to nearly $600,000. The city commission approved the renewal, despite concerns from the community and several members of the Community Police Council.

However, one commissioner did vote against it. Darryl Fairchild says the community development block grant dollars that went toward the contract should have gone toward other projects, like creating more green spaces and youth programs.

“We can make these neighborhoods safer, more cohesive, healthier, more vital, and then lo and behold, we won’t have violence,” Fairchild said. “I would rather spend more money on addressing root causes. [ShotSpotter] is supposed to address the symptoms.”

According to the investigation, officers were summoned to Northwest Dayton more than 2,200 times since the microphones were activated two years ago. That’s an average of four police deployments per day.

This kind of misuse of resources and taxpayer dollars should be made front and center in the upcoming Ohio gubernatorial race, where anti-Second Amendment Dayton Mayor Nan Whaley consistently blames inanimate objects - namely firearms - for her city's crime woes in an attempt to take the focus off of inept crime policies like this one.