The Columbus Dispatch is reporting that a man was robbed, then kidnapped, was able to pull his own handgun and shoot his attacker.

A man who told police that he shot a robber in the neck on the Hilltop on Friday evening claims he was abducted at gunpoint and was being driven to a cash machine to withdraw money, Columbus police said yesterday.

Police identified the dead man as Larry N. Mausali, 24, of Parkersburg, W.Va. The shooter was Kenneth Owens, 46, who told police that Mausali took his wallet, then tried to rob him of more by driving him to a bank machine at gunpoint about 7:25 p.m.

In the car, Owens took out his own handgun and shot Mausali near the intersection of N. Hague and Sutton avenues, he told police. Owens described his version of events to police at the shooting scene. Mausali was taken to Mount Carmel West hospital, where he died minutes after the shooting.

Police are investigating and will forward their findings to the Franklin County prosecutor’s office for a final determination on whether the shooting was justifiable, they said.

The Dispatch article fails to identify the victim as a CHL-holder (and the reporter has not yet replied to an email inquiring if he checked), but it seems likely that he was.

This is far from the first example of an Ohio resident protecting themselves with a firearm. And this, like many cases in the past, received a great deal of attention, having been picked up by the Associatd Press and republished nationwide. That is why I find it strange to have read quotes from two different law enforcement officers in recent weeks saying that they were unaware of a concealed handgun licensee having used a gun to defend themselves.

Unfortunately, quotes such as these are used by reporters to offset the other statement constantly being repeated these days by law enforcement - that there just haven't been any problems caused by license-holders. This, the enterprising anti-self-defense journalist asserts, proves that while their anti-self-defense rights friends were clearly wrong about the mayhem they predicted would ensue if we passed this law, the pro-self-defense was also wrong, since no one seems to know of any license-holders who have protected themselves.

The problem is, of course, the claim that there have been no cases of license-holders using a gun to defend themselves is entirely, provably false. 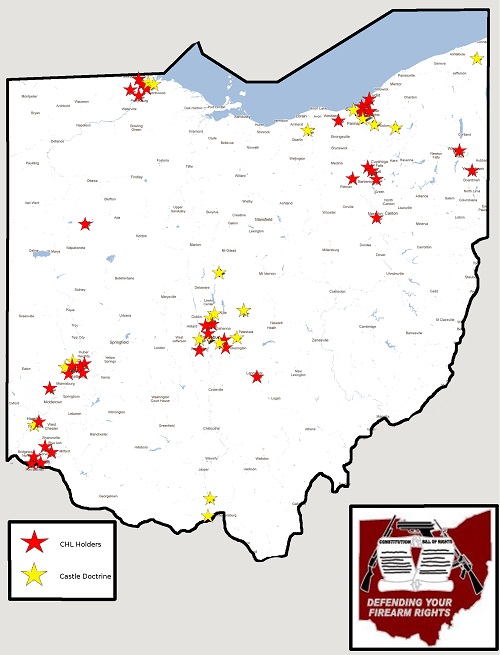 There is something important to keep in mind as you browse the map. Anti-self-defense rights legislators and journalists are fond of claiming that the debate over concealed carry laws are an example of the divide between rural and urban. They claim that people in the cities don't like concealed carry, while people in rural areas do. This is why they opposed statewide preemption of local gun control laws, claiming that localities should be able to decide for themselves on what gun control is necessary at the local level.

But of course when one looks at the areas where people have successfully been able to defend themselves when attacked, they are almost all occurring in the exact areas where these anti-self-defense rights legislators claim people oppose concealed carry.

Thankfully, the anti-self-defense rights extremists didn't get their way, and each year, more and more lives are saved, thanks to the efforts of the many who have come before, fighting the daily fight to first recover, and then improve our laws.

The fight to improve our laws continues. There are still too many places in Ohio where the right to bear arms for self-defense is denied. Our self-defense laws still consider people guilty until they prove themselves innocent. There is work to be done to make sure that more people, who are attacked like this gentleman was, get to return home to their families.