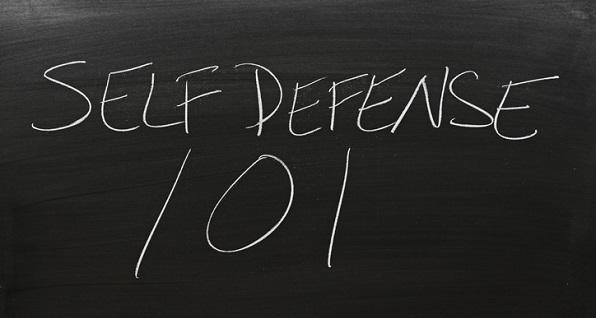 Self-Defense and the Firearms Safety Rules

According to Webster’s dictionary, a rule is:

1) A prescribed guide for conduct or action;

2) An accepted procedure, custom, or habit;

3) A regulation or bylaw governing procedure or controlling conduct.

Rules are meant to be followed and violating them is supposed to have serious consequences. Recently, several of my fellow firearms instructors and I have been engaged in a discussion over the validity of the traditional firearms safety rules and their application to self-defense training.

Depending on the organization there are just three or four firearms safety rules—because people have difficulty remembering more than that. For instance, the National Rifle Association (NRA) has three fundamental
rules:

They also have several other rules for storing and using your firearm. Other prominent firearms trainers and organizations apply the rules developed by Lt. Col. Jeff Cooper, or variations of them. These are:

On the surface, these sets of rules appear to be remarkably similar, with just some subtle wording differences. However, unlike the NRA, Cooper’s rules recognize their application to the defensive use of a firearm, while the NRA’s rules have their foundation in the recreational use of firearms—hunting, target practice/plinking, and competitive shooting activities. Cooper’s addition of his first rule recognizes that more people are injured/killed in firearms accidents with supposedly “empty” guns than any other unintended cause involving firearms.

The theory behind the traditional firearms safety rules is that you must violate more than one of them for something bad to happen. Redundancy is built into them to further limit the consequences of violating them. Take the NRA’s rules for instance; if the gun is not loaded, it cannot be fired and injure someone even if you point it at them and pull the trigger. If you do not point the gun at something you do not what to shoot, even if the gun is loaded and you do pull the trigger, the bullet will not hit the thing you did not want to shoot. If the gun is loaded and you point it at someone/something and if you do not put your finger on the trigger, a properly functioning gun will not fire. Some of the concerns we have with these rules, especially the ones from the NRA, are in their interpretation. For instance, what constitutes a “safe direction?” When is a firearm “ready to use/shoot?”

The first thing that you need to realize when it comes to firearms safety rules is that they are primarily intended to limit legal liability, especially for firearms instructors, shooting range operators, firearms manufacturers, and other firearms professionals. But are there times when it is appropriate to intentionally violate one or more of the firearms safety rules? Those of us involved in the discussion say the answer is probably “yes.”

Perhaps the rule that gets violated the most often, intentionally, or unintentionally, is the one about pointing guns at other people, followed closely by the one about keeping your finger off the trigger. We tell people to never do this. A concern that those of us involved in this discussion have with not pointing guns at other people is that it may create a subconscious psychological aversion to doing so, even when it can mean a difference of life or death for the individual with such an aversion. (Lt. Col. Dave Grossman’s acclaimed books, On Killing and On Combat address this very issue.) The NRA has gone so far as to prohibit their certified firearms instructors from using any targets that can be interpreted to represent a human silhouette in any of the NRA’s basic firearms courses. (The NRA’s basic pistol course is often used to meet state training minimums for obtaining a concealed carry license/permit.) The Second Amendment Foundation Training Division (SAFTD)/ Second Amendment Firearms Training & Education Association (SAFTEA) is extremely cautious to ensure no pictures they use or of their activities can be interpreted as pointing a gun at another individual. However, sometimes it is easier to demonstrate the principle of aim a gun by pointing one at another individual (either in person or with a photograph where the gun is pointed directly at the camera) so the individual can see what a proper “eye-target line” looks like and how the dominant eye should be lined up with the sights. Pointing the muzzle of a shotgun at someone has long been used in determining the proper fit of a shotgun’s stock (“drop” and “cast”) for a particular individual.

There are times when it is appropriate and necessary to point guns at other people during training such as when learning firearms takeaway/retention techniques or during “force-on-force” training. Admittedly these are advanced techniques, and such training activities must NEVER involve the use of live ammunition—instead, using simmunitions, paintballs, or airsoft pellets, along with other appropriate safety gear and protocols. Inert “blue guns” and/or laser training guns that cannot be loaded with live ammunition are also valid training tools in many situations. The dilemma for us then is if it is a “rule” it should apply all the time with no exceptions. But as you can see, there are valid exceptions. So, instead of being a “rule,” not pointing your gun at someone is a strong suggestion—until it is not!

The first “rule” is to ALWAYS KNOW THE CONDITION OF THE FIREARM. This includes firearms you own or that you do not own but may handle, such as when you examine a gun at a gun store/gun show or that someone else may hand to you. It means knowing if it is functional or not—i.e., does it work as intended and do you know how to use it. Is it loaded? Never assume it is unloaded! If the gun is loaded and you need to work on it (or have someone else work on it for you), place it into long-term storage, or need to have it in a situation where an unintended discharge is likely, then unload it. (A good example of this is when you are hunting and need to cross a fence, unload your gun before you climb over/under the fence and then reload it once you get to the other side. Performing dry-fire practice is another example.) If the gun is not loaded and you intend to carry or shoot it, load it. Has it run out of ammunition and it needs to be reloaded? Has a malfunction/stoppage occurred that prevents the gun from working? You need to know how to quickly resolve these situations so you can continue to use the gun when necessary. This involves learning and being able to perform several procedures, sometimes in an extremely limited amount of time—i.e., however long your opponent and/or the situation will allow you to take!

The second “rule” is NEVER SHOOT AT ANYTHING THAT YOU CANNOT AFFORD TO SHOOT. This includes yourself! By “afford” I mean deal with the financial, physical, and mental consequences of your actions. Shooting something or someone will cause damage and that damage, including the loss of life, carries a “cost” in terms of your future liberty, mental health, and finances (i.e., repairing/replacing what you damaged, hiring a lawyer, potential trial/civil lawsuit, medical care, etc.).

There are things we can do to help us keep from shooting at things we do not want to such as not pointing guns at them and keeping our finger off the trigger until the muzzle of the gun is pointed at the intended target. (Notice I used “muzzle” and not “sights” because, while most guns have sights not all of them do. Sights are just mechanisms used to help properly point the barrel of a gun at the intended target and it is the muzzle end of the gun’s barrel that the bullet comes out of when it is fired.) We also need to verify that we are indeed pointing the muzzle at a valid target and there is nothing else of value in the way that could get hit by the bullet as it travels from the gun to the target and beyond. Remember, bullets can travel through many obstacles such as most walls or even tree trunks/limbs and just because we cannot see what is beyond those obstacles does not mean they cannot be hit by the bullet. Learning to shoot a gun accurately helps to ensure we can hit the intended target and nothing else; misses are unacceptable! Learning how different bullets interact with targets will help us understand if the bullet we are using is likely to penetrate completely through the target and travel beyond it.

Violating either of the two rules highlighted above can result in the injury or death of you or others, and/or damage to property— there is no redundancy. If you were negligent in your use of a firearm, it can mean you will be spending time in jail and/or lose most or all the wealth you and your family have. It can also result in severe mental health issues and subject you to the adverse moral and ethical judgement of your family, friends, neighbors, and the community in general.