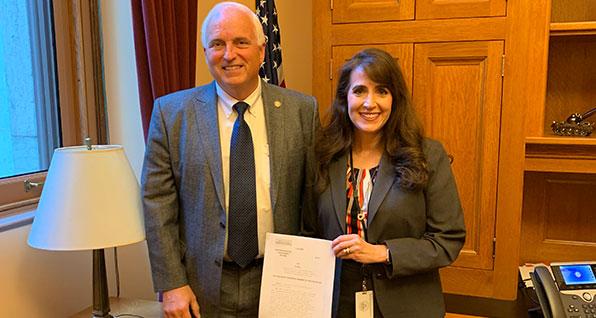 Senators Theresa Gavarone and Terry Johnson have introduced a bill to prevent gun owners from being charged with fees or forced to buy liability insurance as a precondition for gun ownership.

Recently, San Jose, CA, passed the first U.S. law requiring all gun owners to purchase liability insurance and pay an annual fee. Touted as a measure to reduce violence, it is actually a thinly-veiled attack on the Second Amendment. It is well-known that fees and mandates suppress activities at which they are aimed, in this case purchasing and owning firearms.

In response, Gavarone and Johnson have introduced SB 293 to prevent this from happening anywhere in Ohio.

"Gun-grabbing organizations are going across the country to make it tougher for Americans to exercise their 2nd amendment rights,” Gavarone said. “That won’t happen in Ohio while I’m here. Standing up for gun owners has always been a priority for me and this bill is a continuation of that work."

The bill would amend Section 9.68 of the Ohio Revised Code and applies to firearms, firearm parts and components, and ammunition.

"We welcome this simple legislation," said Dean Rieck, Executive Director of Buckeye Firearms Association. "If passed, it would prevent any of Ohio's nearly 2,300 cities, villages, and townships from doing what San Jose did. And the Ohio Revised Code provides legal remedies should a rogue city council impose fees or insurance mandates."

Buckeye Firearms Association supports SB 293 and encourges the Senate to move this bill.