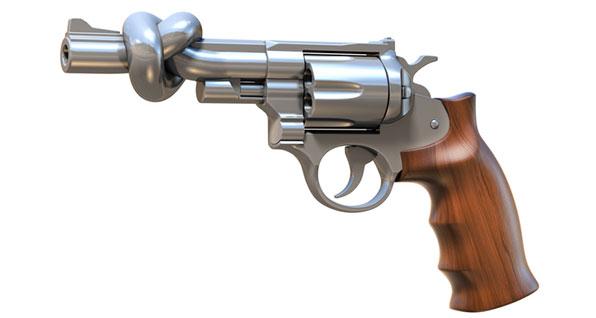 Ohio Senator Cecil Thomas has resurrected 4 failed and pointless gun control bills that died at the end of the last legislative session. The bill numbers are different. But the rights-crushing content remains the same.

Once again, the misleading "universal background check" idea rears its ugly head. SB 73 seeks to forbid the transfer of personal property and require all transfers to be made through a dealer, through a law enforcement agency, or pursuant to a specified exception, and to require background checks for all firearm transfers.

Yes, there are exceptions for temporary transfers, such as for instruction, but only if the transfer happens at a sanctioned range. Something as simple and necessary as teaching firearm safety to your children in your own home would be a crime.

If you ask most people if they support universal background checks, they'll say yes. But what most people don't understand is that criminals, the ones who are committing nearly all violent crimes, know they can't pass a background check, so they avoid them.

According to a 2019 study by the Department of Justice, 43% of criminals got their gun on the black market, 6% through theft, 11% through a straw purchase or as a "gift," 15% from family and friends, and 12% used someone else's gun or found it at the scene of the crime. Only 10% got their gun from a retail source (including 0.8% at a gun show), and this probably involved some complicit dealers.

So how would this bill affect the ability of criminals to acquire guns? It wouldn't. Criminals who are sidestepping background checks now, will continue to do so in the future.

Requiring all transfers to go through a licensed dealer and mandating background checks for all legal transfers serves only to discourage civilian firearm possession.

This bill is an insult to every young person from 18 to 20 years old. It would raise the minimum age to purchase any firearm to 21 and increase the penalty for improperly furnishing firearms to an underage person.

In other words, someone who is old enough to vote or serve their country in the military and potentially die in the line of duty would have his or her Second Amendment rights taken away.

Look at the FBI Uniform Crime Report for 2019, the most current data available, which shows what types of weapons are used to commit murder. Out of 382 murders in Ohio with a firearm, 178 involved handguns. Only 13 involved rifles, and 3 involved shotguns. By comparison, 26 involved knives and 25 involved hands, fists, and feet.

Senator Thomas is obviously not interested in reducing crime, otherwise he would want to ban knives, right? But instead, he not only voted for SB 140 last year to permit the carrying of knives in Ohio, he signed on as a co-sponsor!

This gun control bill is a model of simplicity. Here's the entire text of the bill:

BE IT ENACTED BY THE GENERAL ASSEMBLY OF THE STATE OF OHIO:
Section 1. That section 9.68 of the Revised Code is hereby repealed.

That's it. The irony is that this short bill, if enacted, would do more damage than any other gun control bill in the history of Ohio.

It would remove "preemption," the cornerstone of gun rights in our state and instantly give nearly 2,300 cities, villages, and townships the ability to pass and enforce their own set of firearm laws. This would return us to the bad old days when gun owners suffered under a confusing and unfair patchwork of laws.

Buckeye Firearms Association helped to enact preemption, which became effective on March 14, 2007, and which we updated and strengthened on December 28, 2019, with a historic override of then Gov. Kasich's veto of HB 228. Section 9.68 eliminates the patchwork of gun laws and creates one simple set of statewide laws. Here's what it says:

(A) The individual right to keep and bear arms, being a fundamental individual right that predates the United States Constitution and Ohio Constitution, and being a constitutionally protected right in every part of Ohio, the general assembly finds the need to provide uniform laws throughout the state regulating the ownership, possession, purchase, other acquisition, transport, storage, carrying, sale, other transfer, manufacture, taxation, keeping, and reporting of loss or theft of firearms, their components, and their ammunition. The general assembly also finds and declares that it is proper for law-abiding people to protect themselves, their families, and others from intruders and attackers without fear of prosecution or civil action for acting in defense of themselves or others. Except as specifically provided by the United States Constitution, Ohio Constitution, state law, or federal law, a person, without further license, permission, restriction, delay, or process, including by any ordinance, rule, regulation, resolution, practice, or other action or any threat of citation, prosecution, or other legal process, may own, possess, purchase, acquire, transport, store, carry, sell, transfer, manufacture, or keep any firearm, part of a firearm, its components, and its ammunition. Any such further license, permission, restriction, delay, or process interferes with the fundamental individual right described in this division and unduly inhibits law-abiding people from protecting themselves, their families, and others from intruders and attackers and from other legitimate uses of constitutionally protected firearms, including hunting and sporting activities, and the state by this section preempts, supersedes, and declares null and void any such further license, permission, restriction, delay, or process.

This is what Thomas and Craig want to repeal, so that municipalities have free reign to oppress gun owners in any way they choose. And because SB 76 would also repeal the section that gives a "person, group, or entity adversely affected" the ability to bring a civil action against municipalities, Ohio citizens would have no mechanism to fight ill-conceived gun laws in court.

Not only would this effectively kill the Second Amendment in Ohio and erase all the progress we've made over many years, it would invariably turn otherwise law-abiding gun owners into criminals. That's because it would be impossible for anyone to keep track of all the varying gun laws. You could break the law by merely traveling to and from work, picking up your children at school, or going out to eat.

I don't know whether to laugh or cry when I see a bill like this. It seeks to make it illegal to "import, manufacture, sell, transfer, or possess a trigger crank, a bump-fire device, or any part, combination of parts, component, device, attachment, or accessory that is designed or functions to accelerate the rate of fire of a semiautomatic firearm."

But how will this reduce crime or make anyone safer? How many crimes are being committed in Ohio using these devices?

It's true that so-called bump stocks were used by a mass murderer in Las Vegas in 2017. But that was clearly an anomaly. The murderer outfitted 14 rifles with bump stocks. Why? Because these devices are essentially novelties that function poorly and cause firearms to jam and overheat. Besides, the federal government already banned these devices in 2018.

"[Bump stocks are] horrible. There's no question those things should be illegal," said Matt Bennett, a gun control advocate at the centrist think tank Third Way. But how much would a bump stock ban affect America's broader gun violence? "Virtually not at all" Bennett told me, later adding, "I don't know that bump stocks have ever been used in a gun crime before."

So why introduce a bill to ban them in Ohio? Apparently the logic is, "why not?" It's fashionable and gives Thomas something to talk about. Though he probably won't admit that you can use a rubber band or even your finger to accomplish the same thing as a bump stock, making this bill a total waste of time.

Why not just ban trigger fingers? At least that would have some chance of affecting the number of murders committed with guns.

The sad truth is that none of these bills would reduce crime or make Ohio a safer place to live. Arresting violent criminals, prosecuting them to the fullest extent of the law, and giving them long sentences would. Senator Thomas knows this because he's a former police officer. But does he support that? Of course not.