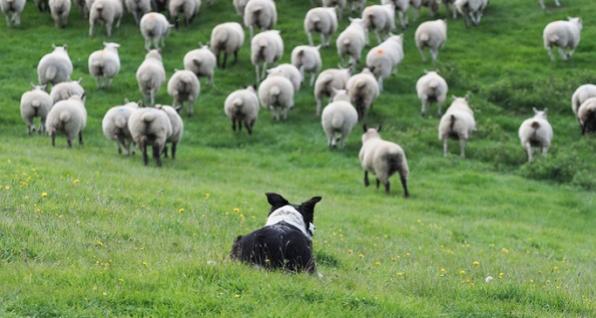 In his introduction to his book On Combat, Lt Col (Retired) Dave Grossman describes society as being composed of three types of people—“sheep”, “wolves”, and “sheepdogs”. He describes the “sheep” as “kind, gentle, productive creatures who can only hurt one another by accident”. These “sheep” comprise most of our society. The “wolves” are that tiny portion of our society that prey on the majority (i.e., the “sheep”). They are the criminals and terrorists—and certain politicians(?)—taking what they want from the rest of society whenever they want, and having no empathy for the “sheep” that they prey upon. The third segment of society is composed of the “sheepdogs”. They are the ones who protect the flock (i.e., the “sheep”) from the “wolves”. Grossman’s story concludes with the words, “I’m a sheepdog. I live to protect the flock and confront the wolf.”

On Combat was published in 2004 and became a favorite on the reading lists of military leaders and others. The concept of the sheep, wolf, and sheepdog have been widely adopted by the military, law enforcement, and others charged with protecting society, and by some in the concealed carry movement. In the past few years, however, the concept has come under some criticism by armed citizen advocates. Indeed, Michael Bane commented on it in one of his weekly podcasts within the last couple of years. His position was that no private citizen (armed or not) should consider himself (or herself) a “sheepdog” because their job is not to protect society but rather to only protect themselves and their family/friends. Only the police and military have the right and responsibility to be considered “sheepdogs”.

I greatly respect Michael’s opinions, but on this specific one I take some exceptions. I do completely agree with his and others who distain the idea that someone who has a concealed carry license can undertake the role of the police in preventing and responding to crime. Armed citizens are not vigilantes. They do not have the right to take the law into their own hands. At the same time, I do not think that an armed citizen has to be considered to be one of the “sheep”. By choosing to go armed they have clearly demonstrated they are not “sheep” if for no other reason than Grossman’s definition of “sheep” is that they are incapable of hurting each other except by accident. If you choose to arm yourself, you have given yourself the capability of killing anyone that you come in contact with. If you do so accidentally, you will be held liable for any damages you cause. If you do so intentionally, you will be judged to determine if your actions were justified or not, and if they were not, you will have your freedom taken away from you.

Because of the definition, the docile “sheep” cannot be trained to be “wolves” or “sheepdogs”. The willingness to do violence is a characteristic that you either have or do not have. “Wolves” and “sheepdogs” have that willingness, “sheep” do not. Indeed, it is that willingness that leads people to join the military or to become policemen. When they retire from those professions, they do not lose that willingness. It is always there.

However, unlike the “wolf”, the “sheepdog” can repress the desire to do violence and live a peaceful, gentle life among the “sheep”. The “wolf” will always need to prey on the “sheep” because they depend on doing so for their very survival. They do not have the ability to subsist by their own means. To a certain extent, they are lazy. They want someone else to provide them with what they are unwilling or incapable of doing for themselves. They must have what only the “sheep”, “sheepdogs” or other “wolves” can provide, and it is easier to get what they need from the “sheep” because they might get hurt if they try to take it from a “sheepdog” or another “wolf”.

The “sheep” would like to believe that the “wolves” can be converted into sheep by teaching them how to subsist on what the sheep subsist on. And, if there are no “wolves” there is also no need for “sheepdogs”. In our modern society, some leading liberal “sheep” have suggested that the way to turn all the “wolves” into “sheep” is to take their ability to do violence away from them by outlawing all teeth. However, by doing so the “sheep” are also outlawing their own teeth and thus their ability to eat the grass they depend on to live.

So, long as there are “wolves”, society needs the “sheepdogs” to do what the “sheep” are unwilling and incapable of doing.

I have now been retired from the military for over 25 years, but when I took off my uniform, I did not surrender my “sheepdog” spirit—that spirit to serve and protect our society. I was born with that spirit as was my father before me. When I put on that uniform, I gave my oath to serve the greater needs of America over and above my own needs and the needs of my family. The commission that I was given when I took the oath is a lifetime one. Although I am no longer actively serving, I can be recalled to perform that service if my country needs me. While I am considered to be a private citizen by most, I am still a warrior at heart. No, as Dave Grossman says, “I’m a sheepdog” and I am willing protect the flock if necessary, although I may no longer have a strong desire to “confront the wolf”. I will certainly protect my own (my family and friends) if I am forced to the face a “wolf”. However, that is a job for the younger “sheepdogs” in our society if they are available. But, if they are not around, I won’t hesitate to do what I must if it comes to that.