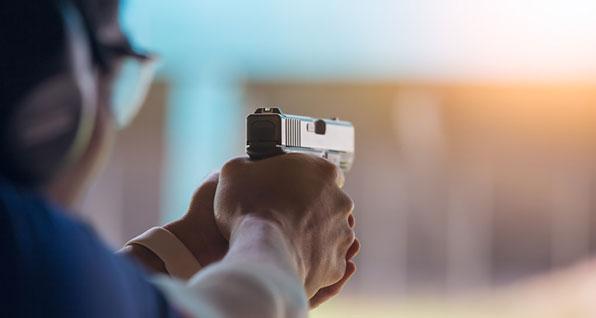 Shooting at the Speed of Decision Making

One of my struggles as a shooter focused on personal defense has been in the area of shooting faster. A couple of training courses I’ve attended had tests at the end of the course that put an emphasis on shooting fast. Most of the time, I’d watch myself and other students shoot fast and miss.

Misses aren’t acceptable in a gunfight, not only because they waste time, but because they can cause additional legal issues. When I shoot an occasional IDPA or steel match, my mindset is always to shoot the stages with no misses. You would think that might make me one of the slowest shooters, but I usually place in the top five, and I’m fine with that.

My professional career involves teaching university executive education programs and one of the programs I put together and teach is on the topic of decision making. If you find yourself in the real-life situation of managing an active threat, there’s going to be a lot of decision making going on in a very short amount of time - the kind of decisions that most of us aren’t familiar with making. Over the past few years, I’ve been working to bring these two processes (making decisions and shooting faster) together in my approach to shooting.

Here are two terms that can get confused in shooting – cadence and split time. Though they both essentially mean the same thing (time between shots), the mental picture created by the two terms can be quite different. Cadence refers to shooting at a speed appropriate for the threat. The key elements that should determine the appropriate cadence are sight picture, size of target, distance to target, and I’m going to add the time it takes to take in situational information and make appropriate decisions. Adding decision making to the mix is difficult to simulate on a flat range with paper/steel targets, so therefore it’s often forgotten.

I notice that when people talk split times, they are often talking about pure trigger speed. A drill I created for adding some decision making into a range session is a modification of the El Presidente drill. When the shooter's back is turned at the start of the drill, I make one of the targets a no-shoot target or place a hostage partially over one of the targets or tighten up one of the hit zones on one of the targets. The goal is to force the shooter to make some decisions when they turn around to shoot. I can guarantee you won’t be shooting sub four second times with these modifications. Courses that involve shoot houses with shoot/no-shoot targets are another great way to add decision making into the mix.

The general consensus is that it takes about 0.25 – 0.35 seconds for humans to react impulsively. The key word is impulsively. Psychologists use the terms System 1 and System 2 to identify the two key parts of the brain involved in decision making. System 1 operates quickly and impulsively, while System 2 operates deliberately and analytically. System 1 isn’t capable of handling complex things; that’s the responsibility of System 2. But here’s the problem: System 2 requires an invitation to get involved in a decision, and that invitation doesn’t come from System 1 because System 1 always has an answer even if it’s incorrect.

I would suggest that if a gun is in your hand you don’t want System 1 running the decision making process unless you’re an individual who has had a lot of experience in managing active threats and have thus built up a reliable database for System 1 to work from. Incorrect answers in a life or death situation don’t sound like a good idea. When System 2 gets involved, so does time. The 0.25 – 0.35 seconds will increase to up to 0.50 seconds. Shouldn’t that time be considered when discussing shooting cadence?

If your shooting is focused on fast split times (and I’ve seen drills/tests that would required split times less than 0.20 seconds to pass), you’re practicing to shoot faster than the speed of decision making. A well-respected national instructor who has been in a number of gunfights told me “anything faster than 0.20 is likely a waste of time. A skilled shooter should be able to do 0.30, but realistically, 0.50 is a likely solid working speed when delivering solid surgical hits and solid assessment.”

So what are some things you’re going to need to make decisions about in an active threat situation? Well, how about the first big one – do I need to shoot this person? Or, do I need to continue shooting this person? What if the bad guy turns to run away or goes down after your first two shots? If you’re shooting faster than you can make decisions, you’ll be sending rounds downrange to a non-existent target or into the back of a fleeing target. The faster you pull the trigger, the longer it will take you to decide to stop pulling the trigger.

Though I use a timer in my practice sessions, I don’t use it to measure split times. I also avoid too much emphasis on measuring draw-to-first shot times because there may be a circumstance when I might want to draw my handgun fast, but not fire a round. If all you do is practice fast draw-to-first shot, then you’re programming System 1 to repeat that impulsively in a real-life situation. It’s possible that we just saw this occur in the recent convenience store parking lot shooting in Florida.

When it comes to measuring time between shots, I prefer the term “cadence." Cadence should be based on the circumstances of the situation you’re in and the time needed to make the appropriate decisions based on what is happening through your eyes or through the front sight picture of your handgun. What you see and your decision making should work together to control your trigger finger. Hitting the threat should be the first requirement and doing it “as fast as possible” should be the second. You should only be pulling the trigger when you’re going to get a hit. Cadence trains you to adjust your shooting based on the circumstances of the active threat and your time to think, not just your ability to pull a trigger as fast as possible.

Bob Jewell has been carrying a concealed handgun for over 20 years. He is a Rangemaster and NRA Certified Instructor, a graduate of the Law of Self Defense Instructor Program, as well as an accomplished tactical shooter. He annually participates in firearms, legal, medical, and self-defense training from nationally-recognized instructors and teaches NEXT LEVEL self-defense handgun classes in Cincinnati, OH.