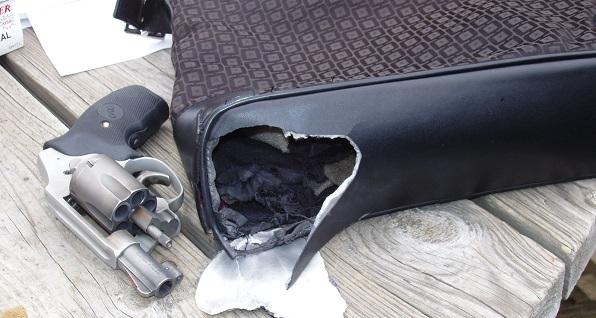 Shooting Through Bags and Purses

Although I generally don’t advise my students to carry their firearms off body, I recognize that lots of folks carry guns in purses and bags.

One of the stated “advantages” of such a carry method is the fact that you can fire the gun from inside the bag or purse without removing it in an emergency situation.

At [a recent] Rangemaster Tactical Conference, I assisted my friend Eve K. with her block on unconventional and off body carry methods.

Although I don’t carry a purse, I have a lot of experience actually shooting guns through bags and coat pockets. Eve wanted me to do some live fire shooting demonstrations at the end of the class. I readily agreed.

Eve and Frank from Apache Solutions filmed my shooting.

First up was shooting the hammerless revolver.

Hammerless revolvers are generally the best option if you have to take a shot through a bag, pocket, or purse. They are the only weapon type that will reliably function in that environment.

What I’ve found to be the best technique to get accurate shots is to allow your fired rounds to punch a hole through the bag out of which the muzzle can extend. That generally gives you at least the ability to see some part of the gun to align towards your target. Look at the picture below. That is after two shots without me trying to shove the gun through the hole. 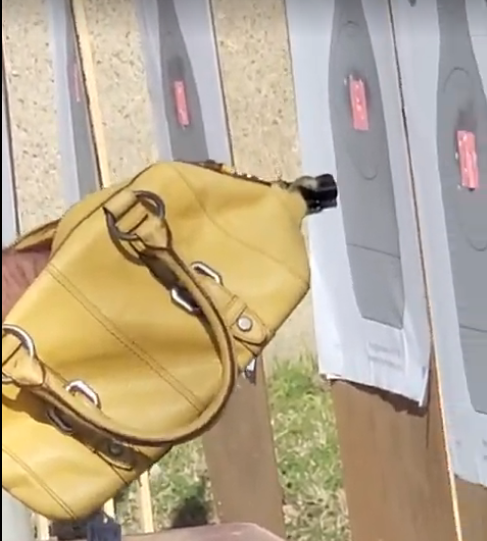 That same technique will make shooting revolvers with exposed hammers and semi-automatic pistols less reliable. With an exposed hammer gun, that muzzle movement brings the arcing hammer in contact with the material constructing the bag. The hammer grabs the material and the revolver stops firing. You can see that happening in the video below.

It’s hard to reliably shoot a revolver with an external hammer inside such a constricted environment.

Likewise, it’s difficult to shoot a semi-auto from inside a bag as well. Even if the bag is empty, the ejecting brass hits the side of the bag and falls down into the ejection port, creating a malfunction. Take a look at the screen shot below. 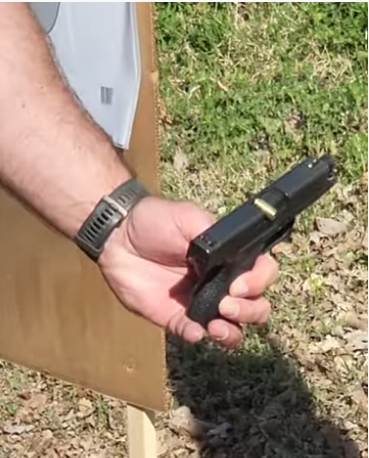 In addition to the malfunction problem, in such a tight environment, if the brass doesn’t get bounced back into the gun, it ends up laying on top of your shooting hands. It’s a good way to get some ugly burns.

Below is the entire video of my presentation. I have it set to start at the point where I shoot the Glock 43, but you can go back and watch the whole thing if you want. This one also includes me shooting Chuck Haggards’s .357 magnum LCR.

Bottom line is that you will want a hammerless revolver if you are planning on shooting through purses or pockets. If you try it with any other type of firearm, the results will be unpredictable. Even if it takes a bit of extra time, I strongly urge you to draw your gun completely out of the purse before you begin shooting.

Thanks to Eve for allowing me to assist her with the presentation. Thanks to Chuck Haggard for helping. Thanks to Frank Horvath and Tamara Keel for documenting the event.

But beyond that, much respect for all the male firearms instructors who took a class about purse shooting to be better able to advise their female students.