Although there are still a lot of revolvers out there, it's surprising the number of students who come to class that have never handled or fired one. You never know when you may come across one in a relative's sock drawer and need to check it out. There may be a situation where you have to use one for defense; there's no golden rule that says you'll always have your pistol. And who knows, someday you may discover the joys of shooting wheel guns. So, a short series of columns on basic revolver skills is in order. 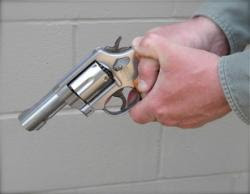 One of the first things about revolvers is that the way you grip them. You want the strong hand high on the backstrap, just like with a semi-auto, but the revolver grip is completely different. On semi-autos the thumbs are normally stacked, one held over the other. With revolvers the strong thumb is curled down, just as if you were making a fist, and the support thumb crosses over it. Gripping the revolver the wrong way can lead to problems.

You don't want the support thumb rubbing or pressing against the cylinder. With enough pressure against the cylinder the thumb "lock" it up, keeping it from rotating and locking in properly, which makes the trigger hard to press. Plus, depending on hand/pistol size the support thumb will get in the way of your trigger finger, forcing you to change the grip as you work the trigger or cause the gun to shift in the hands as it's fired.

As the revolver fires gas is released or vented to the sides due to the slight gap between the cylinder and the barrel. If the support thumb is sticking way out in front of the cylinder it catches this blast. This can damage the thumb, and with large caliber rounds it can actually blow the tip of your thumb off, a serious injury. (If you want to see the gory evidence of this search the 'net for "revolver thumb injury.") So, crossed thumbs it is.

With revolvers the support hand provides the majority of control over the pistol. In my mind about seventy percent or so of your control is achieved with the support hand. Again this is different from semi-auto pistols, where the strong hand is the one really controlling the pistol and the support hand basically assists in recovering from the recoil.

Later we'll touch base on revolvers again, covering some other fundamentals. There's still more to talk about on the grip, especially gripping so you get proper placement of the trigger finger. We'll go over manipulations like loading/unloading and reloading. Again, you may not have a wheel gun, but you never know when you'll come across one that you need to work with. In the meantime, stay safe. It's getting uglier and uglier out there every day.

Tiger McKee is director of Shootrite Firearms Academy, located in northern Alabama. He is the author of "The Book of Two Guns,"writes for several firearms/tactical publications, and is featured on GunTalk's DVD, "Fighting With The 1911."