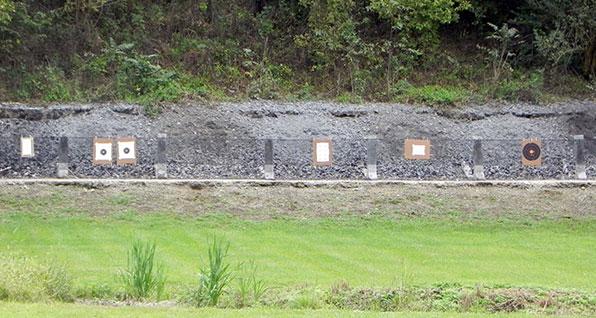 Spring Valley Wildlife Area range located in southwest Ohio's Greene County is the most popular ODNR Division of Wildlife public shooting facility. Now it is getting a major upgrade. It has been many years since the range facility was last renovated. It has served the shooting public well and met the demands of most shooters. However, it was starting to age so the Division of Wildlife made the decision to invest in the range so that it may better serve shooters, and hunters into the future. The unfortunate part is the range closed October 1 and is expected to remain closed until the fall of 2019.

Eric Postell, Division of Wildlife Program Manager, explains, "This project started approximately 18- months ago. There have been a lot of discussions to reach this point. We have an influx of the federal Pittman-Robertson monies for shooting range improvements. We wanted to make the most of the shooting sports opportunity at the Spring Valley Wildlife Area range. The project includes updating the backstops, additional safety features, easier entry with additional parking, a new archery range, expanded shooting range master building and other amenities. There were some environmental permits that had to be approved through the US Army Corps of Engineers, as well as, the US Fish and Wildlife Service. We've done our due diligence with all the proper plans and permits are signed."

Postell continues, "The first major improvement the public will notice when the range re-opens is a new entrance. We are eliminating the narrow winding road and steep hill that ran down to the range parking lot. That hill becomes especially difficult in snow and bad weather. The new entrance will be south of the existing entrance on Houston Road. It will cross the field alongside the new archery range. The current entrance will be gated closed and only used for Division of Wildlife access. The road will still be used to go from the parking lot up to the shotgun range. The shotgun range is not being moved, however, the firing line will be moved to better orient the direction of the shooting. "

The rifle range firing line will be significantly updated. New overhead covers along with new shooting benches will be installed. There will be some work to remove a low spot that was prone to flooding or standing water. A new berm will be added so that shorter 25-yard or 100-yard distances may be fired from several of the same shooting positions. The 25, 50 and 100 yard firing lines will be separated to provide individual cease fire situations. A new shorter range for concealed carry tactical shooting with a ten-foot wall to allow separate cease fire will be added. Security features already in place will be expanded and upgraded including cameras for the ranges and buildings.

The existing archery range will be removed and a new range built that includes 10 to 50-yard static targets. It will include locations for self-placed targets and a separate area for broad-head arrows with a pit backstop. There will be a utility pole so archers may bring a climbing style tree stand for practice. The current walking trail range will remain intact but with updated targets. Everything will be built to ADA compliant standards.

The larger building at the range, with an outside accessible restroom, has been used for a variety of educational and meeting purposes such as trapping clinics, deer processing and indoor archery. Postell adds, "This building will be used for equipment storage for both the range and wildlife area. This will also be a water treatment facility for the potable water supply. The current small range master building at the firing line will be demolished and a new building constructed. It will provide improved visibility to the firing line for the range safety officer plus restrooms, drinking fountain and a outdoor pavilion area with picnic tables for shooters to relax. The current porta-johns will be eliminated."

Postell explains, "The contract with Sutherland Construction is $2.4 million and that doesn't include the design, permits and consultant work that is already completed. Due to the cost of the project, the new education building that was originally planned is now delayed for a phase two effort. The footprint is in the plans and the infrastructure for the building will be included while dirt is being moved. The current plan is for that building to be put out to bid in January 2019."

Brent Fulks, Spring Valley Wildlife Area supervisor, adds, "The new education building will have an indoor archery range plus accommodate all the educational clinics. It will also have tables, water supply and modern electronic classroom capability. The building will be used as part of our recruitment, retention and reactivation (R3) efforts. We are planning educational programs from novice to the more advanced individuals. We want people to come here to get shooting training. We are planning to work with outside existing programs and partners."

The recent construction kick-off meeting with the ODNR Division of Wildlife personnel plus all the contractor project management personnel. Everyone discussed their role and the project plans for the upcoming week and short term. This meeting will be held, normally via teleconference call, on a regular basis to monitor status. This provides all parties the opportunity to address any issues and take needed corrective action on a timely basis. All parties working together is critical for the project to be successful and completed in a timely manner.

Fulks notes, "Most people are pretty excited about what we are doing. Any initial disappointment usually disappears when we explain what we are accomplishing with the range. We did look at staging or staggering the work to keep some portions of the range open. However the cost became prohibitive with a huge increase in the overall timeframe. A longer construction time would mean more weather concerns. It just didn't work out to be a viable solution or smart use of the sportsmen dollars. "

Jim Shanks, ODNR Division of Wildlife Range Attendant, echoed those sentiments, "There is never a good time to close the range. Most of our shooters are excited about the future range with everything brand new. The new range building will be a huge improvement. The restrooms, water, drinking fountain and rest area will be welcome additions. The new road will allow us to keep the range open more days. It is time for an upgrade and positioning to provide service well into the future."

Overall, this is an exciting period for the Spring Valley Wildlife Area range. It is good to see the ODNR Division of Wildlife making a commitment to the future of the shooting sports. Other ranges, such as Woodbury in Coshocton county, have been upgraded and work is in various stages of planning for other ranges. The popularity of the shooting sports, new shooters, and especially the lady shooters, demand modern user-friendly affordable, and of course safe locations, to shoot. The ODNR Division of Wildlife is stepping up to provide more opportunities for shooters.