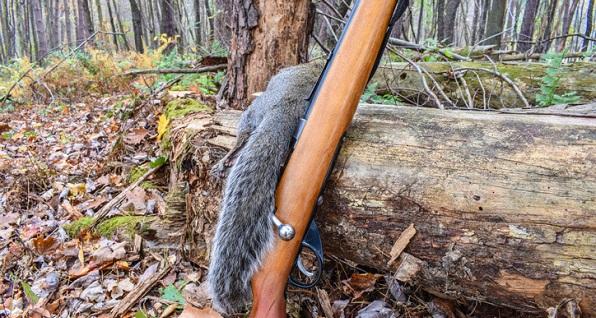 Let’s face it, squirrel hunting has never been as popular as deer hunting, but chasing bushy tails can be an excellent way to introduce urban and inner-city people to the sport of hunting. Despite what some have been led to believe, urban and inner-city people do have an interest in hunting. While city dwellers may be more accustomed to seeing a squirrel sitting on a park bench, they will be surprised to learn that squirrels make delicious table fare. Furthermore, squirrel hunting offers a lower price of entry and increased likelihood of a newbie returning to the woods on their own. Since the reader of this article will likely be someone already involved in hunting or interested in introducing others to the sport, insightful information will be given to provide the reader with more skill in reaching diverse urban populations. So, let’s look at why squirrel hunts are ideal for introducing city dwellers to the sport of hunting.

First, we need to find our audience to do a squirrel hunt. This can be easier than one may think if you know where to look. School, social organizations, churches, and social media offers a buffet of potential hunters. The ability to set social perceptions and stigmas aside is critical if we achieve results. Folks from the city may look different, dress different, and talk different, but their mutual interest in hunting is what we should home in on. A common tactic that I have used to find my pool of city hunters is to seek out opportunities to stand before groups, kids and adults alike, and ask two simple questions; “Who has ever been hunting?” and “Who would like the opportunity to go hunting?”. These questions usually spark discussion and interest among the audience and produce a pool of people ready to go hunting. Perhaps the biggest obstacle one will face when introducing city people to squirrel hunting is getting them to see squirrels as a source of food and overlook the fact that they are rodents. One can usually close the deal by talking about “survival” to overcome this obstacle. The urbanites interested in going hunting are traditionally the more adventurous types and those with an innate interest in being self-sufficient. 2020 served as a wake-up call for many. And combined with the fact that many Americans were sustained and raised on squirrels, so much so that squirrels have their rifle, the “squirrel rifle” is used for hunting squirrels, pun intended. In an actual survival situation, we will be eating squirrels, birds, possums more than we will be eating deer and turkey or elk. Why? Because small game such as squirrels is more plentiful and easier to acquire. Sometimes we have to coax our audience into going hunting, and taking a freshly cooked batch of battered and seasoned squirrels may be the kryptonite needed to win over a hesitant hunter. A recent experience with an urban Louisiana squirrel hunter comes to mind. I accompanied Vincent, a diehard air-gunning squirrel hunter, on a hunt. He proudly announced that during the 2020-2021 season, he shot 200 squirrels and that during the 2021-2022 season, he was up to 172 squirrels. I asked if his freezer was full, and he said, “Nope, I don’t eat them; I give them all away .” When I asked why doesn’t he eat them, he indicated that he never had the interest in eating one, didn’t think that they looked like something he wanted to eat. As luck would have it, another hunter had brought along two one-gallon bags of battered and fried squirrels, cold from being fried the night before. Vincent was encouraged to try a piece of squirrel, and when he did, it was a life-changing experience. We sat there and watched him eat about three pounds of a fried squirrel without stopping. He loved it and couldn’t believe that he had been giving away something that tasted so delicious and swore that he’d never give away another squirrel! Please don’t dismiss the opportunity to let your audience taste what they will be hunting.

One of the biggest perks of squirrel hunting is having fun with friends and family. Unlike big game hunting, where one must be quiet and constantly aware of the wind, a squirrel hunter can be more relaxed and partake in a few jokes. This within itself makes squirrel hunting perfect for introducing people to the sport of hunting. After all, where’s the fun if you cannot talk about the experiences one is seeing on their first hunt? Another benefit of a squirrel hunt is that it can be done just about anywhere, and gaining access to hunting land can be more accessible when compared to deer hunting. Nobody seems to care about squirrels, and some landowners will gladly allow one to come to reduce the squirrels ravaging their fruit or nut trees. However, if one does face issues finding private land, public hunting land opportunities can usually be found within a couple of hours drive of most major cities. Public land such as Wildlife Management Areas (WMA) or National Wildlife Refuges (NWR) may be a better option for taking groups of people squirrel hunting. Speaking of groups, unlike big game hunting, squirrel hunting has the added advantage of allowing groups of people to walk through the woods or to position themselves throughout the woods in search of squirrels. Hunters can talk, joke, and interact with each other in ways that big game hunters cannot. Odds are, one will stand a better chance of getting people from the city to go hunting if they can bring a friend or two.

The best part about squirrel hunting is that it doesn’t take much to get started. Everyday clothes, some good durable shoes, a gun, a blaze orange hat and vest, and a hunting license are needed. It doesn’t get much simpler than that. The selection of a firearm or hunting tool is perhaps the most crucial choice a new hunter would have to make, as the options are endless. Shotguns are hard to beat when squirrel hunting, as they allow hunters to hit a running bushy tail as it moves from tree to tree or tries to use leaves for concealment during the early part of the season. A .22 rifle is the ideal tool for harvesting squirrels. And it has likely taken millions of squirrels across the country since its introduction in 1887. Air rifles are another popular option for hunting squirrels as thousands of American youth, particularly those in urban environments, likely used an air rifle when they learned how to shoot. Slingshots and bows and arrows are also legal methods for squirrel hunting, but it is likely that when taking an urban person on a squirrel hunt, they will be using a shotgun, .22 rifle, or air rifle. Under no circumstances should a person just be given a gun and taken into the woods to hunt. It is wise to schedule a range session where one teaches the new hunter about the firearm and marksmanship. Doing so will increase their chances of success and decrease the chances of a firearm-related accident occurring on the hunt. Don’t be surprised if city dwellers already own a gun suitable for hunting. Just because they live in the city doesn’t mean that they are not legally armed.

The new hunter looking for a place to hunt may have better luck gaining access in closely populated areas if they hunt with an air rifle or shotgun due to their limited range. Most people will dismiss an air rifle as a toy or marginal for squirrels at best, but a pellet gun can be highly effective on squirrels. A squirrel dinner is almost guaranteed if one can get a .177 or .22 caliber pellet at 700 fps to 1100 fps to connect on a head or shoulder shot. More advanced air guns shoot pellets up to .35 caliber or larger and can quickly drop squirrels. Collateral damage from a high velocity .22 cartridge in populated areas can be reduced by utilizing subsonic ammunition, which will reduce velocities to 1050 fps, but still pack a wallop on a squirrel at moderate ranges.

When introducing hunters to the sport, it is vital to make it as fun and productive as possible; and this is where adding a dog to the hunt can liven up the action. If one wants to give city dwellers a squirrel hunt to remember, find someone with a good squirrel dog and let the amazement begin. Most city people are used to seeing dogs, some may even own one, but few have likely ever seen a hunting dog in action. Beagles may be the name of the game when it comes to rabbits, Walkers or Blueticks may be the choice for raccoons, but it is hard to beat a Treeing Fiest or Cur when it comes to squirrel hunting. Success rates will go up 100% as the dogs will track the scent of the squirrels. Keeping the hunters engaged will also increase 100% or more as it is likely that most people from the city have never seen a hunting dog in action or have any idea that there are dogs bred for the specific purpose of hunting squirrels. In February 2022, I had the pleasure of hunting over a world champion squirrel dog named Pirogue, owned by Owen Grayson, and I can attest to the increased success one can have when using a squirrel dog. Several squirrels were found, three were harvested, but none would have been found had we not had the dog.

When it’s all said and done, squirrel hunting is an excellent way to introduce urban dwellers to the tradition of squirrel hunting. Although they may live in cities, people realize the importance of being self-sufficient and being able to feed their families if the need arises. Learning to squirrel hunt can provide the skill set needed to do just that. Best of all, squirrel hunting is an activity that can be easily duplicated after one’s first experience. If one likes the introduction, they may even consider getting a squirrel dog, giving them a completely different perspective and connection to hunting squirrels. After all, squirrels are delicious, as Vincent can attest to. It doesn’t matter if they are fried, baked, sautéed, grilled, or roasted over an open fire. The important thing that we can do is to use an overlooked and sometimes mocked game animal to introduce more people to the sport of hunting. Keep hunting!

Republished from The Hunting Wire.