The Ohio deer season and especially the upcoming deer gun week always generates a lot of hope and excitement. This year the added bonus of having our first rifle season using a limited number of straight-walled cartridges (SWC) for rifles is creating some additional excitement. As with anything new there is some confusion. So the first thing is a look at the rules and then some common-sense approaches to keep everyone out of trouble. 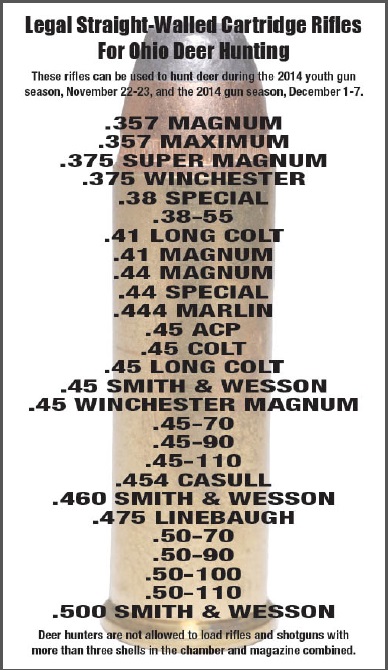 The allowable SWC for rifles are specified in the Ohio Hunting and Trapping Regulations 2014 - 2015. They are on page 9 of the booklet which is available at Division of Wildlife offices and license agent outlets. (See the attached graphic) The book may also be downloaded from the Division of Wildlife website at www.wildohio.gov. Among the shooters I've encountered at ranges and gun clubs the most commonly discussed calibers are the .357 Mag; .44 Mag; .444 Marlin and the .45-70 cartridges. All are excellent choices for deer hunting with a variety of ammunition readily available (if you are willing to pay the price). I am using the.45-70 in a Marlin Model 1895. My hunting buddy and his son have both opted for the .444 Marlin. A good friend is using his antique Springfield Trap Door in .45-70.

One needs to understand their firearm and ammunition especially when dealing with the .45-70. There is a wide variety of ammunition and reloading specifications for the .45-70. However, some of the ammunition, such as the new Hornady LEVERevolution, is not safe to use in the older guns, such as the Springfield Trap Door, whose action is not as strong. Those reloading should carefully follow their reloading manuals. My manuals list separate loads for the Trap Door, Marlin, and Ruger #1 rifles.

The Division of Wildlife conducted field training regarding the firearms using the SWC. Not all officers may be familiar with some types of the older firearms, such as the Trap Door. Officers were presented with the various cartridges and the firearms. They were given instruction and hands-on training on all the firearms types so they can safely check the firearms in the field. The officers were also given a ballistics overview of the SWC performance. Generally, these firearms are no more powerful than the current inline muzzleloaders or deer slug guns using sabot bullet technology.

An area of confusion seems to be in the revision to the three-shot limit rule. Previously the rule required that a shotgun had to have a plug in the magazine to limit the capacity to two rounds in the magazine and 1 round in the chamber. The addition of the SWC rifles presented a dilemma. While shotguns are easily plugged many of the lever action rifles are much more difficult possibly even requiring a gunsmith. Cowboy Action shooters certainly didn't want to insert a plug for deer hunting but have to remove it for competition. The Division of Wildlife removed the requirement that the firearms be physically plugged but retained the three shot limit rule. Rifles and shotguns capable of holding more than one round of ammunition are not required to be plugged. However they may not be loaded with more than three rounds total. Normally this consists of one round in the chamber and two rounds in the magazine. Migratory bird hunters who might use the same shotgun for both deer and duck should be cautious about removing the plug from their shotgun. The federal rules require semi-auto and pump shotguns to be plugged for a three-shot limit.

Naturally there will be some who want to cheat the system. Most deer hunters, especially in certain public areas, often hear five, six, seven or even more shots on opening morning. There are either three hunters standing shoulder-to-shoulder or someone is cheating. There is no reason to cheat. Most of us get our deer on the first or second shot. Anything past that is largely a "Hail Mary" shot with the odds increasing that the deer will be wounded and not recovered. Yeah I've heard the stories of the running shot kill on the fifth round. It's unsafe and not needed.

Some Wildlife Officers have expressed concern that hunters will load up the magazines and, when approached for a field check, will frantically attempt to unload their firearm. This could create a dangerous situation for the hunter and others in the group, as well as the Wildlife Officer. I spoke with Greene County Officer Matthew Hunt about what happens during a field check, how the officers are trained to approach a field check and what they want the hunter to do. The answers are amazingly simply and common sense.

Officer Hunt explains, "Whenever I go to a hunter education class I address the issue of field checks. It seems that people often get crazy when they see the Wildlife Officer approaching. They start doing things like unloading their gun. This usually results in swinging the muzzle in an unsafe direction especially when there is a group of hunters. It is really simple and follow the basic rules of safe gun handling. Keep your gun pointed in a safe direction and keep your finger away from the trigger. Wait for the officer to provide instructions. I prefer they hand the firearm to me while they get their license from a wallet. If there is a need to check for a plug or check the three-shot limit I can safely do it."

The Ohio Division of Wildlife has worked with Buckeye Firearms Association and other groups to develop the rules for the new SWC. We have an opportunity to enjoy a different type of firearm during Ohio's deer gun week. It's up to the deer hunters to be ethical and play by the rules. It's not difficult and there really is no need or great advantage gained by cheating. While the odds of getting caught may be small, the price could be quite large. How we behave in the field makes a difference the next time we want the rules changed. It makes a huge difference in the non-hunting public's view of hunters.