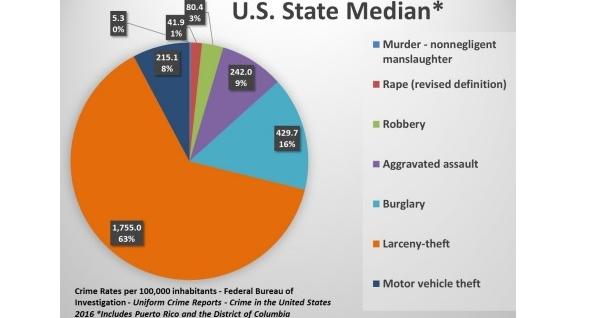 Think it's ok to leave your gun behind or neglect training? Statistically speaking...

[If you're reading this,] I assume you have taken a firearms training class with the goal of improving your self-defense abilities. Many, if not most of you, have obtained a concealed carry license. However, statistics show that most of you do not carry a gun on a regular basis and you do not seek any additional training beyond your first firearms class. The reasons for this vary from being too busy to bother with training, not having the money to pay for additional classes, to feeling you are living and working in a safe environment where you don’t need to carry a gun to defend yourself — besides, it is uncomfortable. But, is this reality? Are you really safe? A search of the Internet shows some interesting statistics.

The U.S. Department of Justice and Federal Bureau of Investigation (FBI) define and track two major categories of crime, property crimes — burglary, larceny-theft, auto theft — and violent crimes — murder, rape, robbery, aggravated assault. Of these two categories the majority — 77% — are property crimes. The government reports that the overall crime rate in the United States has been declining for the past couple of decades. The rates tend to be higher in urban areas than they are in rural areas—population density has a lot to do with this. Statistics show that 1 out of every 100 people over the age of 12 will be a victim of crime sometime during their life.

The most common crime in the U.S. is burglary with about 2.3 million to 2.6 million of them occurring every year, about one every 13 seconds—the Bureau of Justice Statistics places the number of burglaries in the U.S. higher at 3.7 million per year. (Burglary is defined as entering a building or residence with the intent to commit a crime.) Over 85% of burglaries occur in residential areas with 66% of them involving home break-ins. (Home break-ins or home invasions are defined as the forceable entrance into an occupied residence regardless of whether the people living there are present at the time.) Most burglaries occur during daylight hours (6AM to 6PM) when people are away from their homes at work or school and last 8 to 12 minutes. For the same reason, business break-ins primarily occur at night. About 30% of the time, someone is home when a burglary takes place and of those, 25% become victims of violent crimes when they interrupt the burglar. From 1994 to 2010, there were over 1 million home break-ins per year in the U.S. with almost 40% of assaults and 60% of rapes occurring during these home invasions.

Most burglars are young males and about 65% of them know the people they rob. About 12% of them carry a firearm. The burglars are looking for cash and anything they can turn into cash — electronics, jewelry, guns, tools, automobiles, bikes, medication, or documents they can use to steal the victim’s identity. The first place they look is the master bedroom. The average loss from each burglary is $2,416, with the total loss each year being over $5 billion. For 2018, the estimate was $16.4 billion. The highest burglary rate is in July and August when many people are on vacation. The fewest occur in February because criminals don’t like to be out in the bad weather. People that rent are more likely to be burglary victims than those that own their homes. Over 50% of the homes that are burglarized have it happen again within 4 to 6 weeks. Only about 13% of burglary cases are solved due to a lack of witnesses and evidence. It is estimated that over the next 20 years, 75% of the homes in the U.S. will be broken into.

A violent crime occurs about every 25 seconds in the U.S. For 2019, preliminary data indicates the overall rate of violent crimes decreased by 3.1% compared to the first half of 2018. For 2018, Detroit (Michigan) had the highest violent crime rate of the top 50 cities in the United States with populations of 100,000 or more, followed by Memphis (Tennessee), Birmingham (Alabama), Baltimore (Maryland), and St. Louis (Missouri). Despite the large number of murders that occur there, Chicago was 29th on the list because it has such a large population. When it comes to murder, the most dangerous places in 2019 were St. Louis, Baltimore, Detroit, New Orleans (Louisiana), and Baton Rouge (Louisiana). FBI data indicates the most likely violent crime you will be faced with is an armed robbery. Of course, the reality is that your chances of being a victim of crime are affected by where you live and work, and the job you have.

So, does living in Ohio make you safer than these other places? As indicated above, Ohio does have a higher crime rate than the national average (see above chart). When it comes to Ohio cities, Cleveland was #7 on the overall list for 2018 of the top 50 cities with the highest violent crime rates, followed by Dayton (#36), Akron (#45), Toledo (#46) and Cincinnati (#48). Columbus was the only Ohio city with a population of 100,000 or more that was not ranked in the top 50.

In 2015, Dayton was ranked the 23rd most violent city in the U.S. There were 573 violent crimes in Dayton during the first half of 2016, including 9 murders, 44 (reported) rapes, 202 robberies, and 318 aggravated assaults. When it came to property crimes, there were 3,354 reported, including 977 burglaries, 2,023 larceny-thefts, and 347 auto thefts. In 2018, the overall crime rate in Dayton was over two times higher than the national average, with 97.3% of American cities having a lower crime rate. For the first half of 2019, there were 630 violent crimes in Dayton including 10 murders, 93 rapes, 151 robberies, and 376 aggravated assaults. Then came the mass shooting in the Oregon District which moved Dayton to be rated as the 7th most dangerous city in the U.S. for 2019. Property crimes for the first half of 2019 in Dayton totaled 2,635 and included 701 burglaries, 1,537 larceny thefts, and 361 auto thefts.

If you live in nearby Springfield, Ohio, the picture is even worse according to Neighborhood Scout (https://www.neighborhoodscout.com/oh/springfield/crime). Springfield is only safer than 2% of the cities in the U.S. The rate of violent crime is better than Dayton’s at 5.67 per 1,000, but the property crime rate is worse at 52.98 per 1,000. Springfield’s overall crime rate is 58.65 per 1,000 people, again worse than Dayton’s. You have a 1 in 176 chance of being a violent crime victim in Springfield and a 1 in 19 chance of being a property crime victim. For the most recent reporting year, Springfield had a total of 13 murders, 21 rapes, 143 robberies, 159 assaults, 699 burglaries, 2,204 thefts, and 238 auto thefts. Again, these rates for Springfield are much higher than the averages for Ohio and the nation. The number of crimes per square mile for Springfield is the same as it is for Dayton.

So, if you live or work in Dayton/Springfield or you travel to/through them regularly, are you safe? Do you need to be concerned about protecting yourself, your family, and your property? Well, the statistics above should cause you some concern.