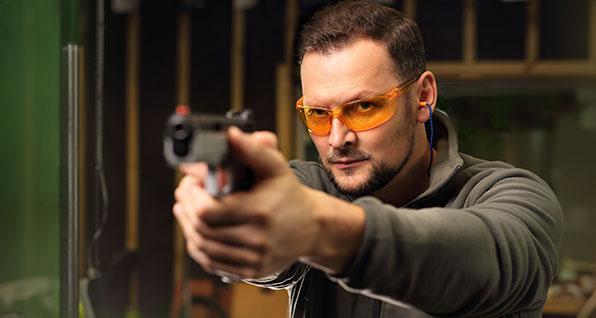 When you go shooting, what do you use for your target? I know when I was growing up we used whatever we could find—bottles, cans, cardboard boxes, pieces of wood, etc. Paper targets were expensive in those days when a 50-round box of .22 LR ammunition cost 30¢ or less. In the rural part of Michigan where I grew up there was hardly a roadside traffic sign that was not riddled with bullet holes—not by me, my dad was a part-time cop and I couldn’t have stood the consequences if I was caught doing such a thing! I don’t remember bothering with shooting any printed target until I was in college and started shooting on a pistol team. Then we used standard NRA bullseye targets typically set 25 feet downrange. But I still continued to use whatever was available when I went out “plinking”, which is what I did whenever I wasn’t on a formal shooting range.

When I started teaching concealed carry classes, I would—and sometimes still do— use paper picnic plates or 81⁄2 X 11-inch pieces of paper placed 3-7 yards downrange for the targets. Accuracy was/is not a concern for these basic shooting classes. “Defensive accuracy” and being able to shoot a group is more important. Another reason for using such generic targets is the NRA does not allow more realistic human silhouette targets to be used while teaching their basic firearms courses. These entry-level NRA courses are more focused on safety and recreational shooting than they are on self-defense. In a blogpost, Dave Spaulding (Handgun Combatives) challenged firearms instructors to make their training more realistic (see http://handguncombatives.blogspot.com/2016/08/a-message-to-instructors.html). As Dave points out, “two or three practice sessions a year does not a shooter make... [but] if that is all there is going to be, those sessions should be the very best”! He goes on to state that a proper self-defense firearms training program must include building skills in the fundamentals (how to operate the gun), combatives (how to fight with the gun), and interactive aspects (force-on-force scenarios, decision making in a crisis, etc.). He feels without these an individual is ill-prepared for an armed conflict. I agree with Dave on this.

The basic concealed carry training—which is all that the vast majority of individuals interested in self-defense firearms training get—is solely focused on the fundamentals. It does not deal with “combatives” or interactive skills at all. Indeed to find a training class that covers all three aspects means you will have to take a multi-day course— typically 5 days in duration—at one of the premier training schools like the Gunsite Academy, Thunder Ranch, or TDI. Very few individuals have the time or the finances to be able to take such a training course, although I have the “Gunsite 250” class on my “bucket list”. Most firearms instructors providing basic concealed carry training do not have the facilities or the equipment required to offer more extensive training. One of the reasons I created the Advanced Concealed Carry series of courses is to address this shortfall by dividing the material up into 3 (so far) more manageable one-day classes. (Even so, I have not yet tackled the “force-on-force” aspects because of the considerable investment that would be required on my part to acquire the necessary equipment, etc., and I only really address the “crisis decision making” aspects in my separate, non-shooting, Self-Defense Realities course.)

But, given the limitations I and other firearms instructors face, there is something we can do to provide more realistic training and that centers on the targets we use during our various courses. Instead of a generic bullseye target, one that more represents a human silhouette is more appropriate for self-defense training. After all, we are training to defend ourselves against another human being, so why wouldn’t we want the targets we use during training to represent a human being?

Lt. Col. (Retired) Dave Grossman, in his widely acclaimed book On Killing: The Psychological Cost of Learning to Kill in War and Society (©1995, ISBN 0-316-33000-0), documents how just changing the shape of the targets used to train U.S. soldiers increased their willingness to fire directly at an enemy from less than 20% (during the Civil War through World War II) to over 90% (in current conflicts in the Middle East and Central Asia). Grossman points out that normal humans are extremely reluctant to kill one another, even in the most extreme and intense situations that arise in warfare. However, changing the shape of the targets used to train soldiers from the traditional bullseye to a more realistic human silhouette significantly increased their willingness to engage their enemies on the battlefield. By making the targets used in training even more realistic— i.e. 3D images, videos, etc.—the willingness to engage increases even further.

Law enforcement agencies have noticed the same thing. They initially transitioned away from the traditional bullseye target to the B-27 silhouette target in the 1950s and 1960s. This is a more realistic human-like target but even it presents some challenges. The B-27 target has something resembling a “bullseye” imposed on the silhouette. However, this “bullseye” is not centered on where the human heart is but is a little lower...depicting where human organs are located. Studies have shown that a significant portion of the hits during officer-involved shootings for those officers that primarily train with the B-27 target are to the stomach area. They surmise this is a result of the officers mentally imposing the “B-27 bullseye” on the subject they are shooting at and thus their hits tend to be lower. Of course hits to the stomach area are not immediately incapacitating and thus the threat is often able to continue the fight longer than they would otherwise be able to.

With the growth of concealed carry licenses, various competitive shooting programs have arisen to provide regular opportunities to engage in more realistic self-defense practice. An example of this is the International Defensive Pistol Association (IDPA). They use a human-like silhouette target as well, but the shape is more generic and the various scoring zones are less visible. As a result, the shooter needs to place their shots in the center of the target (in the “A-zones”) to maximize their point totals.

Other competitive “action-type” shooting competitions rely on steel targets of various shapes and sizes. Steel is used to provide audible feedback to the shooter that the target has been hit. Some have smaller scoring zones where point totals are higher if they are hit. While the feedback is helpful— it is often difficult to tell where a paper or cardboard target has been hit especially as distances increase—using steel targets imposes some limitations. To protect the shooter and bystanders from being hit by ricocheting bullets, the targets must be placed at least 10 yards downrange unless “frangible” or low velocity soft lead bullets are used.

Photo-realistic targets are available that are often used by law enforcement and military special operators to train for hostile environments. Such targets can depict multiple situations and in addition to shooting accuracy they can also be used to help with the “interactive aspects”. The use of “shoot/no shoot” targets is especially useful for this.

A few years ago I took an advanced course where the instructor included targets of aliens and beautiful women. I asked him why, and he said that he’d found a significant number of his students were unwilling to shoot at the targets depicting women, or at least they hesitated before doing so. I’ve seen some studies that show the same thing. Would you be able to shoot at a woman? How about a child? Some of the available photo-realistic targets available today include images of pregnant women and children pointing a gun at you. Hesitation in engaging a threat could result in you being killed in a real-life violent encounter.

A “one target for all purposes” does not work very well, but that is what I find being used in the vast majority of firearms courses that I have taken. More realistic targets cost more than generic targets and most instructors want to minimize their costs when putting on a training course (or they have to charge more). Also, frequently changing targets adds time to the range session; time that is not spent shooting and most students want to maximize their “trigger time” while they are on the range.

Some instructors and shooting range officials are reluctant to use realistic human-like targets. Their reluctance seems to be centered on not violating the firearms safety rule of “never point your gun at something you are not willing to destroy” and on a concern for the perceptions created by using such targets for training. They want to avoid negative public opinion, especially from gun control advocates, that they are only encouraging violent by training people to shoot other people. Hopefully you will not fall into this trap. You need to ask yourself, if you are unwilling to point your gun at a human silhouette target, why are you even taking self-defense firearms training to begin with?

As someone concerned about your own life and the lives of other family members and friends, you owe it to yourself to get the best training that you can. Such training is not a one-time event, but must be continually refreshed. Routine practice sessions coupled with periodically (once every year or two) taking a firearms training course is what is needed. You should try to use the most realistic targets you can to psychologically prepare yourself for what will be the worst day of your life and one we all hope we will never have to face. There are plenty of sources for realistic targets, especially on the Internet.