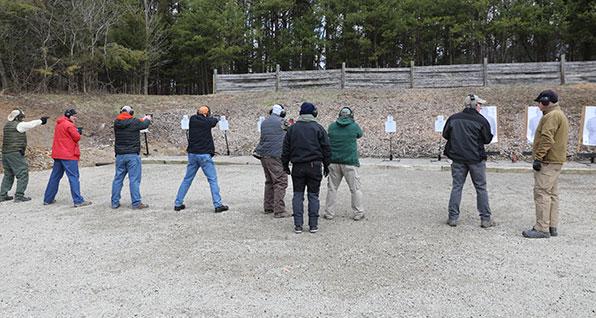 Training scars...we all have them.

All training, no matter how realistic, is artificial. It isn’t actual combat. In the interests of safety or convenience, we sometimes do things in training that we wouldn’t want to do in combat. If we continue to perform those artificial actions over a long period of time, they become habits. If negative, those habits are called training scars. Sometimes training scars are inconsequential. Sometimes they are fatal. Let me give you an example:

Some of the first identified fatal training scars in the law enforcement context occurred in a gunfight in 1970, later referred to as The Newhall Massacre. During this gunfight, four California Highway Patrol (CHP) officers were killed in less than five minutes. The officers displayed several training scars that day, which may have lead to their deaths.

The officers were not used to the recoil of their .357 Magnum handguns, having only fired .38 Special rounds in training. Their lack of familiarity with the magnum rounds may have contributed to their poor shooting performance.

One officer carried his shotgun at port arms position with the shotgun stock resting on his belt and the muzzle in the air, while approaching two dangerous armed criminals. That was the position officers carried their shotguns on the range for “safety” purposes.

Another officer fired his Remington 870 so fast that he actually ejected a live round. He was killed with an empty shotgun in his hand. It has been alleged that rapid fire shotgun training was not part of CHP’s firearms curriculum at the time and the officer’s lack of familiarity with the weapon lead to this potentially fatal error.

All of the above examples in this gunfight could be considered training scars. The actions that the officers unconsciously performed in training influenced their performance in combat. Not all training scars are as dramatic as these examples, but they can still reduce your performance when you are thrust into a deadly encounter.

In all my years as a full-time firearms and self defense instructor, I’ve seen many examples of negative training scars. See if you recognize any of these:

Shooters getting sloppy with the use of cover. Since some pistol competitions allow competitors to stick 50 percent of their body mass outside of cover on a barricade stage before assessing a penalty, many shooters will use their cover improperly so that they can move faster or get a better score. Constant repetition of improper cover use during competition leads to people getting shot in real life.

Malfunctions. I see this one with older police officers or soldiers. When they have a firearms malfunction in training, they stop and raise their hand so that the instructor can clear the jam safely.

Because malfunction clearance is one of the more hazardous activities in firearms training, some range officers won’t let their students clear a jammed gun. What happens when one of those students experiences a malfunction on the street?

No movement. Some instructors or ranges have rules restricting the shooter’s movement. The student gets thousands of repetitions firing a weapon while standing still. What do you think he will do in a real gunfight? You guessed it; he will stand still, even if moving to cover or retreating would be a better tactical option.

On my range when a student runs out of bullets for his primary handgun during training, he must either draw his backup gun and finish the stage or retreat to cover and draw an alternate weapon (knife, ASP Baton, OC Spray, etc.). I don’t want students to get in the habit of going into “administrative mode” as soon as their guns are empty.

This leads to students having distinctly separated skill sets. They are unable to smoothly transition between force options because they have never been trained in a realistic context. Real world violence is often a match between people with differing skill sets and differing weapons.

Having the ability to seamlessly transition from empty hand striking techniques to firearms shooting and back to empty hands again is a crucial skill for everyone to master. When the disciplines are not trained in an integrated manner, negative training scars are the result.

Sporting Rules. Every competitive martial art has different rules. Fighters spend many hours training within the context of the rules of their sport. When they end up in a real fight, they continue to obey the artificial rules imposed by their particular style.

I’ve seen Tae Kwon Do fighters who won’t punch to the body, wrestlers who turn their backs on opponents and get choked, boxers who won’t throw a knee strike in the clinch, and ju-jitsu practitioners who don’t know what to do when a “chemically enhanced” attacker doesn’t tap out on the street because he feels no pain. Consider how the rules of your sport leave training scars that adversely affect your combative abilities.

Firing a set number of rounds in training. I see this one all the time. Officers draw, fire two shots, and immediately holster without regard to whether or not they hit the target or if the rounds (when using Simunition FX marking cartridges) had the desired effect. They do so unconsciously because some stage of their state firearms qualification course consists of doing just that.

Famed NYPD Stakeout Squad member Jim Cirillo recounts a similar situation in one of his interviews. He was in a very close-range gunfight where he fired five shots at the robber from the hip. He then stopped shooting and holstered even though the robber was still standing and his gun was still loaded with another round.

It seems that one of his stages of qualification was “Draw, fire five hip shots, and holster.” He had done that so many times on the range that he did it in combat as well. Always vary the number of rounds you fire in each practice session.

These are just a few of the most common training scars I deal with every day as a trainer. If you think about it, you could probably identify half a dozen different training scars that affect your individual performance. Your goal should be to analyze which scars are negative and to eliminate them.

In order to best eliminate training scars, a comprehensive knowledge of what actually happens in combat is a necessity. Combat is not the same as a shooting match or martial arts competition. It’s even less similar to any of the shooting drills you likely did in the police academy or in your CCW course. Strange things happen in combat, and the more familiar you become with these anomalies, the more prepared you will be to effectively deal with them.

Read everything you can find about the psychology of combat. Study newspaper, magazine, and television stories that involve violence. Talk to people who have been in fights or shoot outs. In short, learn everything possible about what occurs during combative encounters. It is only when you have a realistic idea of what happens in real-life combat that you can take a look at your training and make it more realistic.

As you continue to learn about violence, start analyzing your training. The refinement of your training processes should be a constant activity. You will always learn more and be able to make your training better.

Take a look at every aspect of your training and ask yourself, “Would what I’m doing here be a good thing to do in combat?” If not, change it. A video camera or a knowledgeable and observant friend can help with this. Have a friend watch your training to help you identify potential negative training scars.

If you can’t enlist the help of a friend, set up a camera and review your next training session. Make it your goal to analyze every move you make with the objective of eliminating any motion or activity that would be counterproductive in combat.

After you have eliminated as many negative training scars as possible, start building positive training habits. Start doing activities in training that you want to do in real life combat. If you think it’s a good idea to move in a gunfight, fire every round while moving or practice moving laterally with every drawstroke.

If you think it would be a good idea to visually scan for additional opponents after a gunfight, build a scanning procedure into your practice regimen. The opportunities are endless and you will likely never be finished. Strive to identify and eliminate all of your negative training scars while replacing them with positive training habits.

We’ve learned a lot about training since that terrible day in 1970 when four police officers were killed. You have advantages in technology and knowledge that those officers could have never imagined. Don’t squander your opportunities and forget the lessons that those men gave their lives to teach.