A trauma kit in every school

In keeping with our effort to keep our children safe, Buckeye Firearms Foundation is announcing an initiative to put a trauma kit in every school building in Ohio.

Our FASTER (Faculty/Administrator Safety Training and Emergency Response) program has always maintained that we should take every reasonable step to save children’s lives. That includes steps taken before, during, and after an active killer event. While much emphasis has been placed on the before and during aspects of an event, too little attention has been paid to saving lives immediately after the killer has been stopped.

Exsanguination, or bleeding to death, can happen in minutes from a shooting injury. Even an immediate response to an active killer will almost certainly leave some casualties. It takes time for a scene to be declared safe so that medical personnel can attend to the wounded. That is time a bleeding child may not have.

Most school buildings have a first aid kit and an AED (Automatic External Defibrillator) with personnel trained to use them. Few schools have a trauma kit with the supplies needed to deal with trauma injuries. We are undertaking an effort to correct that shortcoming in our schools. 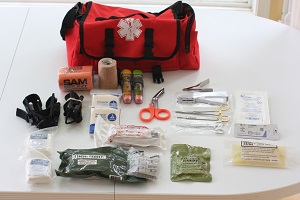 At a minimum, a trauma kit should include gauze, compression bandages, tourniquet, and a chest seal. Use of these item require minimal training and can be used in the immediate aftermath of the traumati event to stop bleeding and save lives. Just as school personnel are the real first-responders to violence, they also must be the first to administer basic medical care.

Quickly stopping hemorrhaging is a critical step that greatly reduces the chance of a victim going into shock which often leads to death. Through quick use of tourniquets, even major arterial bleeding can be stopped. Limiting blood loss increases survivability. School personnel must be able to quickly treat injuries, which will allow for the transfer of a stable patient to upgraded medical care.

Contrary to popular belief, use of a tourniquet will not result in the loss of a limb even when left on for several hours. Tourniquets are commonly used in hospitals during surgeries with no long term complications and have proven to have save lives on the battlefield.

Parents and teachers should ask about the availability of trauma kits in their schools. If they are lacking, politely insist that this shortcoming be corrected. Schools can work with local fire departments for training and advice on building a suitable kit.

Buckeye Firearms Foundation is working on partnerships to offer training and supplies to schools where needed. We will announce opportunities on our web site as they become available. We are also looking for sponsors to furnish a trauma kit to all FASTER graduates.

SIDNEY -- Keeping kids safe in our schools these days is as important as the curriculum. Now a group who advocates arming teachers is also encouraging schools to get trauma kits ready in case anything traumatic happens.

"Anything we can do to save our kids and make a safer area for them to be in, is excellent," said Joyce Vance who has been happy with the Sidney City School District's approach to protecting students.

"I feel comfortable that she's here," said Vance, referring to her granddaughter.

Not only are many staff members in each building trained to respond to an active shooter and have access to weapons; but each classroom has a small medical kit in case of any medical emergency.

"In the event of a gunshot wound or a large laceration, it can be put on and direct pressure can be put on the wound. That's a stop gap until we get medics into the situation," said Deputy Rick Cron, who leads the school response team.

Now district leaders plan on going one step further after recommendations from the Buckeye Firearms Foundation.

"We are well prepared but we need to be better prepared," said Superintendent John Scheu who says they plan to have trauma kits in each school, to include gauze compression bandages, even a chest seal and tourniquets, and train staff on how to use them.

"The tourniquet has saved many a soldier on the battlefield," Kron said.

The Buckeye Firearms Foundation hopes other a Ohio school districts will follow suit. Superintendent Scheu says he sees it as a one time expense that's worth every penny.

"Hopefully you would never have to use such a trauma kit but it's still being proactive and preparing for an emergency in which case I certainly think it would be appropriate to have the trauma kits available," Scheu said.

"Everything we can do to help the kids and save lives, that's what we want to do," said Vance.