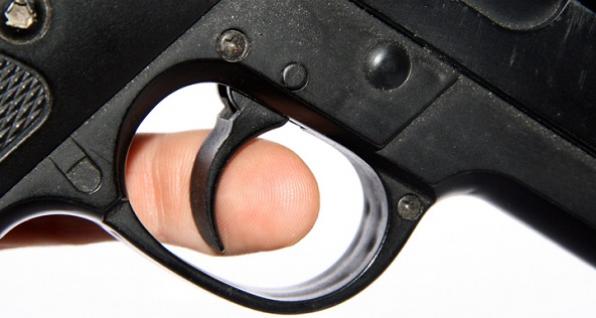 Trigger Geometry and How it Affects Your Shooting

I suspect most of you haven’t thought much about how your trigger affects your ability to shoot your gun beyond how much effort it takes to press the trigger and make the gun fire. But the basic design of your trigger can have a significant influence on how close your bullets impact the target compared to where you wanted them to hit it — i.e., your point-of-impact (POI) vs. your point-of-aim (POA).

In most cases, your trigger pivots around a pin that holds it into the frame of your gun. This pivot pin is usually located just above the trigger inside your gun’s frame. ...The trigger moves in an arc around this pivot point. ...Unless you are holding your gun very tightly, this is likely to cause the muzzle of your gun to dip downwards — and thus accounts for your bullets striking the target below your POA. This tends to be more exaggerated with double-action handguns, because the trigger must not only release the hammer, it must also cock the gun. The action of cocking the gun requires moving things farther than just releasing the hammer does. In the case of a double-action revolver, pulling on the trigger cocks the hammer and rotates the cylinder. Thus, it also requires more effort, and this accounts for the greater amount of force you need to apply to the trigger to get it to move.

Much less force is required for the typical single-action gun — both revolver and semi-automatic pistol — because the trigger only must move far enough to release the hammer, so it can travel forward to strike the firing pin and/or primer in the cartridge (some revolvers have the firing pin attached to the hammer, while in others it is a separate component). Less movement means the “arc” of the trigger is smaller.

Semi-automatic pistols that are double-action/single-action (DA/SA), or double-action only (DAO) require the trigger to operate in the same way that it does with a double-action revolver, at least for the first shot, except there is no cylinder to rotate.

John Browning came up with a different trigger design for his early semi-automatic pistols, including the Model 1911. Instead of pivoting, the triggers on these guns move straight back and press against the lower part of the sear, which in turn, pivots around a pin to release the hammer. This straight-to-the-rear movement results in much less tendency for the muzzle to dip downward. It is one reason that precision handgun shooters prefer the Model 1911 design over all others.

Now we need to add the action of the trigger finger to the movement of the trigger. As I’m sure your instructor told you, you need to “press” the trigger straight to the rear. However, as I’ve previously explained, doing this with a trigger that pivots also results in some upward movement of the trigger unless it is of the 1911 design. But your trigger finger also pivots, usually around the first joint/knuckle below the tip of your finger. Depending on whether you are right-handed or left-handed, this movement will be towards the rear and to the right or left side. The result is typically sideward pressure which tends to move the muzzle in the direction of this pressure. For right-handed shooters, this usually means moving the muzzle to the left. Combined with the downward pressure from the arc of movement of the trigger, the result is your bullets may be striking the target low and to the left of your POA — sound familiar?

Pulling on the trigger by placing your first joint/knuckle on it does give you more leverage, and some individuals find they need this additional leverage if they are shooting a double-action pistol with a trigger that moves a long distance. However, some lateral movement of the muzzle is likely to result. Thus, it is preferable to use the finger pad method to reduce this tendency to laterally move the muzzle.

One method some instructors advocate, especially when someone is having difficulty controlling the trigger on a DA/SA pistol, is to pull straight back with the first joint/ knuckle, keeping the finger between the tip and the second joint/knuckle as straight — and perpendicular — to the trigger as possible. This lessens the lateral pressure on the trigger and thus the tendency of the muzzle to move laterally.

Up to this point, I have not mentioned triggers on striker-fired handguns. They typically are of the pivoting-style, but instead of cocking a hammer, they “cock” the striker, either completely or partially, by moving the firing pin and striker straight to the rear and then releasing them. This usually takes less force than cocking a double-action pistol does, but more than what is required to release the hammer on a single-action pistol. The advantage of striker-fired pistols is the amount of force required to move the trigger is more consistent from shot-to-shot compared to that of a DA/SA pistol or DA revolver, and it tends to be more of a straight line rather than a curve or arc.

Of course, there are even more factors regarding the design of triggers that influence how efficiently you can press them. Some of these include:

Here you thought all the trigger did was to act like a “switch” to make your gun go BANG! But now you know what profound effect it can have on your ability to shoot accurately. So, when your firearms instructors talk to you about the importance of trigger control, you will now have a better understanding of what he or she is talking about.